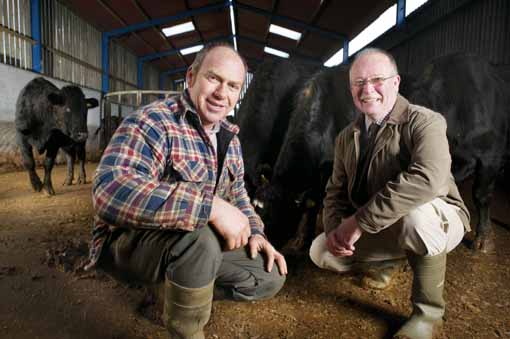 Technical efficiency is at the heart of profitable beef production. Jeremy Hunt summarises the key successes at Hopping Farm from 2011.

Latest EBLEX costings show the average and top one third of upland suckler producers recorded gross margins of £247 and £267 a cow respectively. However, when fixed and non-cash costs were deducted it left a net margin of minus £346 and minus £190 a cow respectively.

Says Mr Marsh: “Ease of calving and achieving as many kilos of gain at the youngest possible age are critical. Cattle with high growth rates make more efficient use of feed so feed costs a kilo of gain are reduced – as is time to slaughter.

“Rather than scaling back on cow numbers producers must now expand and spread fixed costs over a bigger herd. There is the opportunity to cull barren and poor performing cows and replace them with fit young, healthy bulling heifers – a situation driven by the buoyant cull cow trade which reduces replacement costs.”

“The key priority of Mr Frost’s Charolais bull selection is a positive Calving Ease Direct EBV with an accuracy of over 50%. He has total confidence in EBVs and even uses a Charolais on his bulling heifers which few producers would ever contemplate.”

Last year the Charolais bull Littlebovey Altra was used on the heifers. Altra has a Calving Ease Direct of +2.4% and his bull and heifer calves were born with an average weight of 41.9kg and 37.0kg respectively.

“But more importantly the calving score was only 1.8 and 1.0 so the vast majority of calves were born without assistance. Overall calf mortality last year was just 0.8%. Altra’s bull calves went on to achieve a carcase weight of 410kg at 13.4 months old,” says Simon Marsh.

The aim of the system at Mr Frost’s Hopping Farm is to achieve a 200-day weight that is 50% of the cow’s live weight.

Says Mr Marsh: “This can only be achieved with small to medium-sized cows put to high index sires. Last year Mr Frost’s cows weighed 595kg at weaning with the calves recording a 200-day weight of 336kg (bulls 370kg, heifers 302kg) – that’s an efficiency factor of 56.5%.

“It’s the highest I’ve ever seen. The calves receive some creep which is essential to grow frame and minimise the growth check at weaning, but they aren’t fed excessive amounts. Bull calves are given 90kg from early August to weaning in mid October.”

After four weeks on the farm the bull calves are eating 4.1kg per head per day and by six weeks it has increased to 5.9kg. The rate is gradually increased to 8.2kg fed to appetite. Heifer calves receive a flat rate of 3.1kg which is increased to 5.7kg at five weeks prior to slaughter. The home mix is always fed twice per day and silage is available ad-lib. 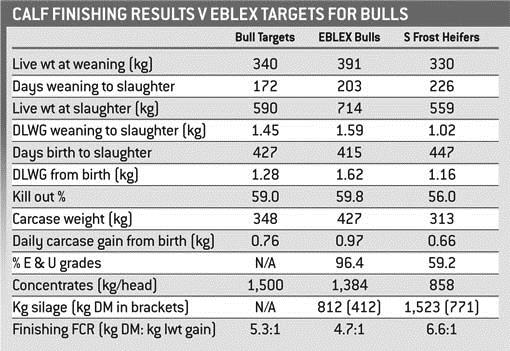 There were 62.1% of Mr Frost’s bulls achieving fat class 3 with 37.9% at fat class 4L. The “high flyer” was a Charolais calf sired by Balthayock Clifford. This calf was slaughtered at exactly 365 days old with a carcase weight of 471kg. It graded E3 and recorded a gain of 1.22kg a day with a kill out percentage of 59.8% – that’s a live weight at slaughter of 788kg and an impressive 2.04 kg DLWG from birth to slaughter.

“The calf would hardly exceed growth rates above 1kg a day in its first month of life, so this bull must have recorded DLWGs of nearly 3kg per day at its peak. We believe the daily carcase gain from birth to slaughter of 1.22kg is a world record for a commercially finished bull,” says Simon Marsh.

Cows are wintered on restricted, high dry matter big-bale silage and ad-lib straw fed in ring feeders. Minerals are offered from molassed mineral buckets which are high in magnesium, copper and selenium. Cows were weaned at score 2.28 and calved down at score 2.08.

Says Mr Marsh: “The EBLEX target condition score for spring calving sucklers at weaning in the autumn is 3.5, reducing to 2.5 at calving.

“If this was adopted by Simon Frost it would increase winter feed costs by over £45 per cow because of more purchased straw and expensive protein concentrate. Less home-grown big bale silage would be used.

“By reducing cow condition score to 2 over the winter with a weight gain of 0.3kg/day due to the growth of the foetus, Simon can feed just silage and straw to provide cows with 89MJ/day of energy costing just 49.8p per cow per day (83.8p/d with silage fixed costs included). Calving down at score 2 minimises calving difficulties.” 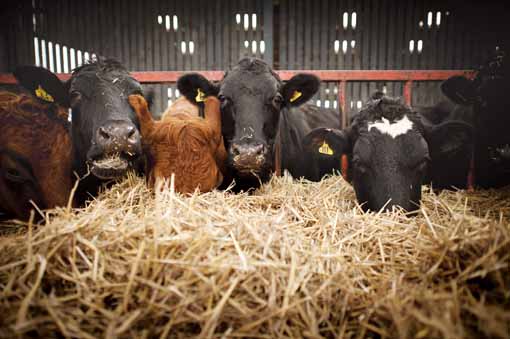 Things need to change in the beef industry. While cow and calf health, nutrition and genetics are all vital elements for profitable beef production, without efficient animals we are on a loser.

The Livestock Auctioneers Association must get involved and promote – at point of sale – cattle sired by parents with known EBVs.

The LAA and the current auction ring marketing methods could be viewed as an impediment to the effective sale and promotion of calves by high EBV bulls.

And there has been a reluctance on the part of some auctioneers to update their knowledge of desirable carcass traits – and it has meant a perpetuation of the belief that hindquarters are the most valuable part of the animal.

Auctioneers may – and do – argue that they merely facilitate an agreement between buyer and seller, thereby conveniently exempting themselves from taking responsibility for how they influence buyers’ decisions.

There is a marvellous opportunity for members of the LAA to embrace the concept and meaning of EBVs, and to realise that it should be encouraged as an entity and included in the information available to ring-side purchasers.

Put simply, if a pen of suckled calves has been vaccinated for pneumonia, and they are also by a bull with high EBVs for muscle and growth rate, the purchaser knows that not only will they be much less likely to contract pneumonia, but they are also more likely to grow efficiently and finish at the desired weight and classification.

Alan Dore, who buys my calves, says he would welcome EBV information for cattle he buys out of the ring.

So if finishers could purchase cattle sired by bulls with known EBV status, they would be paying for productive capacity rather than overtly pretty cattle – although the two traits are not mutually exclusive.

This would offer stability to their businesses as output and profitability could be gauged more accurately. This effect should then cascade into suckled calf producers’ decisions, encouraging them to focus on purchasing bulls with known EBVs, and in turn should act as a stimulus to pedigree breeders to re-orientate their considerable efforts towards producing terminal sires which are fit for purpose.

Unfortunately this will be achieved neither easily nor quickly, but the beef industry needs to move further towards operating in an environment which fosters the uptake and use of science and factual knowledge rather than gut instinct and smoke and mirrors.

Read all the articles from our Beef Focus Farm on our dedicated page.