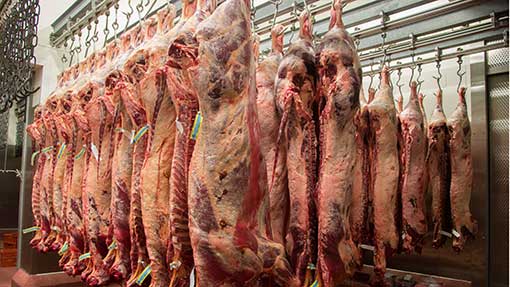 Tesco’s primary beef and lamb provider, 2 Sisters, scaled back processing British beef aged over 30 months (OTM) during the festive period, it has emerged.

A spokesman for 2 Sisters said processing British beef aged 30-36 months was down across all plants of its red meat division, including Bodmin, Merthyr Tydfil and McIntosh Donald – during three weeks at Christmas. Instead, the company said it was focused on processing primary cuts “to meet consumer demand”.

The decision explains why some beef suppliers in the South West complained about a lack of demand among some processors for domestic beef, especially cows aged over 30 months, during the festive period.

One farmer who supplies cattle to 2 Sisters in the South West described the situation as “like someone turning the tap on, and then suddenly turning it off”.

Last month, beef farmers claimed that following the horsemeat scandal, supermarkets were on a drive to source more cheaper foreign beef imports, especially Polish and Irish beef, to keep their margins down .

However, 2 Sisters strongly denied claims that its decision to cut back on sourcing domestic beef aged over 30 months was part of a deliberate attempt to depress the British beef price.

“It was just a straightforward logistics exercise as to how we best manage factory throughput,” said the company spokesman.

“No factory stopped production. However, across the board, we discouraged the supply of cattle aged over 30 months during that period.

“We were focusing on supplying the customer with what they required, which was less-than-30-month-old beef.”

The market for British beef has eased considerably since the summer, especially for out-of-specification beef. The latest average UK deadweight beef price is down about 22p/kg compared with the 17 July price.

2 Sisters said various processors were reviewing their buying sectors and payment grids in line with a view of their customer base. It said the ease in trade of older beef during the past few weeks was “largely a reflection of the marketplace at the consumer end rather than availability”.

However, the company insisted it was paying farmers a “competitive price” for their beef.

“If our prices were not competitive, the cattle would not be coming through the factory gate,” said the spokesman. “We consistently pay a reasonable price to our producers.”

Since January, 2 Sisters said it has been out buying “significant amounts” of fresh British beef.

“We are looking for larger quantities of British beef throughout our supply business and want to work more closely with producers,” added the spokesman.

“We are looking for clean beef to meet our traditional markets and that demand remains as it always has. However, we don’t have a market for specification of certain animals.”

But 2 Sisters confirmed all the produce it is handling in its red meat processing sector is British. “We are not handling any Irish meat,” added the spokesman.

Pete Garbutt, NFU chief livestock adviser, said: “There is a good deal of supply at the moment of meat that does not meet retail specification, such as plain or older animals. There is clear market advice for farmers to finish animals under those age banks.

“We understand the pressure and have discussed the matter with various retailers about whether they can make use of more of these animals in their supply chains, to try to boost demand for it. We will continue to have those discussions.”

Christopher Dodds, executive secretary of the Livestock Auctioneers Association, added: “We have seen some of the big processors trying to reduce the type of animal they are prepared to buy. But there is nothing to suggest that people are now put off by eating beef aged over 30 months.”