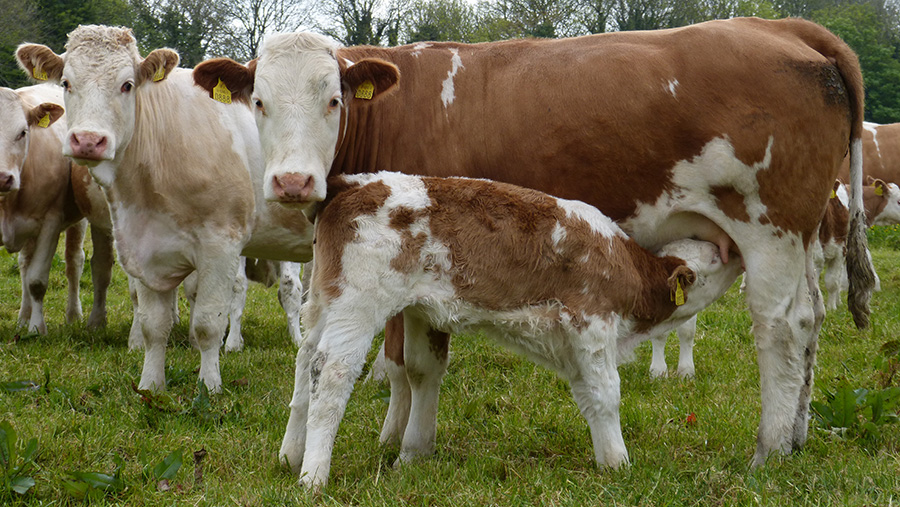 Beef production is worth nearly £2.76bn to the UK economy but making a profit without subsidies is a challenge on some commercial systems.

In Wales, figures from the most recent Farm Business Survey reveal after rent and finance charges are deducted, the profit per hectare on lowland cattle and sheep farms is £187 compared with £192/ha received from the Basic Payment Scheme.

In contrast, AHDB figures from 2015-16 show the top third of severely disadvantaged area (SDA) and lowland suckler producers made a profit of £27 a head by improving physical performance, increasing output and reducing fixed costs.

Meanwhile, the bottom third are making a loss of £155 a head.

So what steps can farmers in the bottom two-thirds take to improve efficiency and reduce costs? Debbie James spoke to experts in beef production to identify six key areas.

1. Make better use of grazed grass

“The aim is to achieve a three-leaf grazing strategy because as soon as the fourth leaf appears the first leaf is dying.’’

Paddock grazing will allow more stock to be carried on the same acreage or reduce the land area needed for the existing number, freeing up that land for other enterprises.

2. Get the right stocking rate

Understocking when spring grass is growing rapidly will reduce feed quality so, to keep a tight control of that quality and sward height, aim to stock fields more heavily during the spring while reducing the rate in autumn.

Recommended stocking rate is linked to factors such as fertiliser use, pasture quality and reseeding programmes but, as a guide, Mr Marsh’s recommendation for lowland farmers is 2,000-2,500kg liveweight/ha early in the season and 1,000kg at the end.

“If a heifer doesn’t get in calf in the first three weeks sell her fat because if she takes four months longer to calve she will cost you £150/year which, over 10 years, adds up to £1,500.’’

He recommends allowing bulls to run with the heifers for six weeks only or for two cycles. Any heifers bulling later are going to be less fertile. For cows, he says bulls should stay in for three cycles or nine weeks.

Select replacements from those born in the first 21-days of the calving season because they will be older and heavier at breeding and will be more likely to be cycling.

Mr Marsh, who says not enough focus has been given to maternal traits in recent years, warns against using bulls with very high mature cow weights or 400- and 600-day growth for breeding replacements as this will increase cow size.

The objective is to breed small- to medium-sized cows which are milky and prolific and can produce calves weighing 50% of the cow weight at 200-days, he advises.

Identifying two breeds that complement each other for the traits required by a producer can provide a 26.5% advantage over purebreds by improving characteristics with low heritability such as fertility and health.

“Crossbreeding allows you to select the breeds best suited to your management goals, market and environment,’’ says Mr Marsh.

“A mix of continental and native genetics will suit many farms,” he says. “However don’t ignore the beef cross dairy-bred suckler, provided they can be sourced with minimal Holstein breeding and not cause biosecurity issues.

“This type of cow has loads of milk for excellent calf growth rates.”

The grazing period in UK suckler beef systems is 140 days which means that the average cow spends 60% of her lifetime indoors.

For every day that grazing period can be extended, a saving of 60-90p a head a day can be achieved, according to AHDB Beef & Lamb’s Beef from Grass Project trials.

Combinations of winter grazing could include rape and stubble turnips supplemented with bales of grass silage, or deferred grazing, where stock are removed from a field in late summer to allow grass to build up and be fed later in the year by strip or block grazing.