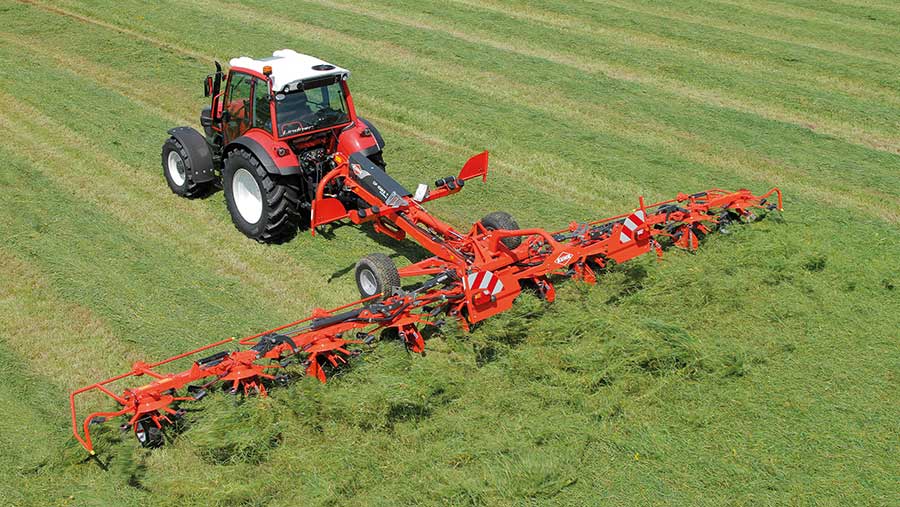 Cutting grass silage early in the morning and tedding the crop straight away can make wilting speed as much as five times faster, the results of two studies have shown.

The first trial took place on a farm in Pembrokeshire on a warm day last July (average temperature of 15.4C) using a light, multicut crop of grass.

See also: 4 tips to manage the risk of dry silage

Grass was cut at 10am and 3pm and three different wilting treatments were tested:

Findings revealed that cutting at 10am and tedding immediately resulted in grass reaching a target dry matter (DM) content of 30% in just 4.5 hours.

In comparison, it took grass seven hours to reach the target if it was not tedded until five hours after cutting, and a full 24 hours if grass was left untedded in rows.

Where cutting was delayed until 3pm, grass again reached 30% DM in five hours if tedded immediately after cutting, but took a full 23 hours if it was not tedded until the following morning.

Ecosyl silage scientist Mark Leggett, who led the study, says this was significant because the longer the crop is wilted, the more nutrients it will lose.

“Cuts taken in the morning consistently give a more rapid wilt irrespective of tedding treatments.”

Undesirable micro-organisms present will also multiply, feeding on the sugars and breaking down protein, he adds.

In comparison, rapid wilting reduces the risk of clamp effluent and produces a more nutrient-dense silage, with more sugar and protein retained.

The second trial in Carmarthenshire measured the impact on wilting speed of a heavy, mature grass crop and a lighter, multicut crop.

Grass was cut last September (the average day and night temperature was 13.1C) and crops were either left in rows, tedded immediately, or tedded twice.

The lighter crop (about 12t freshweight/ha), cut at 1pm, reached 24% DM in just four hours when tedded immediately, while if left untedded it had not reached 20% DM even after 20 hours.

The heavier crop – two to three times bigger – was cut at 11am and tedded immediately, and still reached 22% DM within five hours. In comparison, the untedded heavy crop only reached 21% DM after 23 hours.

“Cutting early and tedding the crop out can result in the best, fastest wilt you can get,” concludes Dr Leggett.

Dave Davies from Silage Solutions says the trial results are important, but not surprising.

“During wilting, you lose sugar and D-value. High sugar helps capture more protein for the animal to utilise.

“When silage is wetter, you need more acid to get the pH down to stop fermentation.”

“When you wilt through the night, you don’t get as rapid a wilt [due to temperature drops], so it is better to cut in the morning and pick up in the afternoon, like the trial showed, if possible,” says Dr Davies.

However, flexibility is required to account for weather changes, he adds.

“If you cut in the morning and you have a heavy crop and everything [weather-wise] is against you, you will have to leave the crop in the field to wilt for longer and pick it up the next day.”

Dr Davies adds that the golden rule is for farmers to wilt for “as short a time as possible, but no longer than 24 hours.”

“Consistency in the silage clamp is key to improving animal performance. One thing many farmers do is mow and pick up in the same order.”

He says this is wrong because it doesn’t take into account different field conditions.

Fields wilt in different ways – for example, depending on their orientation – so farmers should consider which ones wilt more quickly and pick up grass from these first.

He recommends carrying out DM tests on mown grass in the field to give an accurate guide of when to pick up: