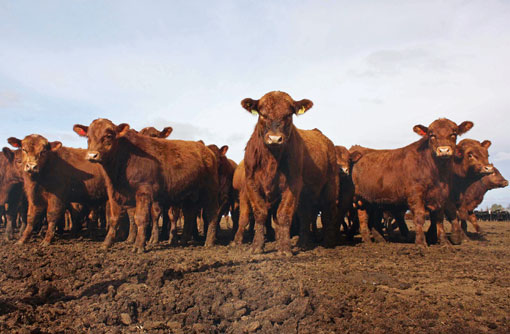 It’s no surprise that beef is big business in Argentina. Most ordinary people expect red meat at least twice if not three times a day. (Argentineans are the world’s second largest consumers of beef, at 55kg a year per capita – just behind Uruguay.)

And, while the socialist government fights to keep food prices low, the nation’s farmers are working hard to keep costs down and push for efficiency gains.

From top to toe, the country is almost 2,300 miles in length. That means that producers experience some wide-ranging variations in climate. Consequently no one production system suits all areas.

Breeding has been a key influence on upping productivity, with different worldwide genetics brought in to match Argentina’s vastly differing conditions.

With farms in the semi-tropical north and on the wind-swept plateaus of Patagonia’s Pampas region, the Werthein family know all too well the impact that breed selection can have on productivity.

“The traditional choice for Argentine beef producers has pretty much been Hereford or Angus,” explains Andres Werthein.

“The meat quality is good and their British hardiness suits our semi-temperate central regions.

“But with domestic and global consumption of beef on the up and more land being planted with highly profitable soya, we’ve had to shift production, particularly northwards.”


What that has meant is finding cattle capable of handling the hot, dry conditions of Argentina’s northernmost regions.

To do this the family has brought in Brahman genetics from India and has developed its own line of Angus and Hereford crossbreeds – Brangus and Braford.

“It has taken us a long time to get the perfect hybrid,” says Daniel Werthein.

“Brahmans obviously have that inherent hardiness to deal with harsh, tropical conditions but first crosses tend to take longer to finish and have a tendency towards a lean, slightly tougher meat.


Over some 30 years of using Indian genetics, the family has seen some interesting traits develop. By maintaining certain Brahman lines, the cattle retain the “twitch gene” – the ability to shudder their entire hide to shake off flies and ticks.

This simple trait means there is a much lower incidence of tick-related anaemia amongst crossbred animals, resulting in better growth rates in the heat of the north.

So what genetic tools are used for this monster-scale breeding enterprise?

The Wertheins have long been believers in making use of every available tool in improving genetics. For the last 80 years the family has been importing semen from all over the world and embryo transfer in the last three decades has been essential in making the most of the business’ best animals.

In 2003 a decision was taken to go one step further down that route and a small-scale trial was undertaken to assess the feasibility of cloning.

“We wanted to make the most of our champion cow genetics and cloning seemed like the obvious route,” explains Daniel.

“We took batches of three identical animals all born at the same time in the same season and placed them at different sites around the country.

“We found that these trios of “identical” siblings all turned out very differently – environmental factors seem to have a bigger effect than we’d expected.

“Although the DNA might be the same, the end result can be poles apart.”

However costly, the experiment was a useful exercise in focusing the management of the family’s various herds in different regions.

And, as an emergency procedure, cloning has proved itself on more than one occasion.

“We’ve had highly valuable, champion cows just drop down dead on us. Before, that would have meant losing those important genetics.

“But, if you’re quick enough to chop off an ear, live stem cells can be extracted, grown and might just make it through to becoming a live calf.”

While genetic markers are not yet used in the Werthein herds, all breeding animals are index-scored for traits such as:
• backfat thickness
• rib-eye size
• scrotal circumference
• daily liveweight gain
• maternal ability
• birth weights (used to assess suitability of bulls for use on heifers)

“But it will be market-driven. Consumers want better quality meat and greater traceability.

“If we can use these tools to improve productivity and provide more information about particular bloodlines then it’ll definitely be the way we go.”

At one of the family’s main finishing units some 400 miles (650km) south west of Buenos Aires, the performance of the business’ four major commercial lines are compared.

Pedigree red and black Angus, Hereford, Brangus and Braford are all kept in the same feedlot and rations tailored to suit the differing genetics.

While nearly all male animals are destined for the abattoir, the majority of females will be retained within the business to help bolster breeding numbers. Split into separate groups, their diet is similar and typically follows these lines:
• 50% maize silage (30% DM)
• 30% milled maize
• 19% sunflower or pelleted wheat
• 1% vitamins and minerals

“But the climate here also dictates our ration. It can be very dry and cold – conditions which tend to suit sorghum more than maize.

“We’re including more sorghum in the diet of younger animals – up to one year – because they are able to tolerate the higher levels of tannins that can cause joint issues in older cattle.”

In addition to the mainstream breeds, the Wertheins have invested in some ~250 individuals of Japanese Wagyu cattle.

These require some very different management. Nervous by nature, Mr Castro has discovered it is very important to keep these animals calm and to avoid them breaking into a run which can serve to damage the high levels of intra-muscular fat which makes the meat so different from anything else.

These Far Eastern immigrants require a very different menu too, with plenty of metabolisable energy on tap.

Their diet is pretty much 70% milled maize plus 30% pelleted soya with oat or soya straw ad-lib for fibre.

Killing weight is different too. While most Argentinean beef animals will be slaughtered at around the 400kg mark (liveweight, generally 18-20 months), the Wagyus are kept for a minimum of two years to get them up to the target weight of 800kg. There is typically a 20% premium for this fattier, more tender meat.


How is the management different for breeding animals?

While mainstream pedigrees and cross-breds are generally served at 15 months with three AI attempts and then a sweeper bull, service for the Wagyus generally occurs at between 20 and 24 months.

“We’ve found them to be incredibly fertile at that age,” says Mr Castro.

“Typically over 50% of heifers will take after their AI with pregnancy rates of 97% after the sweeper has been in.”

Conception rates are considerably more variable in the mainstream bloodlines.

“For example, last year pregnancy scores in our worst hit herds dropped to as low as 52% as a result of the drought.

“This year, in those same herds we’ve seen them rocket back up to 98% and long may it continue.”

A bit of history

The Werthein family arrived in Argentina from Russia in 1904 and over the last 100 years have built their business up from a general store to a mighty farming empire that now covers some 180,000ha (444,800acres), making the Werthein estate the third biggest landowner in the country.

At its peak some five years ago the business ran up to 55,000 head of cattle. However, following a government-imposed export cap in 2006 that limited beef values to around 1USD/kg (a move designed to keep domestic prices low and keep voters happy), like many of the country’s beef producers, the family was forced to downsize.

Numbers dropped to around 25,000 – far lower than was anticipated but exacerbated by a four year drought that left many farmers unable to feed and water their animals. (In total, the country lost in the region of 11 million head of cattle over that four year period).

In the last two years that situation has completely changed. The market has picked up (the Argentine beef price stands at around 7.7USD/kg) and now the emphasis is very much on increasing numbers once more.

While most bull-calves eventually make their way to the abattoir at 18-24 months (1-3% Are kept back for sale as breeding animals), all females are retained to grow the herd, with just 700 sold each year as breeding heifers.

“We are growing as fast as we can without buying more animals in,” explains Daniel Wethein.

“But we can’t invest too much – the unpredictability of government policy deters many investors from putting too much money into farming – we can only live for tomorrow.”

His caution is not without good reason. Recently, in an effort to keep domestic prices down, the Argentine socialist government has put bans in place on the export of different cereals and cuts of beef.

In addition, agricultural commodities such as soya and maize attract exports tariffs of up to 35%.

“It is madness to tax exports. The government is limiting the flow of money into the country – something we desperately need if our economy is to grow.”