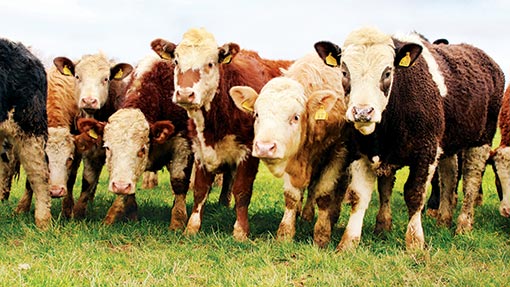 When Amy Gordon returned to the family suckler unit in 2011 she immediately set about overhauling the system to drive efficiencies and improve calf quality and outputs.

By addressing soil fertility, reseeding pasture, paddock grazing and improving genetics through artificial insemination, she has done just that.

Improvements in forage quality and how it is used means Amy and her father Glyn have been able to increase stocking rates on the same land and produce more calves at a heavier weight on less concentrate.

Their recognition of how better use of forage can help drive farm profitability ensured the Gordons secured their place as winners of the Most Improved category in this year’s Mole Valley Farmers Forage for Profit Awards.

Miss Gordon explains that when she returned to Riddle Farm in Loxhore, grassland management involved opening the gate and letting the then herd of 70 Simmental-cross British Friesian cows run across the farm.

“The cows were out at grass from late April until October/November and calved over 24 weeks starting in mid-March. One of the first things I did was close the gates in the fields and start artificially inseminating to help tighten the calving block,” she explains.

Cows had been traditionally bred to British Blonde bulls, with calves sold through the autumn calf markets. However, with the aim of improving calf quality and weight gains, Miss Gordon decided to introduce quality Charolais genetics through artificial insemination.

“We now look at EBVs and select bulls in the top 10% for calving ease, terminal index and 200-day weight. It also made sense to condense the calving period as calves born at the start of the block will be worth more when you sell them in October/November,” she says.

Through observing cattle, synchronising and culling where necessary, the herd now calves in an 11-week block.

On the maternal side, Miss Gordon has also started artificially inseminating cows and heifers to Hereford. By doing so she has been able to produce a smaller cow, capable of making the most of grass at the shoulders of the year.

“Average cow weight has now been reduced from 700kg to 550kg which means we have increased cow numbers to 106. These smaller animals will eat less off the same area and produce quality calves,” Miss Gordon explains.

Increased stocking rates have also been made possible by boosting grassland performance through careful management. As soon as Miss Gordon started shutting gates between fields, the potential to be had from grazed grass was clear.

“In the first year we were grazing for longer in the season, cows were holding condition better and we were selling calves at 280kg, rather than 250kg.”

As a result, the decision was made to improve grazing management further and move to a 24-hour paddock grazing system. Grass is now monitored weekly using a grass plate meter to create a grazing wedge.

Stock is introduced to paddocks at about 2,600kg DM/ha and grazed down to 1,600kgDM/ha, with the aim to meet intakes of 15kg DM a cow a day in grazed grass across the grazing season. Time in each paddock and its size is determined by demand, based on the weight of stock.

“Demand for grazing increases throughout the year as the calves get older and their intake increases, so grazing area has to increase to accommodate this,” explains Miss Gordon.

Miss Gordon explains that at the start of the season the 93ha farm will be split 50:50, with half grazed and half cut for silage in May. This silage ground will then enter the grazing platform.

“When grass gets ahead we will also cut it for big baled silage. We will then use this to meet increased calf demand in the autumn. The increase in silage quality has also been dramatic and we now achieve 70 D value and 11ME,” she says.

“We also analyse fresh grass samples through the season. We have found if you manage grass correctly, quality remains similar throughout the year at about 73 D value, 11ME and 18% protein. With grass that good you don’t need expensive concentrate,” she says.

In fact, by maintaining grass quality through the year, the Gordons have been able to extend the grazing season and reduce concentrate use by 8.3kg a calf, saving 0.8t across 100 calves or £208.

Replacement heifers are now grazed from late January instead of mid-March, achieving an average saving of £840 in silage and £270 in straw across 20 yearlings.

Calf daily liveweight gains have also improved significantly. Prior to the changes, calves averaged 0.9kg a day. When fields began to be shut up this increased to 1.1kg/day, increasing to the current 1.25kg a day thanks to paddock grazing and improved breeding. Last year, weaning weights of the Charolais calves averaged 314kg.

As a result, every year a portion of the farm has been limed and P and K levels have been addressed through targeted application.

“We have been building P and K levels by moving to an autumn application, with slurry and nitrogen applied in the spring. We like to do regular soil sampling and top up with P and K where it’s needed,” explains Miss Gordon.

A reseeding programme has also been introduced to improve overall pasture quality. This has involved selecting high-sugar, perennial ryegrass varieties that will grow at the shoulders of the year to help further extend grazing.

“These new leys will have better nutrient uptake and be more palatable, which will help produce better milk yields and calf growth rates. We think if we continue to improve grassland management and genetics there is even greater potential to increase numbers, weight gains and weaning weights,” says Miss Gordon.