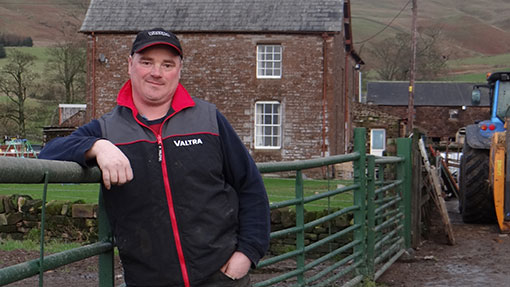 Finishing beef to a high standard from largely home-grown forage is not something that would be traditionally associated with a farm rising from 750ft to 2,000ft above sea-level.

Add to that a customary 60in of rainfall and a chilling wind known locally as the “helm” and this seems even less likely to be a place for high-quality forage production.

But Thomas Toppin from Galehall Farm, Melmerby, Cumbria, has overcome nature’s obstacles and is successfully fattening around 400 cattle a year on largely home-grown forage from his traditional Eden Valley farm.

The hurdles he has had to deal with on his 465ha have not always been beset by nature.

Like most beef finishers in the area, the diet traditionally fed was based largely on rolled barley as the family sought to fatten the animals as quickly as they could.

They subsequently switched to crimping the barley which they found to be more cost-effective and convenient, but they were later faced with the loss of some of their best cereal land as short-term rental ground was withdrawn.

“This meant we had to find a home-grown alternative to the crimped barley,” says Mr Toppin, who knew that buying in bulk feed would not be cost-effective.

He found the solution by increasing the quality of his grass silage, adding some wholecrop barley and bolstering the ration’s overall energy by adding processed bread and biscuits.

“Silage quality became critical when we lost the cereal ground,” says Mr Toppin, who cuts and forages the grass up to an altitude of 850ft.

And moving from a two-cut system to only one-cut two years ago added to the importance of achieving good results from this single cut.

“The grass silage is now harvested in late June or early July and comes in at a dry matter of around 28-30%,” he says. “But our biggest challenge here is the weather, as the rain comes in from the lakes, and for the last few years we’ve had to pick up the grass right away with no wilt at all.”

Anxious the difficult conditions should not compromise quality and keen for the single cut to retain the maximum feed value in the clamp, Mr Toppin consulted Michael Carpenter from forage preservation specialists Kelvin Cave Ltd and subsequently chose to try an inoculant.

“This is one of several silage additives we considered and was chosen by Mr Toppin because of its ability to rapidly reduce pH in situations where sugar levels can be low, while at the same time, inhibiting the growth of yeasts and moulds,” says Mr Carpenter.

“These spoilage organisms can be a problem when dry matter is high, which was sometimes the case with this later cut crop.”

Mr Toppin confirms one of the problems he sought to address was the “spots of white mould”, which tended to occur across the face of the higher dry matter silage.

“The inoculant has done away with the mould completely,” he says. “And although the silage quality wasn’t bad before, it’s definitely far better now.”

The silage analysis corroborates his view, with metabolisable energy (ME) routinely higher at 11-11.5MJ/kg DM, compared with around 10MJ/kg DM before the inoculant was used. And wholecrop barley is also now preserved with the same product, forming an important part of the beef ration.

Heifers and steers are grown somewhat slower, finishing at around 600kg by 20-22 months on a ration based on ad lib grass silage, 2kg bread and the same quantities of biscuits, minerals and NPN.

“Margins are tight when finishing beef under any system, but the loss of our combining land has actually forced us into a more profitable system,” says Mr Toppin.

“It certainly would have been hard to make the beef pay using rolled barley over the past few years, but using high-quality wholecrop and silage has made this system as cost-effective as any we’ve found.”