The first batch of calves arrived in September 2016 and left the 300-head unit this April.

The initial average growth rate across the finishing period was 1.1-1.2kg/day – a figure that has accelerated to an average 1.5kg/day since a pressurised ventilation system was installed.

Mr Bowley estimates the fans have shaved more than 90 days off the finishing time, which has declined from an average 375 days to just 281 days.

See also: Beef – should I stay or should I go?

This has reduced the requirement for bought-in feed by an estimated 630kg/head, equating to a saving of just over £100.

The management system is overseen by Dunbia, which is replicating the project on several other farms.

The company supplies Mr Bowley with steer and heifer calves of mixed breeding, mainly sourced from dairy herds, and takes back the finished animals. These must be a minimum of 12 months and one day old, as younger cattle would be officially classified as veal.

How the Dunbia agreement works

The finishers receive a pre-agreed payment, which is linked to weight, quality and market price, as well as the cost of production.

The calves arrive at approximately four months old weighing 130kg, with steers taken to 570-580kg and heifers to roughly 540kg.

“In fact, some of the cattle are finishing earlier than 366 days and I have to wait for the minimum period to be reached before I can send them in,” admits Mr Bowley. 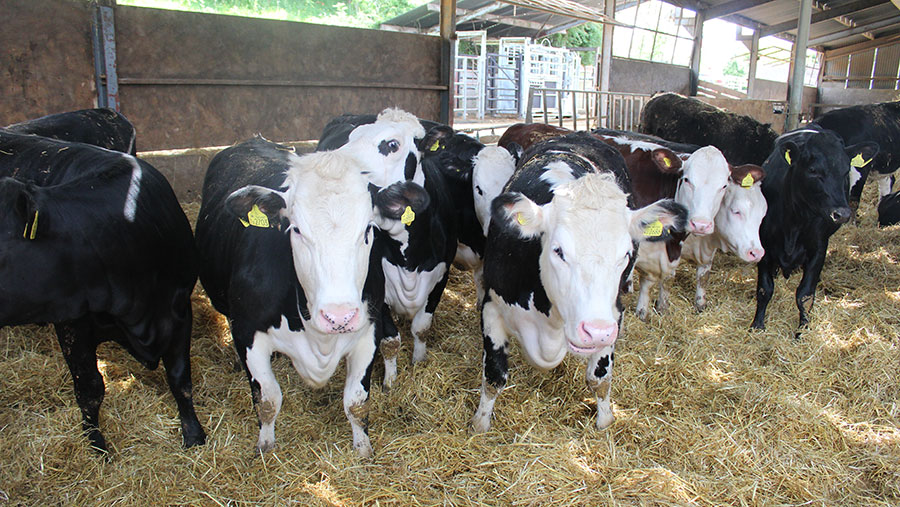 Bedded on wheat straw, the cattle are fed a total mixed ration with home-grown rolled barley as the main ingredient, plus maize distillers’ grains, soya bean meal, soya oil and protected fat. The herd also has access to barley straw.

“Feed costs on this system are comparatively expensive at about £450/head. Therefore a high throughput is needed in order to produce a reasonable gross margin,” says Mr Bowley.

“It is a good way of utilising the buildings and I have set it up so that minimal labour is required. The total mixed ration allows for mechanical feeding and there is an automated straw bedding machine, so it only takes one man two hours a day to see to the cattle.”

The high input system pushes cattle growth limits and it is important to guard against metabolic disorders, warns Mr Bowley.

The rations also contain Econbeef, a supplementary mineral and vitamin mix with antacids that is imported from Spain. This product costs an average £170/tonne and has been designed to reduce the risk of acidosis in high cereal cattle diets.

Mr Bowley is currently in the early stages of trying to establish whether specific sires have a genetic hypersensitivity to metabolic disorders to increase profitability.

While this is still in the early stages, he has already successfully collected growth rate and abattoir data to allow him to compare performance across breeds (see Table 1 for more information).

“Performance to date has mostly been as expected, with the black and whites taking longer to finish and some of the native breeds producing better quality meat,” he says.

“At one point, I counted almost 20 different breeds and crossbreeds in the unit.

“The Hereford crosses have emerged as the clear leaders to date. They only achieved average growth rates, but none have suffered any health problems.

“They have also produced the highest killing out percentages and have graded well,” explains Mr Bowley.

“I will need to see more results before I make a final decision on whether the system has the profitability potential to beat more traditional methods of cattle finishing,” he says.

Mr Bowley, a qualified engineer who returned to the family farming business in 2012, initially believed the cattle housing was well ventilated.

However, several animals had to be treated for pneumonia in the autumn and after some research, he purchased four pressurised fan systems for the two cattle buildings in December 2016.

These have produced results beyond expectations, with not a single case of pneumonia recorded since their installation.

They were sourced from a specialist supplier of mushroom farming equipment and have been adapted by Mr Bowley, using his engineering expertise.

The fans blow air into a polythene tube, which runs horizontally across the length of the building. Holes have been punched into the tube at 1m intervals and positioned at 5 o’clock and 7 o’clock angles. 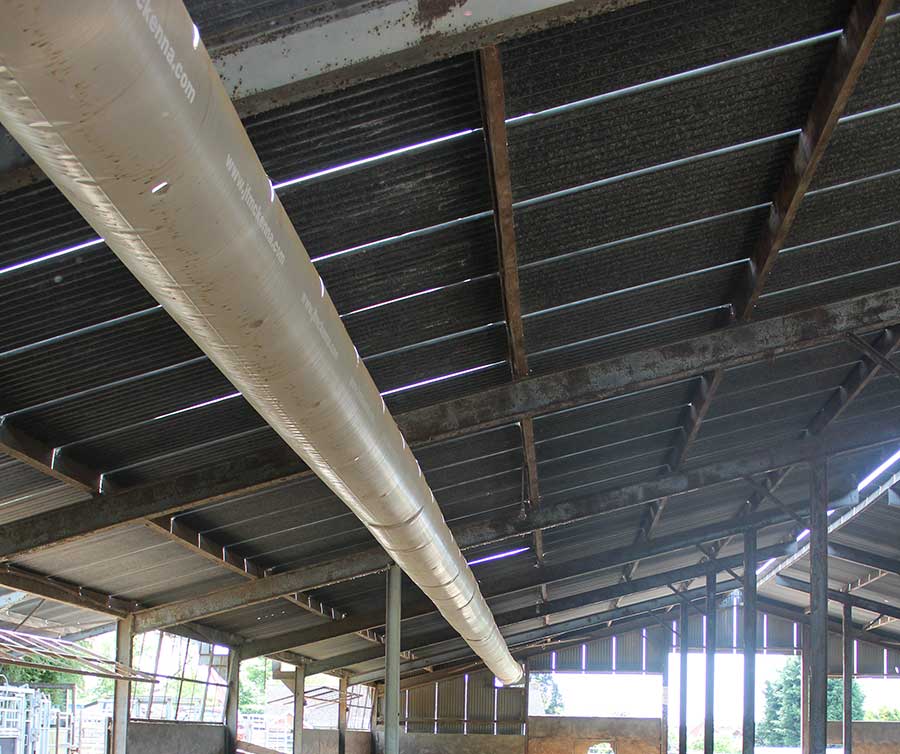 This arrangement pushes air downwards at an angle, which causes stale air to rise and subsequently exit through the roof vent.

If the fans were used without the tubing, they would simply blow air at a point above the animals and would not fully solve the problem, he says.

The fans had an immediate effect. Although Mr Bowley has continued with a vaccination programme because young calves are highly vulnerable.

“In a typical farm building, cattle can be heard coughing every now and then and ours were no exception, but there has been no coughing since the installation.

“The fans also keep dust to a minimum during bedding up and this provides a better working environment for the operator,” he adds.

A power meter has been added to measure output and the fans are set to maximum speed at minimum power. Mr Bowley has rejected the idea of an automated system.

“Automated fans would cut off when the air reached a certain temperature and humidity level, but I wanted the environment to be constantly cooled and refreshed. I experimented by turning down the setting from 8 to 6 and within less than an hour, the environment was 1.5C warmer.

“The general temperature of the building is slightly reduced by the addition of the fans, but I think the heating effect of the barley diet more than makes up for this factor.

“In general, the temperature is 0.2C higher and at the same humidity level, compared with the ambient figure.

“As the buildings empty, savings can be made by switching off half of the fans. Some producers clip their cattle to keep them cool, but I think this is a more practical solution.”