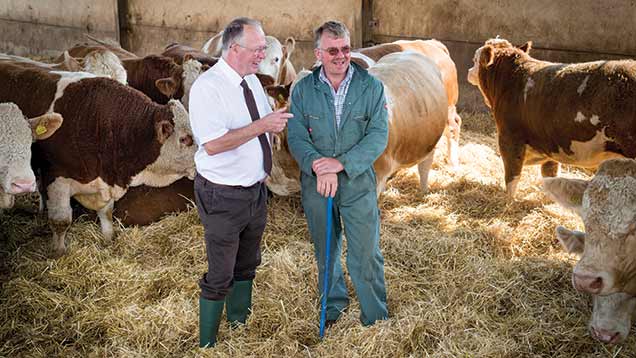 Farmers Weekly has teamed up with Harper Adams University for a new Beef Focus Farm series.

During the next 12 months we will be following suckler beef producer Ian Willison, Warsop Vale, Nottinghamshire, to find out how he achieves and maintains performance in the top 1%.

Beef farmers need to focus on improving technical efficiency and reduce fixed costs if they are to stay in business, according to a leading cattle expert.

The most recent AHDB Beef and Lamb Stocktake report reveals even average and top-third breeder/finishing sucker producers are reporting a loss of £304 and £3 a cow, respectively, when fixed and non-cash costs are deducted.

The report also shows for the average producer the output a cow is £1,032, but variable costs are £485 and fixed costs are £851 a cow – the latter including £415 for labour (paid and unpaid) and rent (imputed and actual).

“This is not sustainable,” says Mr Marsh. “Producers need to focus on improving technical efficiency if they are to avoid using their BPS money to continue in beef production. A decent profit can be made from suckled calf production.

“Why overspend on machinery that just depreciates, rusts and burns fuel? Spend money on the best possible genetics with high-index bulls. They will always give an excellent return on investment,” he adds.

The concept of the Farmers Weekly/Harper Adams Beef Focus Farm is to identify top 1% beef producers whose physical performance data are independently monitored, reported and demonstrated.

Mr Marsh, a suckler producer within the top 1%, would be operating an easy-care suckler system, which he says involves:

One such producer is Ian Willison, who farms at Williamswood Farm, Warsop Vale, Nottinghamshire. He runs a herd of 75 autumn-calving Simmental cross British Blue sucklers.

Cows are put to Simmental bulls, with top 1-10% terminal indexes. He uses AI and home-bred sweeper bulls, with a focus on calving ease and growth EBVs.

Mr Willison used AI when he milked cows 25 years ago. He says he likes it, as it gives him access to a choice of bulls and allows him to pick genetics to suit the cows.

He aims for a calving rate of 101-102%, with the Simmental breed more prone to twinning.

Because Mr Willison AI’s cows, it forces him to use EBV figures.

“EBVs are an indication of what a bull’s offspring is likely to do for you – you can’t tell that by just looking at an animal.

“Calving ease is paramount and we would be looking for anything with at least a top 10% index for calving ease direct and milk.

“We also look for a positive on daughters and scrotal size. It is important to judge the cows as well as the bull, so we have a strict culling-out policy on cows that don’t perform,” he adds.

The bull calves are intensively finished on maize silage and blend at 13-15 months old and heifer calves not retained for breeding are sold at a premium direct to pedigree breeders as ET recipients.

Their high health status aids this, as they are accredited for BVD, IBR and Johne’s. Herd replacements are selected on their ability to “calve and conceive”.

Cow and calf performance is independently monitored by Mr Marsh, with a particular focus on the evaluation of the progeny of two AI Simmental sires.

The 2014 calf crop was predominantly sired by two Simmental bulls. Omorga Volvo is a top 5% terminal sire (TI+94) and Starline Decision (TI+60) is regarded as a top maternal sire, but with an index that is only in the top 60% for the breed.

Dirnanean Bradley was also used for the 2015 calf crop and is a top 1% bull with a TI of +115, making him a curve-bender bull with positive calving ease figures and massive growth.

He was also overall Simmental champion at the Highland Show in 2014, proving you can have a top-index bull that is pleasing to the breeder’s eye.

In future articles we will be delving into more detail regarding the calving figures from the 2014 and 2015 calf crop.

Hybrid vigour is particularly important in the cow as this boosts lowly heritable traits such as fertility and health.

“The Simmental provides growth, bone structure and milk, while the Blue brings conformation,” he says.

At the moment he isn’t looking to introduce a third breed, even though Mr Willison may have to maintain hybrid vigour for the replacements in the future.

“At the moment I have no need to add a third breed. If I wanted all calves terminal then I could see the benefit in adding another breed into the mix,” he says.

Cow weights are not too extreme, which is helped by calving replacement heifers at 21-24 months old. Average cow liveweight pre-weaning in April this year was 637kg.

When it comes to time of year for calving, Mr Willison goes against convention by calving heifers from mid-July and cows mid-August through to October.

He picked late summer/early autumn calving as it fits with his grass growth and gives him options whether to calve inside or outdoors.

It also means cow nutrition can be fully controlled during the critical bulling period, as the cows are indoors from the end of October.

“Because we are using AI, autumn calving makes it easier, as the cows are already inside during the bulling period,” he says.

Another benefit of autumn calving is that steer and heifer calves can easily be finished by 18-20 months old out of yards rather than 24-28 months, which is typical with most spring-born calves, although Mr Willison finishes his bull calves at 13-15 months old.

Mr Marsh adds that autumn calving can be just as cost-effective as spring calving.

“In recent years we have experienced summers with either drought or monsoon conditions and this can affect fertility in a spring-calving herd.”

“In addition, it is often stated feed costs a cow are lower for a spring herd, since the cow is dry for the majority of the winter.

“However, I would argue that this is not correct in most cases. The majority of spring herds keep their calves for at least a year, so the feed that 6- to 12-month-old spring-born calves require equates to the extra silage – and maybe some concentrates – required for an autumn-calving herd.”

Once heifers and cows are housed inside in October they are gradually introduced to a winter ration of a home-grown 50:50 grass and high-energy maize silage ration, with no additional concentrates, keeping cow winter feed costs to a minimum.

When inside cows and heifers are served, with heifers AI’d over a three-week period and cows over six weeks. A sweeper bull is then used to pick up any not in calf. Anything not in calf is fattened.

Cows are not synchronised before AI’ing, and Mr Willison is able to get 70-75% in calf to AI in the six-week period, with 70% of heifers in the three-week period.

The aim is to keep cows and heifers at a body condition score of 2.5 throughout the year. Heifers are brought indoors four weeks before they are due to calve in July and fed solely on ad-lib hay.

“I don’t want to be hard on heifers, but I also don’t want to feed them silage, which is why I feed hay. I also bring them in a month before calving so they can get used to their surroundings,” he adds.

Cows are offered 5-6kg each of straw a day at grass four weeks before calving to help control body condition. When they are brought inside to calve they are offered hay and plain haylage.

Cows and heifers are also bolused twice a year with selenium, copper, cobalt and iodine, which Mr Willison says has had a massive influence on calving times.

“When we blood-sampled cows we found they had a lack of selenium and copper. Cows are now dilating much better and calves are stronger – last year we only lost one calf,” he says.

Cows calve down in yards of 10-15 and are left unless help is needed. He says only one in 10 cows would need assistance.

Calves are observed at calving to make sure they have adequate colostrum intake. An emergency supply is kept in the fridge, with intervention only when absolutely needed.

Mr Marsh adds: “I can’t stress the importance enough of an early and adequate intake of colostrum – it is the elixir of life.”

After each batch of calves the yards are cleaned out, allowing cows to calve in a clean environment and avoiding infections such as naval ill.

A day after calving calves are disbudded, tagged and split into two groups – cow/heifers with bull calves and cows/heifers with heifer calves – to allow creep feed to be tailored.

They stay in these groups until weaning. Bull calves are weaned at eight months old (April) and heifers at 10 months (June).

Post-calving heifers and cows are put back out to grass, before being brought in again with their youngstock in October.

Bull calves are offered creep when out in the field and heifer calves are fed 1kg of rearing nuts until Christmas, before going onto maize and grass silage.

Bull calves average 1.41kg daily liveweight gain from birth until weaning (minus birthweight) and heifers 1.10kg, with the latter only being fed 47kg of creep.

Mr Willison says he is looking for a level growth curve and invests in concentrates during the first few months to get early growth.

“The younger the animal, the more efficient it is,” he says.