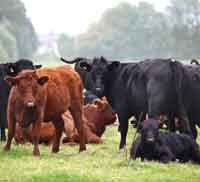 The beef industry will find itself in the same position as the dairy sector unless producers receive a farmgate price which delivers a fair income and investment.

That was the stark warning to emerge from the NFU’s livestock break out session at the NFU Conference on Tuesday afternoon (15 Feb) which was attended by 200 farmers.

“If beef farmers do not see a better price, we will see them go out of business and you won’t get them back,” said NFU livestock board chairman Alistair Mackintosh

The point was reinforced from the floor that unless the UK beef industry developed export markets it would continue to be at the mercy of the price retailers would pay – and in the same impossible situation that dairy farmers currently face.

“Even the single farm payment is not enough to shore up declines in margins, said Mr Mackintosh. “Beef farmers are eating into their cash savings to cover increasing costs.”

On his own in Cumbrian farm fertiliser costs have doubled, feed was up 40% and fuel by 30%. And it was not just the `three f’s’ that were going up – vet bills and other inputs and services were increasing too, he added.

The session was also heavily dominated by discussions about possibility of meat inspection charges being passed back to the industry following a Food Standards Agency consultation.

Welsh farmer Ed Rees challenged the Food Standards Agency chairman Lord Rooker on the bureaucracy of the system and the impact on costs to him.

“I use a medium sized abattoir which employs sixteen people; my hygiene charges are currently £4.60 but after the meat and hygiene inspection `transfer of charges’ this would increase to £20.73,” he said.