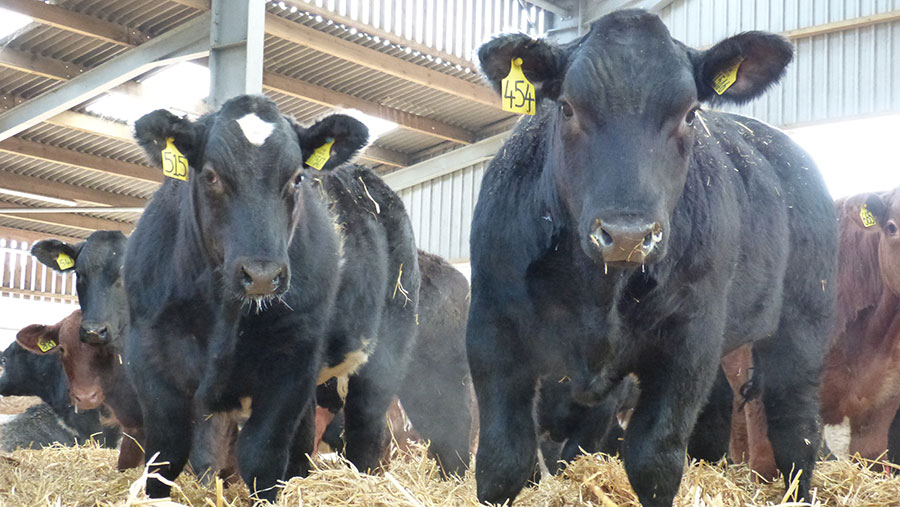 Vaccinations, fresh air and creep feeding are central to a Wigan suckler herd’s successes at store sales, where stylish commercial cattle are making £1,200-£2,000 or more at 10 months old.

Minimising stress on youngstock at birth, turnout, housing and weaning is pivotal at Landgate Farm, Bryn, where Stuart and Debbie Baldwin use a “belt and braces” approach to prevent respiratory illness in their calves.

The approach is rewarding the Baldwins with growth rates of 1.1kg/day in their Limousin-cross blue calves from their mostly pedigree Limousin herd.

This is how they can justify still being in beef while balancing a growing contracting, haulage and waste management business as well as 1,200ha of arable land. 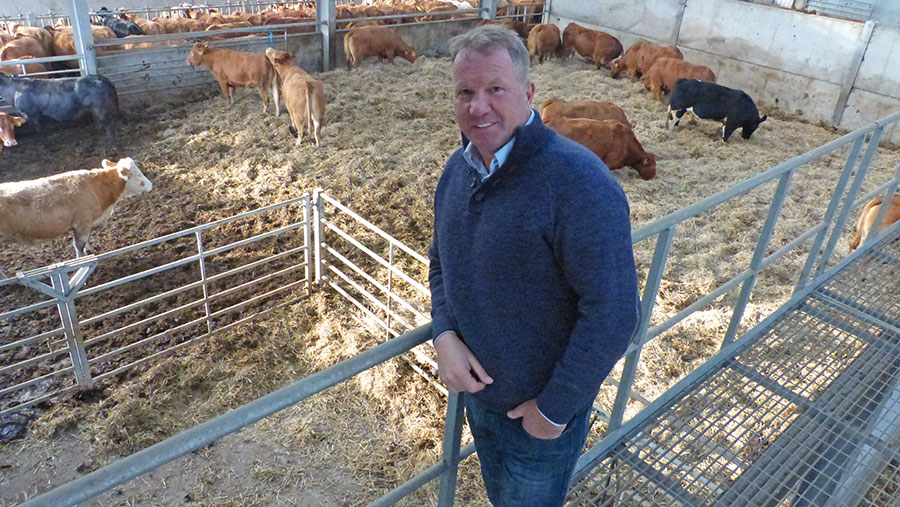 Fast growth means weaning at 150 days at 175-200kg, which is helped by colostrum boosters, creep feeding from birth, replenishing fresh straw daily and cold-air fans in the centre of a £300,000 cattle shed, where spring calves are born and later rehoused and weaned.

“I believe the suckler man will be wanted and while people are leaving suckler beef I am going into it in a bigger way,” explains Mr Baldwin, who has recently expanded from 80 cows to 250 cows.

Long-term investments include the new cattle shed, which doubles up as a grain store in summer, and £200,000 on female breeding stock.

“I’ve used colostrum boosters for years. One year we didn’t about eight years ago and we were straight back to tubing calves and seeing scours.”

A bespoke shed was designed to minimise pneumonia through a long wintering period (October 15 to May 1) and built in 2013.

“We’re often a dry farm in the summer but the reclaimed opencast land, which is where the pasture is, tends to get wet very quickly in autumn,” admits Mr Baldwin.

“Last year we had a really mild and wet autumn for housing and we had three cases of pneumonia.”

This prompted Mr Baldwin to call on the services of building and health expert Jamie Robertson, Livestock Management Solutions.

The Baldwin’s shed passed the test of Mr Robertson, who is seeing more and more multipurpose new builds for cattle, which he says must be managed well to avoid respiratory problems.

He stresses is an inherent challenge in large sheds built to also house machinery and grain as they can contain such large volumes of air.

“This challenges the stack effect as hot air has further to rise,” explains Mr Robertson.

“Wide buildings are also a challenge as proper ventilation in the middle of the building is difficult to achieve.”

Cows calve down inside in an autumn and spring-calving (two thirds of the herd) block each 10-weeks long.

A 16 crude protein barley and urea-based concentrate and straw is offered ad-lib from birth – typically taken at one week old – until the day they leave the farm.

At two-weeks old calves are dehorned and castrated to minimise any growth check outside.

Backs of spring-born calves are clipped in October at housing, which farm office manager Sarah Grundy says is done “as a matter of course”. 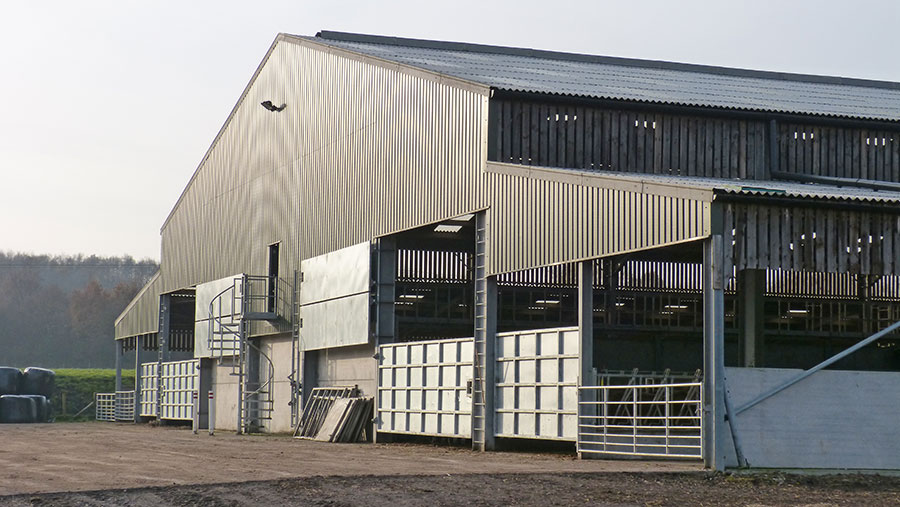 “We think the animals feel better for it and its also how they are presented before sale day.”

Weaning at five months old requires high-performance calves and dams, with a no-nonsense approach to breeding for fertile, milky cows with good feet.

“We generally fatten cows if they have been scanned empty more than once,” says Ms Grundy, with empty cows moved on to the next calving pattern.

“Prolapses are uncommon but are culls.

Milk is very important and flighty cows after calving could be culled.”

Two cuts of silage are taken and chopped to 12cm.

This is then wrapped and fed to cows, which is their only feed.

“This isn’t directly related to the Blue sires,” says Ms Grundy, who monitors calving through the team via a WhatsApp group.

“They are muscular calves and some need ropes but there has only been one caesarean recently and that was three years ago.”

Cows are bred to be moderate sized (650kg) for most of their life, although culls cows finish on silage, barley and blend to be more than 800kg. 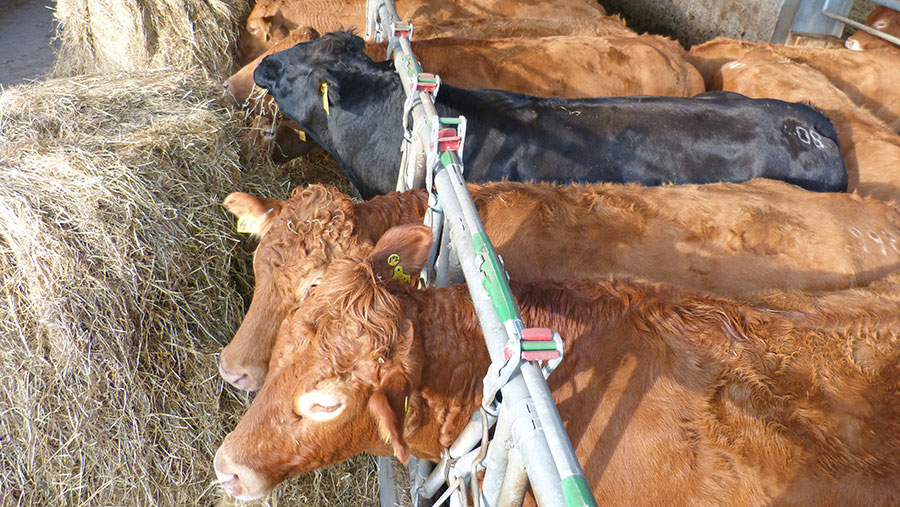 A key piece of the jigsaw has been heifers originally bought in from Eric and Elaine Norman at Carlisle.

Records show these have been the best breeding cows and produced the largest revenue for stores sold.

The farm has traditionally retained 15 heifers a year from Norman Limousin genetics, with Norman Excel used extensively as an all-round breeder for replacements.

A herd health and vaccination plan was draw up with vet Rob Howe of Lambert Leonard and May with Mr Baldwin firmly believing “prevention is better than cure”.

He recommends vaccinating youngstock and cows as any pneumonia in neonatal calves is best prevented to avoid secondary flare-ups later at housing and other times.

Mr Baldwin opts for two infectious bovine rhinotracheitis (IBR) vaccines aimed at reducing the infection pressure in the cow herd which could be activated during the stress of calving.

“Even if only one is used the principle of vaccinating the cows to protect the calves still applies,” explains Mr Howe.

Colostrum boosters are seen as a worthwhile investment and work as vaccinations to boost colostral antibodies against three main scour causers.

“This boosts the immune response in the cow prior to calving for e coli K99, rotavirus and corona virus,” adds Mr Howe.

“The philosophy is to tip the balance in favour of the calf and try and reduce the risks of respiratory issues elsewhere on the farm.

“Therefore, we give two IBR vaccines to reduce any challenge from the cows at calving.

“We also recommended Stuart administers the first dose of Rispoval Intransal 4 four weeks pre-housing to the spring calves and a second one at housing to minimise the impact of stress of housing and weaning on the vaccine and achieve cover in time for the risk period to improve efficacy.”

This elevates antibodies/immunoglobulins in colostrum to minimise three big causes of calf scour and at £9-£10 a cow a year means an investment of £2,500 across the 250-cow herd.

“One good heifer can pay for that cost and it could save six calves – it’s a worthwhile investment,” reasons Mr Baldwin.

For practicality, herd health work is restricted mainly to turnout and housing.

At two-weeks-old calves are castrated and dehorned, with a meloxicam anaesthetic used to minimise stress and subsequent loss of appetite and poor growth rates.

Stores, show potential calves and commercial breeding heifers are sold at a special sale at Newark and in three or four batches of 20 at Skipton in the new year.

“Stuart’s cattle have built up quite a following,” explains Newark auctioneer Paul Gentry, who will sell about 130 head of Baldwin stores in the spring (March 25).

“They are uniform, really well-muscled and grow well.

“Some are shown through the summer and the pick of the heifers make over £2,000 at eight or nine months old as commercial breeding cattle to be run through the summer on grass and then often bred back to a Limousin bull – they are also renowned for being exceptionally quiet.”