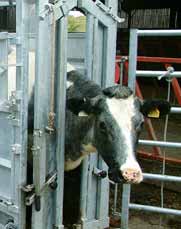 A mobile handling system is like an extra pair of hands on one Northumbrian suckler unit, as Simon Wragg reports

Paying £8000 for a mobile cattle handling system may seem expensive, but for beef farmer Kevin Sparke the investment is more than paying off. It may be a large amount of money to fork up, but Mr Sparke says he wouldn’t be without it.

“It sounds like a lot of money, but I’d sooner have money invested in that bit of kit than pay someone to stand and help us run cattle through our old handling system,” he says.

The mobile race and crush has been on farm for little over a year, during which time it has effectively halved the handling time spent running the 190-head suckler herd through a routine four-year bovine TB test as well as making easy work when drenching, vaccinating or clipping stock.

“We got it because our old fixed handling race was in the wrong place; we had to take cattle to it,” he explains. “It was put in when some of the older buildings were erected, but since we’ve put up new buildings further away, it’s a job to keep moving cattle backwards and forwards.”

Sucklers on the 390ha (960 acre) tenanted upland unit at Little Swinburne, Northumberland, are put through the mobile handling system three times a year. In the autumn, all stock are treated for fluke, worms, Lepto and BVD.

“We vaccinate for bluetongue in February. And six weeks before calving, all cows have a trace mineral bolus and scour prevention,” he explains.

But the beauty of a mobile system is the flexibility in where you can put it, says Mr Sparke. “This unit has a drawbar on the front of the crush and the hurdles are stacked on the sides, so moving it is easy.

“It can be unhitched and set up in 10 minutes. When it’s hot we have it on the yard to help keep cattle calm, and when it rains, we move it indoors, which makes life for staff more comfortable.”

That’s important as handling stock is a typically family-run affair at Little Swinburne. Mr Sparke’s parents, Colin and Pat, and wife Sarah are often called on to help out during busy times. “But when I’m on my own I can handle stock safely, and that’s what matters,” he says.


Key to any handling system is the crush. With yearling stores clipped out in preparation for market and/or housing, the single-action neck yoke can handle weanlings through to mature cows without adjustment.

“The fact I can open up the sides of the crush to access stock without any restricting steelwork is also a bonus,” says Mr Sparke.

Safety is just as important as flexibility. “Some may think £8000 is a lot of money for one piece of kit, but it is probably the most used item on the farm. And it’s certainly cheaper than putting down concrete and fixing another permanent raceway. We lent the mobile handling system to a neighbour for a routine TB test and he and the vet were impressed because it makes life so much easier,” he adds.

Throughput is also impressive. Little Swinburne’s old, fixed, raceway could handle 50 cows/hr during testing, but the mobile handling system almost doubles that at 90 cows/hr. “I can’t praise it enough.”

With two sliding dividing gates ahead of the crush, several cattle can be moved up in readiness. Sheeted sides encourage animals to move forward, Mr Sparke adds, which is probably the single most impressive part of the handling system’s design. “It’s all about flow. If cattle can’t be distracted, they keep moving and that helps work rate.”

After seeing a prototype at the Highland Show in 2008, the Sparkes were soon taking delivery of the mobile system. “A good handling system reduces stress on staff and stock. We realised since we expanded that the old raceway was in the wrong place and the weakest link in the chain.

“The flexibility of a mobile handling system makes the investment worth it. We can bring it to the cows instead of having to move stock around and across yards. I’d rather have money invested in the unit than paying staff; it’s like an extra pair of hands really,” he says.