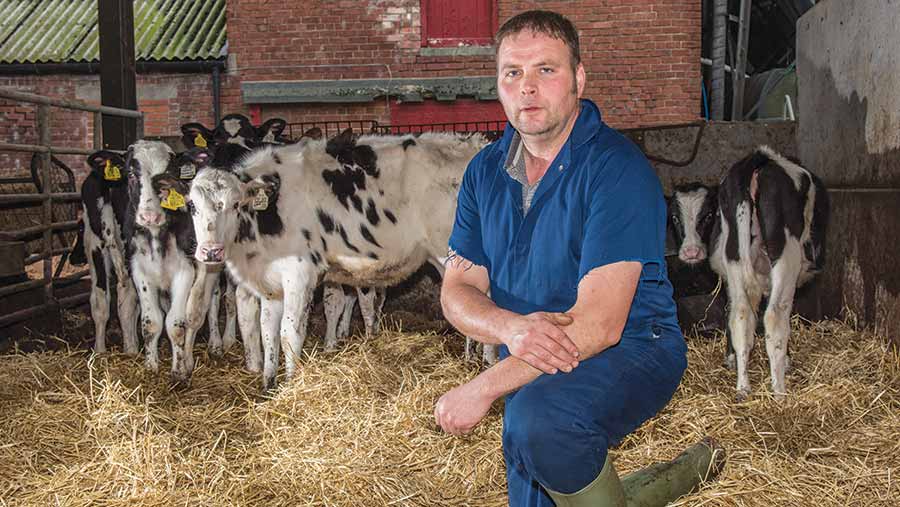 Cheshire farmer Ian McGrath has spent nine years under TB restriction and has lost 130 cows to the disease – a figure he knows will continue to increase.

TB takes at least 10% of his income every year, regularly claims his best and most productive cows and deprives the business of virtually any money earned from calf sales. However, he’s determined in his fight to combat the effects of TB on his business and has developed a range of management strategies to cope with it.

Mr McGrath says: “Complacency is TB’s biggest ally. No dairy farmer should assume it won’t happen to them.

“After our latest test we’re currently in the rare situation of being clear of TB, but I can almost guarantee that we will get more reactors in six months’ time when we retest – even though we do everything we can to control reinfection.

“That doesn’t mean to say cattle farmers who feel TB doesn’t present any immediate threat to their herd should let their guard down. Far from it.

“Every dairy farmer should undertake a TB risk assessment of their business,” he says.

Mr McGrath, who runs a herd of 200 head of pedigree Holsteins at Grange Farm, Over Peover, Knutsford, was first hit by TB in 2002 and at one stage was under restriction for two years.

He now manages his business based on the fact he expects to get TB, even though he may have brief periods of being clear.

For example, he now serves few cows to British Blue because he says this type of calf under restrictions is not worth very much.

“Sold into an AFU [assured finishing unit] means I’d lose about 40% of the value of these calves so now virtually everything is put to the Holstein – at least that way I have heifer calves to replace TB losses.”

The business no longer considers beef-cross calf sales as a source of income. “If you’re forced to rear beef-cross calves in facilities that aren’t designed for them, the whole system is compromised. So if you lose one dairy heifer calf because you’ve reared five bull calves, the value of that heifer calf has to be spread over all the bull calves,” says Mr McGrath.

He has also badger-proofed some areas of the farm, but admits it has not been easy.

“We have a high-yielding herd averaging 10,000 litres and so the cows have access to the buildings all-year-round.

“Although it’s impossible to give buildings total protection from badgers – despite what Defra thinks – there are things that can be done.”

Key locations on the farm that have seen the main efforts to prevent badger access have included the youngstock area, where calves are fed ad-lib pellets and so present an attractive feed source.

“We bought a large quantity of conveyor belts and fixed strips of them to the bottoms of doors in the youngstock buildings. The doors can be easily opened and closed but the badgers can’t slip under the gap.

“Protecting silage clamps is a nightmare but we’ve set-up a two-strand electric wire running in front of our maize silage. The height is critical and on advice we have it placed at the height of a mobile phone from the ground while the second strand is the same distance apart.”

Mr McGrath says badgers won’t go over an obstacle so any deterrent has to be placed at their level.

“We take maize silage out twice a day and keep the fence live for the rest of the time. We can’t keep any feed in open stores so everything is kept in upright bins. If a farm has a feed source and badgers are in the area near the farm, those badgers will find the feed if it’s not protected.

“And any farm that has nose-to-nose contact with a neighbour’s cattle needs to double-fence boundaries with an electric fence two-metres from the boundary,“ he adds.

Where badger populations are living close by, he knows it’s impossible to totally prevent access to farm yards and buildings – but deterrents must be installed to provide some form of barrier.

“We’ve blocked one passageway in the yard that runs between the farm buildings. We’ve made it badger-proof at one end and fitted the rubber belting to the gate that runs across the yard.

“It means the area is no longer a thoroughfare for badgers. They are creatures of habit and won’t go into an area they know they can’t escape from.”

Mr McGrath is a committee member of the government’s TB eradication advisory group. He believes cattle farmers in areas where there are no infected wildlife populations should be even more diligent in their efforts to avoid TB getting into their herds

“It’s not a lost cause for them, which is why they should be even more committed to preventing TB getting into their herds.”

Only buying pre-movement-tested cattle should be standard practice for cattle producers.

See also: Keep up to date with the latest bovine TB news

“Beef heifers probably pose one of the biggest risks, and farmers need to be more aware of that. A lot are bought from high-risk TB areas and come north with the primary intention of being finished. But some often end up being sold on as breeding females.

“Unless the origin of these beef heifers is known they can pose a risk, but it’s important to remember that cattle bought from a high-risk area – after asking the right questions about their TB history – can pose no more risk than cattle bought from a lower-risk area. Anyone buying cattle must ask sensible questions about the TB status of the herd they are coming from.

“What concerns me is that in areas where there have been TB flare-ups in the past – and where farmers have initially been keen to undertake voluntary pre- and post-movement testing of bought-in cattle – in reality their commitment to test actually hasn’t happened. No one can afford to be so complacent,” Mr McGrath says.

Cheshire may be at the edge of the high-risk TB area, but there is still a lot of endemic TB in the county, says vet Bridget Taylor of Wright and Morten.

“It appears TB hasn’t yet spread northwards into cattle populations beyond Cheshire, although cases that have occurred in Lancashire and Cumbria have occurred because of bought-in cattle arriving into those counties,” she adds.

In more than 100 road-kill badgers tested in a survey carried out by Liverpool University, 25% were found to be infected with TB.

“That figure didn’t surprise me because some of the infected badgers tested were from within my practice area, but it was worrying that although these badgers were within the high-risk area, some were at the northern edge of it.

“It’s significant but nevertheless it’s difficult to draw a conclusion from that statistically.”

Ms Taylor says the primary challenge facing farmers in endemic areas of TB is to keep badgers away from cattle.

“Protecting sources of cattle feed from contact with badgers is very difficult but every effort should be made to try and achieve that. Nevertheless the biggest problem in controlling TB is trying to keep badgers and cattle apart.”

Ms Taylor says there continues to be “loopholes” in the system that hampers effective control being achieved.

“The lack of sensitivity of the TB test is such that pre-movement-tested animals that pass the test aren’t necessarily definitely safe. So anyone buying from an area where there has been TB needs to look more critically at the testing history of the farm the cattle have come from.”

Ms Taylor says that as far as vets can tell, TB is being held back from a further spread northwards by the natural barrier of the M62 motorway south of Manchester.

“Farmers outside endemic areas tend not to get too wound up about TB until it lands on their doorstep, but it’s important for them to become more aware of the risks posed by cattle movements because for most of the time the disease arrives by cattle,” she says.