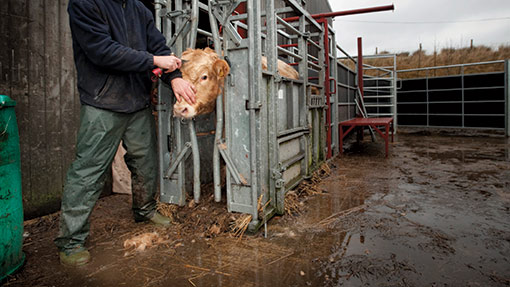 A Cumbrian farmer has voiced his concerns over the risk of injury posed when clipping cattle for slaughter.

Presenting cattle for slaughter in a hygienic condition at the abattoir is the responsibility of the farmer, under government Meat Hygiene Service standards, to avoid contamination of the carcass.

Although clipping is not a legal requirement, it is a common method used before sending animals to the abattoir.

But beef producer Steven Graham says clipping “boiling mad” beef cattle in a crush is a dangerous job that farmers should not have to do.

“Having to use and manipulate clippers through the metalwork of a crush and on animals that have rarely been handled is a very dangerous job that beef producers shouldn’t have to do,” he explains.

“It’s bad enough that we risk getting an arm broken and the impact that sort of injury has on a family business, but a lot of us are going to end up suffering physically in the long term from all the battering and bruising our hands and arms get doing this job,” says Mr Graham, who farms at Gilsland, near Carlisle.

“It’s not something we should have to do on farm.”

“It takes a lot of time sorting cattle and getting them into the race and crush for clipping, but because there are considerable risks to the operator we now always make clipping a two-man job just in case there’s an accident. If you get an arm trapped you are in big trouble.”

Many producers believe that ensuring the cleanliness of cattle on the slaughter line should be the job of the abattoir and cattle should be clipped after slaughter. But abattoir owners believe this would present a greater risk of contamination of the carcass.

And with some abattoirs needing to achieve a throughput of one beast slaughtered every minute, there is a reluctance to offer a clipping service for cattle that need attention based on the time and extra cost involved.

Dr Phil Hadley of Eblex says it’s essential that farmers have the right protection in place when clipping cattle. “It’s not a risk-free operation and the crush and equipment being used must be fit to do the job safely.

“The Food Standards Agency guidance is clear and requires farmers to avoid the risks of contamination once the animal is slaughtered by clipping across the brisket, along the belly cut line and on the flanks.”