Herd health and lameness are set to benefit from a body condition scoring (BCS) app farms can use to target management at cow and herd level and flag “at risk” cows.

It follows research showing an increase in cases of lameness after loss of BCS and the subsequent fat loss from the digital cushion in the hoof.

Calving down below a BCS of 2.5 increases the probability of lameness develo 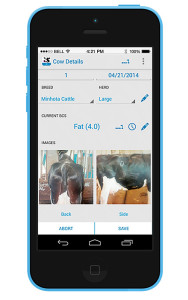 ping, a spokesman for Bayer Animal Health, the company behind the free app, told Farmers Weekly.

See also: How to get stocking rates and nutrition right

Similarly, the probability of lameness increases if cows lose 0.5 of a BCS.

The app is designed to save time spent gauging herd condition on farm by incorporating the AHDB Dairy BCS system and storing and translating scores into data to drive management considerations.

“This is giving farms an easy way to build data giving a BCS history of the cow but without the paperwork,” said the Bayer spokesman.

“Herd level and cow level data can be managed and interpreted from your phone.”

Based on the Penn State system, Bayer stresses the app is “nothing new” for farmers to learn.

Cow and herd level progress can be tracked to 0.25 of a condition score, with the app aiming to help all units but particularly those struggling to find time to BCS successfully.

BCS cattle should be done at least four times each year and ideally “as much as possible,” the Bayer spokesman added.

“Quarterly condition scoring really is not enough, it should be more often and the app can be used by anyone on the farm to offer a consistent result.”

In addition to monitoring mature cows, Bayer underlines the importance of weighing youngstock to diagnose subclinical disease – the “biggest problem” in rearing animals.

“Weighing young animals is important for the diseases at levels you can’t see. The only way you pick up on these is being very sharp eyed or by weighing them as a first indicator that something is wrong,” the spokesman said.