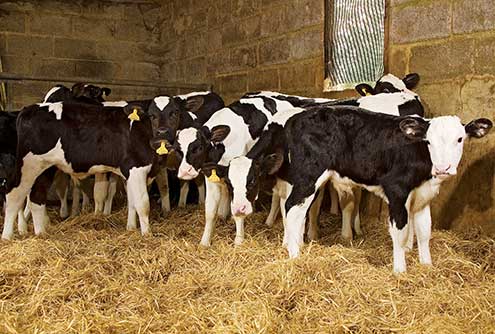 To get an average daily liveweight gain of 1.6kg on a continental beef calf would be good, but to achieve that on a pure dairy calf is impressive. And that’s exactly what Essex beef farmer Graham Purser (pictured) is doing.

He has seen DLWGs as high as 1.88kg and has finished bulls as young as nine months old and puts the success down to feeding a consistent and quality ration.

Mr Purser, of Chelmsford, Essex, buys in about 25 two-week-old medium-quality pure dairy bull calves a month from Beeston Auction Mart, Cheshire, finishing up to 220 a year.

Calves are reared in tents for up to six weeks on milk replacer with good-quality creep feed pellet also available from day one. Calves are gradually weaned on to a high-cost total mixed ration (TMR), with straw in the ration helping rumen development. They are then fed the same ration from 12 weeks until finishing.

The secret to achieving high DLWGs and profits from dairy bull calves is to push them to their full potential, believes Mr Purser. “It’s vital to get the weight gain on them as soon as possible, as you can get the best conformation.

“You can get a better growth rate on Holsteins than anything else as they are bred to eat. If you keep any longer than 14 months you find they grow upwards and not outwards. That’s why we try and finish everything by 12-13 months. Some farmers keep Holsteins for longer to put more weight on them, but when you look at the cost of the ration, it’s not worth it.”

Mr Purser weighs his cattle every month to keep on track, taking them to a minimum of 440kg liveweight and killing out at about 220kg deadweight.

Mr Purser has to buy in all the ingredients for the TMR, with the ration rarely changing. “If I could produce my own hay and corn I would be able to make even more money,” he says.

The ration is fed through a Keenan mixer wagon with a PACE box attached, which tells Mr Purser how much of each feed constituent to add and how long to mix for. He believes this has been instrumental in achieving such high daily liveweight gains.

“I saw a difference in the structure and conformation of the beasts after only two to three months of using the PACE system,” he says.

Before the introduction of this system, Mr Purser was seeing a DLWG of about 1.2kg, with bulls reaching an average of 420kg liveweight at 12 months. The daily liveweight gain has increased to 1.6kg and liveweight to 446kg, attributable to the system’s consistent ration production.

Keenan system specialist Denis Dreux says the PACE system creates an even ration every day. “It gives the loading order and amount of each ingredient and how many revolutions are needed, so any member of staff will be able to create the same stable ration that will not disturb the rumen.”

The increase in daily liveweight gain means his margin is now £113.72 for every finished animal, £70 higher than before he was using the PACE system and feeding a mix of bought-in ingredients.

“The average price I get now per animal is about £743 – I was getting £670 an animal previously. I used to feed seasonal produce such as citrus and potatoes, as I was just buying in the cheapest as a bulk for the diet. I would notice the cattle would become loose and I wouldn’t get any weight gain for a couple of weeks until they settled down. Changing the diet just used to upset their digestion,” he explains.

“Now they don’t have any fluctuations in feed and so the rumen is not disturbed.”

Mr Dreux says these results on dairy bulls are amazing. “Most people rearing black and white don’t get these results because farmers don’t push them hard enough. They are more of an afterthought, given leftover silage, overfed and kept on farm too long. Cost of production outweighs the price of the finished animal, which is of poor quality. If you’re not feeding a proper ration it’s a waste of money rearing them.”

Keep up to date with the latest livestock news