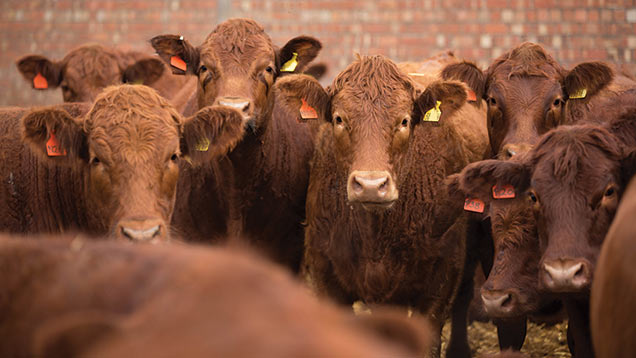 “These types of technology may have traditionally been seen as a pedigree idea, but as costs come down it is well worth considering them in a commercial setting,” he said.

Speaking at a Precision Beef Management Conference organised by Innovation For Agriculture (IFA) Mr Statham said this provided scope for commercial suckler farmers to buy in embryos or select their best cows for ET.

This would not only reduce disease risk from buying in replacements, but enable introduction of high-genetic-merit animals.

With most embryos being produced by pedigree beef producers, he believed significant gains were to be had by commercial farmers producing their own embryos.

“Dairy farmers are already adopting this approach – beef farmers could also select their best cows that are best adapted to their system and multiply them in the herd.”
Jonathan Statham, Bishopton Vet Group

“Dairy farmers are already adopting this approach – beef farmers could also select their best cows that are best adapted to their system and multiply them in the herd,” he said.

Whereas AI or natural service would produce one calf a cow a year, an animal could be flushed several times, producing an average four embryos each time.

This meant there was potential to get 20 offspring from a cow in one year. Embryos could also be frozen for future use and sexed.

“Collection costs from about £200 (including fertility medicines) plus semen costs and from £50 to put the embryo in (the recipient), not expensive compared with the risks of buying disease such as BVD [bovine viral diarrhea] or TB,” Mr Statham said.

He said other technologies such as rumen temperature boluses and activity collars, which could alert farmers when a cow was in oestrus, also provided opportunity to improve fertility with limited labour.

However, ensuring semen quality was top notch was an overlooked key to success.

“As part of a Raft project, we looked at semen quality in 50 UK herds and we got huge variation.

“After thawing, between 3% and 51% of semen was still swimming progressively,” he said.

Poor quality could result from any stage of the semen handling process, but Mr Statham suggested on farm storage and handling was one of the main risks.

“Make sure you thaw in a draught-free, warm environment and thaw in a water bath at the correct temperature and time as recommended,” he stressed.

Mr Statham said “SemenRate” – a new service available nationally following a two year project and now working with seven countries in the EU – would help create a better understanding of things that could go wrong during semen handling.