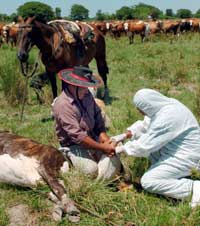 Complaints lodged against the EU for refusing to ban Brazilian beef imports during the foot-and-mouth crisis of 2007-08 have been rejected after an extensive investigation.

In July 2007, the Irish and British farm organisation Fairness for Farmers in Europe, complained that the EU Commission was continuing to allow “inferior Brazilian beef into Europe”.

The organisation appealed to the EU’s ombudsman Nikiforos Diamandouros, claiming that the commission should have imposed a complete import ban on Brazilian beef because of potential animal health threats from the contagious viral disease.

However, on Tuesday (20 July) Mr Diamandouros rejected the organisation’s call that the commission should have imposed a complete ban on Brazilian beef from 2007.

The commission said an outright ban was not necessary because, from mid-March 2008, only beef from approved farms could be imported into the EU.

Import restrictions meant that only 412 Brazilian cattle farms were deemed eligible for export from the EU, compared to around 10,000 previously.

The commission said deficiencies had been identified in Brazilian beef control systems in November 2007.

As a result, it imposed strict import restrictions on Brazilian beef but considered an outright ban was unnecessary.

The Strasbourg-based ombudsman agreed, saying: “The decision not to impose a ban was justified by the available evidence.”

However, Mr Diamandouros criticised the delay in restricting beef imports from unapproved farms in Brazil between February and March 2008.

He also urged the commission to continue its regular inspections outside the EU to ensure that the necessary standards of animal and public health were respected.

William Taylor, spokesman for Fairness For Farmers in Europe, said: “Mercosur countries not up to EU standards should not be allowed to export beef to the EU and instead should be given time to raise their standards.”