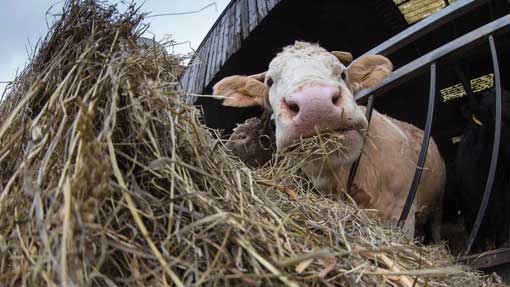 Suckler cow margins are under pressure and making subtle changes to management during the coming winter can help improve next year’s income.

That’s the advice from Scotland’s Rural College’s (SRUC) beef specialist Rhidian Jones who says now is the time to start making initial assessments of the body condition of all cows in the herd.

The aim of winter management is to ensure “the fat don’t get fatter but the thin get fitter”.

“Cow condition has a wide influence on every aspect of the production cycle and ultimately has a big impact on the efficiency and profitability of the cow. It’s not just about aiming for an easy calving that produces a viable calf that thrives.

“A herd’s calving interval is also a reflection on its fertility and there are still many herds with long drawn out calving periods.

“In these situations a farmer is actually losing control of his management, but he can get back on track if his cows are in the right condition at calving and are then ready to cycle correctly to take the bull,” says Mr Jones.

This year’s better grass growing season should see more cows being a lot fitter at housing in late autumn, but there are various ways herd owners can make sure cows are in the right condition for calving next spring as well as using winter feed more efficiently.

“The aim should be to have cows in condition score 2-2.5 by calving time, but with that as a target it also means winter forage stocks can be used more efficiently by having a winter-long planned approach to feeding,” says Mr Jones.

“Cows can afford to lose a little condition in late pregnancy so restricted feeding later in the winter will help them calve down more easily.

“But it’s very much a case of finding a way that suits your system. There are herds where cows come inside at around condition score 2.5 and provided they are successfully held at that, and not allowed to lose any more condition during housing, will still be in the correct condition at calving in spring.”

But Mr Jones believes many more suckler herd owners could look at ways of dividing their cows into groups at housing based on their body condition. And he says now is the time to start making some early assessments to see how cows have come through the summer.

“If the only thing that can be done is to segregate cows into two or three groups for the winter housing period then significant progress is being made – both in the way winter feed is being utilised and the way cows are being managed to get them in the right condition for calving in spring.”

How to assess body condition score

Condition score is a simple assessment of how much flesh, and in particular fat, the cow is carrying based on a five-point scale.
The condition scoring system is based on handling two areas of the cows to assess the level of fat cover – the loin area (between the hip bone and the last rib) and around the tail head.
Handling the cows is important – do not rely on visual appearance.

Score 1 The individual spinous processes are sharp to  the touch and easily distinguished.

Score 2 The spinous processes can be identified individually when touched, but feel rounded rather than sharp.

Score 3 The spinous processes can only be felt with very firm pressure and the areas on either side of the tail head have some fat cover.

Score 4 Fat cover around the tail head is easily seen as slight mounds, soft to the touch. The spinous processes cannot be felt.

Score 5 The bone structure of the animal is no longer noticeable and the tail head is almost completely buried in fatty tissue.

Three groups are considered to be the ideal – something Mr Jones reckons shouldn’t be too difficult to achieve in most buildings.

“Cows that have been suckling calves this summer and had a good supply of grass should come inside at condition score 3 or better.

“With that as a baseline the aim should be to have them in condition score 2.5 by the turn of the year. That means they can be allowed to lose a little condition after Christmas.”

“The fat cows would be over condition score 3, the normal cows would be at 2.5 to 3 and the thin would be below 2.5,” says Mr Jones who urges herd owners to physically handle their cows to properly assess their body condition.

“The spinous and transverse processes and the tail need to be handled to obtain an accurate assessment of body condition. It’s well worth the effort.”

So what’s the advantage of segregation compared with running the whole herd as one?

“If a herd isn’t divided according to body condition, the fatter cows get fatter. As a consequence they are more likely to have calving problems and that could impact on their breeding cycle. But feeding these cows far more than they actually need is also a costly waste of winter feed stocks.”

“Sucklers will consume 2.5% of their live-weight in terms of dry matter intake, so a 600kg cow will eat around 15kg of dry matter a day. And even if it’s poor quality silage, say around 9 MJ/kg DM of metabolisable energy, she will still be eating over 1.5 times more than her maintenance requirement.

“It means fat cows really do need to have their feed restricted,” says Mr Jones who stresses that offering controlled amounts of feed must be in a system that has the feed space allocation to enable all the cows to eat at the same time.

“And where it’s not possible to split a herd into groups it’s worth considering having silage-free days by feeding only straw at weekends as a means of restricting the cows’ nutritional intake.”

Herd owners determined to tackle body condition and make the most of silage stocks this winter should be aiming to have the whole herd in a similar body condition by mid-January and to reach a condition score of 2.0-2.5 by calving.

‘Segregating takes more time but it’s worth it’

Suckled calf producer Doug Greenshields, South Mains, Sanquhar, Dumfries has been segregating his herd of Stabilisers during the winter for the past four years.

“It may take a bit more time to feed every day but it’s worth it in terms of making sure the cows are in the right condition when they calve down.

“And it’s helping us keep a tight calving pattern too. We’re calving 80-90% of the herd in six weeks,” says Mr Greenshields.

All the heifers with calves at foot are run as a separate herd when they are turned out in the spring and that continues throughout the summer and even when they are housed in the autumn.

The fatter cows are also run as two groups and if there are any leaner animals they are also run separately and fed accordingly with either more or less straw in the diet.

The 200 sucklers have a winter diet based on silage with straw. “We feed between a third to a quarter of the diet as straw but we also give a cheap concentrate [2kg a head a day] during January and February to help prevent the dwarfism problems that can occur in some areas where cows fed all-silage diets,” says Mr Greenshields.