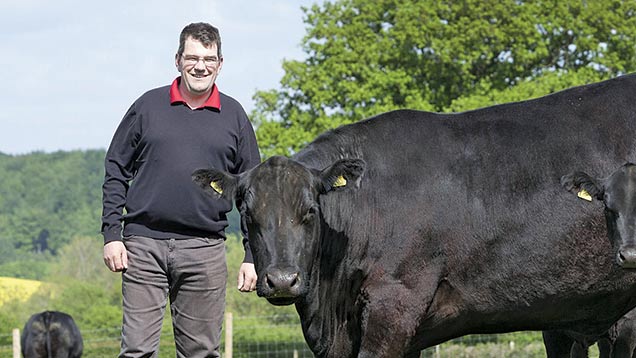 Every now and then you get a month in farming when everything clicks into place, and it’s at times like this when you remember why you get up on wet November mornings to feed cows and get soaked.

We use showing as a big part of our marketing plan to sell our genetics, so this year we decided to go to the Devon County Show for the first time.

We had one of those days that only happen in dreams. We took four animals and all four won first prize.

The party afterwards was, as you expect, messy and, more importantly, we have done some nice businesses with some new customers following the show.

We had a lot of rain in early May and as a result our first-cut silage had more bulk than we expected after a dry March and April.

Interestingly the lucerne flowered about five days later than we expected and the heading dates on both our Italian and PRG grasses were also nearly a week late.

The rain stopped for 48 hours and we got everything right during the silage-making process, so I am hopeful of a pit of high-quality silage when we sample it in a couple of weeks.

Our grazing grass is also now ahead of expectations, so we turned 10 acres of meadow grass into big-bale haylage, which also yielded well.

Calving is just about done with only a handful of calves yet to be born.

Our new winter dry cow management programme of hay and mineral buckets has worked well, with only one assisted calving so far and that was a leg back.

The majority of calvings have been unseen and there is nothing better on this earth than getting up in the morning and finding a calf up and drinking.

The cows look great and we have easily the best crop of calves we have ever had.

We are running at 75% heifers as well, which is great, but probably means we have a few bulls in the autumn block.

Paul Westaway farms in partnership with his wife Kirsty on a 69ha Gloucester County Council farm, running more than 220 Angus and Holstein Cattle. The pair also run an AI business and have recently launched an online steak and wine shop