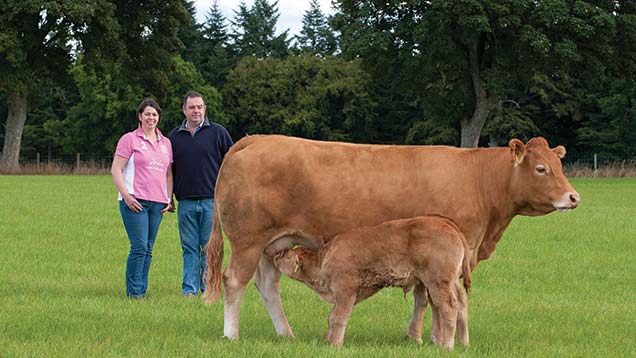 Calving has started and newborns are keener and quicker to get to their feet and suckle, which is great.

We have changed our cow minerals and they look to be doing a grand job. The calving probes have continued to be a useful aid, sending texts of temperatures and possible calvings.

We have had ideal grass-growing weather, but the 8ha we planned for hay is still not cut. The thundery days with heavy showers are not providing suitable hay-making conditions.

Normally we have this job completed before our local Kirriemuir show, but not this year. Hopefully a favourable forecast will be on the cards soon, or the hill cows and ewes will be without their winter feed.

All the crops have had their final sprays. Wheat doesn’t look as if it is going to be very profitable with the amount of sprays we applied.

Bob has also decided this is the last year we will grow winter barley, because expenses are too high. The glen inbye?? fields have also been sprayed in an attempt to control the weeds, mainly nettles and thistles.

The final lamb count proved we had a good lambing, with a record amount of youngstock forward at marking.

The field turnips are looking good and will all be needed in the backend for sheep feed, when the lamb price will hopefully have improved when the supermarkets make way for home-grown produce rather than filling the shelves with NZ goods.

After pregnancy diagnosing the backend calvers, five Limousins and one Charolais  ended up not in calf, having had a second go with the bull. They were not given any more chances, so off to Stirling mart they headed, to average 849kg and 183p/kg or £1,553 a head.

The Royal Highland Show has past and I had the amazing opportunity to be a director of the show for this year. As I stood stewarding cattle in the grand parade, the feeling of pride was evident in my big smile. Watching the greatest show of livestock in the country, it was definitely an “I love my profession’’ moment.