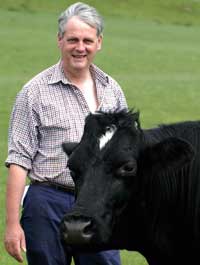 We had more than two inches of rain in one night recently and we’ve hardly had two consecutive days without rain, making dipping sheep challenging. We’ve had to be confident the sheep would have sufficient time to dry before we could make a start.

The grass hasn’t stopped growing because of the rain and is growing faster than the animals can eat it. Fortunately, Number One Son has passed his tractor-driving test, and I only have to mention that the thistles or grass are too long and he’s off with the grass topper. I’ve also noticed the tractors being washed more regularly, how long that will last I don’t know.

I recently sold some 12-month-old bullocks fetching a pleasing trade, even though the price for finished cattle is under some seasonal pressure at the moment.

Rounding them up from a 50-acre park proved challenging. They were regularly inspected and always as good as gold. But, as soon as Lee and myself went to put them in a pen to bring them home, ear and tails were up and they were off. What should have taken and hour, took a full day and it wasn’t until 10 days later we managed to capture the last two. It’s certainly one way to get to know the neighbours!

AI is going well, thankfully, especially when two of our bulls were out of action. One pulled a ligament in his front leg and the other one had a mystery illness that he has taken some time to recover from.

Angela and I recently spent a couple of days at the Royal Welsh Show. We enjoyed it immensely and it’s good to see exhibitors from across the UK doing well in the show ring. If we could only bottle the support and atmosphere at the show, it would be worth a fortune.