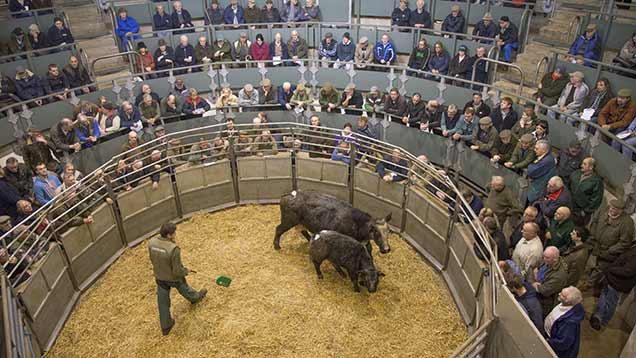 Farmers are furious that a well-used Derbyshire cattle auction market is likely to close next year.

Derby Cattle and Wholesale Markets are likely to be demolished in May 2016 amid concerns that both are running at a heavy loss.

In documents published by Derby City Council last week, Cabinet papers showed both sites were running at a total loss of £280,000/year – and the council authority was propping up most of the bill.

The cattle market site is losing £190,000/year and the council said it was unsustainable to keep it open as a livestock and produce market.

“There has been no consultation with the NFU, local farmers and even the auctioneers have had no advance notice of the closure.”
Andrew Critchlow, NFU

The site, off the A52 and near the city centre, would be demolished and alternative industrial or warehousing use is being considered.

It is estimated £2m would need to be raised in order to keep the site open.

Farmers, who are already struggling to cope with low prices and high costs, have reacted angrily to the threat of closure.

Fifth-generation livestock farmer Stewart Spibey, 59, who farms in Ambaston, said the closure of the site could drive him out of business.

“It is terrible news and it is disgusting. It is a disgrace and I don’t think it has been thought through,” he told the Derby Telegraph.

“There are a lot of farmers, myself included, who rely very heavily on this market for our trade. The next nearest is in Newark, or Leek, which are miles away from me.

“Having it here in Derby is very convenient. It is a 15- or 20-minute drive, which is really good. Being forced to go much further means an increase in petrol prices and the cattle will be much more unsettled.

“That then doesn’t look great when they are being auctioned, because farmers want to buy settled and reliable cattle.

“I think 10% of my profits will be down weekly because of these changes. It could potentially finish the business off, which would be terrible.”

Andrew Critchlow, NFU county adviser for Derbyshire, said: “Derby market has been part of the fabric of livestock, dairy and fresh fruit and vegetable production for many generations.

“Many farmers rely on the market for the sale of their animals and produce and as a weekly meeting place to catch up on news from the industry and beyond.

“Although we knew the council had concerns over the viability of the market and that it was minded to close the site, the sudden announcement that it will close next May has come as a shock.

“There has been no consultation with the NFU, local farmers and even the auctioneers have had no advance notice of the closure. We will be calling on the council to defer the decision to allow time for alternatives to be explored.”

The NFU will be consulting members over the coming weeks to investigate possible ways of keeping the site open, or at the very least, find a suitable replacement. The union has asked to meet councillors to make a strong case for the continuation of the market.

Local NFU group secretary Jim Watt said: “There are alternative livestock markets in Derbyshire and the surrounding counties, but many are more than an hour’s drive away, which makes selling livestock much more inconvenient and longer journeys are more stressful for the animals.

“Some businesses will be badly affected by the council’s decision. We will be challenging the Derby City Council to justify its proposal to close the site, without any prior consultation and its lack of any plans for the future or for an alternative market site.”

Alastair Sneddon, senior partner at Bagshaws, a partner firm in Derby Market Auctions, said he felt the decision to demolish the markets’ site had been rushed. “It feels as if everyone is being railroaded into making the decision to close the markets when other options have not been fully explored.”

The council’s official’s report on the rationalisation of the site will be considered at a closed Cabinet meeting on Wednesday (15 July).

Are you a livestock farmer who uses Derby market? Tell us how its closure would effect your business. Call the newsdesk now on 020 8652 4915 or email: philip.case@rbi.co.uk