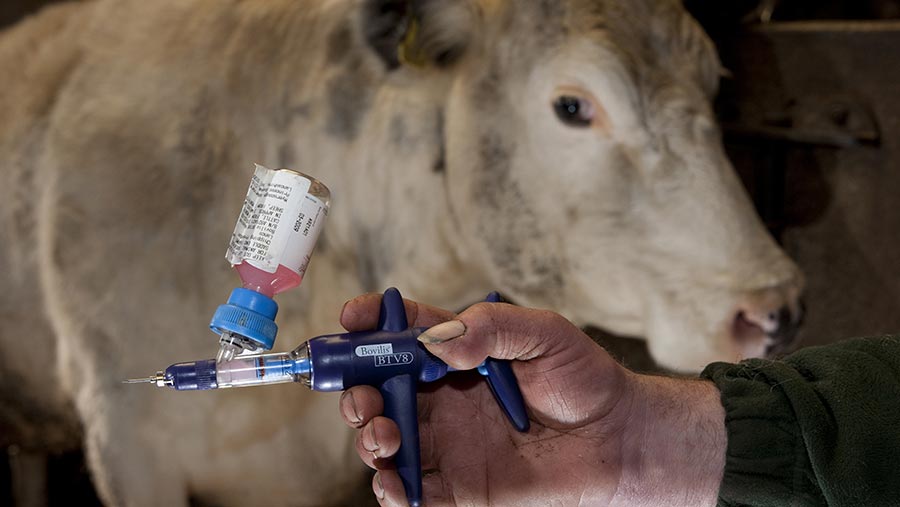 Farmers are being urged to recognise the risk of bluetongue spreading to British shores and should carefully consider whether to invest in vaccinating livestock against the virus, says the British Veterinary Association (BVA).

This message was reiterated by the NFU, which says there is a “fairly good risk” of bluetongue spreading to England from France – where a total of 154 cases of bluetongue serotype virus 8 (BTV-8) have been reported since August.

NFU livestock board chairman Charles Sercombe says it is therefore “only prudent to warn farmers there is a possibility” the virus could spread to UK shores.

BVA senior vice-president John Blackwell tells Farmers Weekly pharmaceutical manufacturers will only begin to produce doses of the bluetongue vaccine again if there is a guaranteed market for them.

Mr Sercombe says the NFU is lobbying Defra and the APHA to push for the vaccine to be made available to farmers.

In the meantime, pharmaceutical manufacturers need to be convinced “there is a need for these vaccinations and that there will be demand,” he adds.

“That is the main challenge – to gauge the likely uptake of vaccinations,” says Mr Sercombe.

“Manufacturers are only going to produce vaccinations if there is a market for them. So we have to engage with the sector to determine what uptake there will be,” says Mr Blackwell. “We have to recognise the risk we face. We need to set out all the information so we can make a decision on whether there will be a cost benefit.”

According to Mr Blackwell, bluetongue vaccinations cost farmers about 80p/dose during the previous UK outbreak in 2007, with cows requiring two doses and sheep one.

He acknowledges, however, that given current challenges, such as low milk prices, there “has to be a  robust business case for farmers to vaccinate against the disease”.

The outbreak in France and what it means for the UK

According to the French ministry of agriculture, 154 cases of BTV-8 have been detected in central France since August – in what is the first outbreak of bluetongue in the EU since 2011.

Clinical symptoms were first found in a single sheep on a farm in the Allier region of France in August 2015.

In response, French authorities introduced a raft of disease-control measures, including a restriction on animal movements in an exclusion zone 150km around the affected farm, which has since been extended to cover a significant area of the country.

If the adult midges responsible for its transmission survive the winter and reappear in late spring – as is expected – BTV-8 will likely reach the northern cost of France, says Peter Mertens, head of vector-borne diseases at the Pirbright Institute.

“In this case, infected midges are likely to be blown across the Channel, potentially infecting livestock and starting an outbreak of disease in the UK, possibly in mid- to late 2016, although it is difficult to be certain about timing,” he says.

The level of similarity – “greater than 99.9%” – between the BTV-8 strains behind the recent French cases and those across Europe starting 2006 “indicates the vaccines used to fight the previous outbreak will still be effective”.

However, this high level of similarity poses a number of questions, says Professor Mertens.

“In particular, it is unclear where this virus has been for the past five years, with no apparent cases, suddenly re-emerging to cause disease. Has it managed to persist undetected in the region, or is this a reintroduction from an unknown source?” he adds.