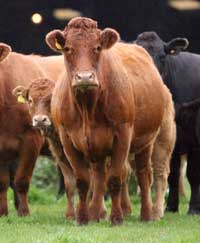 Cattle farmers in the east must be aware liver fluke is on the rise, with an increasing numbers of vets in the area reporting an increase in cases as well as deaths.

A survey conducted by Merial Animal Health revealed 90% of vets dealing with cattle in the east of England and Scotland agreed or strongly agreed that they were seeing more cases of liver fluke than in the past.

One vet noted he had dealt with 36 new cases through his practice alone.

The survey also found that 90% of vets agreed or strongly agreed that liver fluke was a problem in the east as well as the west.

Fiona MacGillivray, vet advisor with Merial Animal Health, says the survey bears out what we have been hearing for some time. “The incidence of liver fluke in cattle has significantly increased in the east and fluke can no longer simply be considered a problem of the wet west. Many of these practices had never had to deal with fluke until a few years ago but now it is a significant issue.”

Of those vets surveyed, 65% strongly agreed and a further 20% agreed that “Liver fluke has a significant impact on the health, performance and productivity of infected cattle.” One vet noted he had witnessed cattle deaths as a result of fluke and another noted that he was extremely concerned about the impact of fluke on the health and performance of cattle seen by his practice.

At worst fluke can cause the death of affected animals, at best and more commonly, fluke do not cause overt clinical symptoms in cattle but significantly impair their performance, says Ms MacGillivray. “Indeed, fluke can reduce cattle liveweight gain by up to 1.2 kg a week and add anything up to an extra 80 days to finishing. As a result, fluke infection is a costly problem but in the east of the country farmers may not be aware of how much of a threat it is because they have not had to deal with it before.”

“Not only is fluke increasing and spreading across the country, it is also becoming much more of a year-round issue. Where the parasite used to be much more of a concern during the autumn and winter, it is now also having a real effect during the spring and summer too.”

In terms of treatment, a fluke dose given eight – 10 weeks after turnout will minimise pasture contamination from fluke eggs, ensure maximum growth from grass and reduce the risk of fluke infection later in the year.

Farmers can either choose a straight fluke product which can be given alongside an existing planned wormer treatment, or alternatively a combination endectocide can be used.