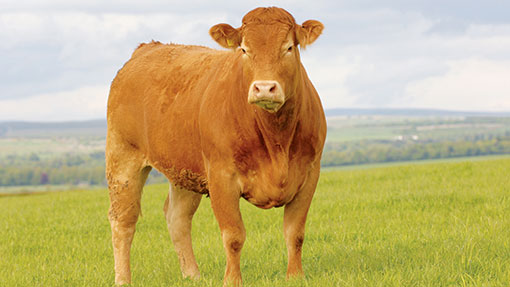 One Cumbrian suckler producer has adopted a strict approach to managing his heifer replacements.

Mr Harryman, who farms with sons Mark and Shaun near Keswick, runs about 100 pedigree Limousin cows as well as 40 commercial sucklers combining a mix of Limousin x British Blue breeding.

The family is well-known for Limousin bulls bred in their Keskadale herd, many of which sire top primestock show winners, but the emphasis placed on the breeding and health that underpins their pedigree herd is mirrored in the management of their commercial sucklers.

The replacement policy at Keskadale is based on home-bred heifers as well as heifers bought-back from herds that have used the bulls bred by the family. However, both sources of supply have to satisfy strict criteria on health status and the past performance of the dam.

“The performance of the dam is absolutely critical and most of our cross-bred sucklers are out of cows that have consistently bred well in the herd. That has to be the primary yardstick for selecting replacements. There’s no point retaining females from cows that have never excelled themselves in terms of the progeny they consistently produce, otherwise you never make any progress,” says Mr Harryman.

The importance of benefiting from strong cow families certainly isn’t solely the preserve of dairy herds, according to the Mr Harryman.

“Because we sell a lot of bulls direct from the farm into other suckler herds, it gives us another source of replacements. We’ll often buy a really good show-quality heifer from a herd that’s used one of our bulls because we know the strength of the females behind the calf’s Limousin sire.

“Its really about dealing with known quantities in terms of breeding and performance,” says Mr Harryman.

The family has adopted a “no nonsense” approach to herd health in their pedigree cattle and has applied the same stringent selection procedures to the commercial sucklers.

The full gamut of health testing covering Johnes, BVD and IBR is now applied to all cattle. Replacements are blood-tested and vaccinated as bulling heifers and again prior to calving.

“We have a very low tolerance rate on health and if there has been any suggestion of a problem occurring in a particular cow family, that family has been culled out of the herd.”

But the Harrymans have strong views on when to bull replacement heifers. Plenty of size and growth is absolutely essential and a heifer will even be left empty and allowed to “slip” out of the calving pattern, if it means allowing her the time to put on more growth.

“Bulling replacement heifers too young or without enough size all too often gives you problems later. You pay the price of trying to get immature first calvers back in-calf as second calvers.

“We’ve got some biggish heifers now that some wouldn’t hesitate to bull, but we’ll leave them and serve them next spring even though they’ll not calve until nearly three years old.”

The herd’s heifer replacement policy – based on the proven performance of the dam, high health status and allowing heifers enough time to grow before putting them in calf – is certainly paying off.

“Healthy cows that live a long time and stay healthy are the most profitable so that’s what we’re aiming for in the way we select our replacements. And we have plenty of cows in the herd that are still going strong at 10 years old.”

Making sure heifers suckling their first calf are run separately from the main herd is an important final stage of the herd’s replacement policy.

“We do nurse them a bit because they deserve it. We try and get the calves off these heifers a little sooner, but we would never consider culling a good heifer just because she was going to calve later than the rest of the herd.

“There’s a lot of advice being given about tight calving patterns in suckler herds, but depriving a herd of possibly 10 years of productivity from a heifer just because she has been left to grow and calve when it’s best for her doesn’t make sense.

“If you’re putting a lot of effort into your replacement heifers, there needs to be some flexibility in the system,” says Mr Harryman.