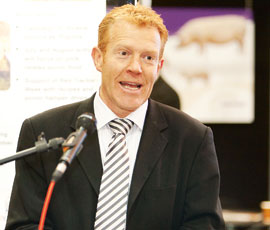 Despite its challenges, the farming industry has a bright future and now is the time to build on the British agricultural brand said BBC Countryfile presenter Adam Henson while opening this year’s Beef Expo.

“We have an exciting industry and a very exciting future – the industry is in a great place because people are interested in where their food comes from and farmers are now, once more, very popular across the nation,” said Mr Henson.

“We are popular because we have such a fantastic industry and we produce some of the best food in the world – there are some exciting times ahead. Now we need to build the British agricultural brand and entice the consumer while we have got them,” he added.

Also speaking at the opening ceremony, chairwoman Rachel Gascoine called on the government to follow through on its promises, blaming the “looming threat” of bovine TB as a key deciding factor for those leaving beef production.

“All too often the Government words have not been backed up by actions, but the time for talking is over – this industry needs action and it needs it now,” she added.