One of Britain’s largest pedigree beef herds, which takes its name from the Scottish Isle of Luing, where the cattle are bred, is commercially managed in a New Zealand-style system.

This closed herd of 325 pedigree breeding females live outside all year round. From the outset, they have been selected for low-cost productivity, ease of management and functionality.

See also: Why more beef farmers are switching to Luings 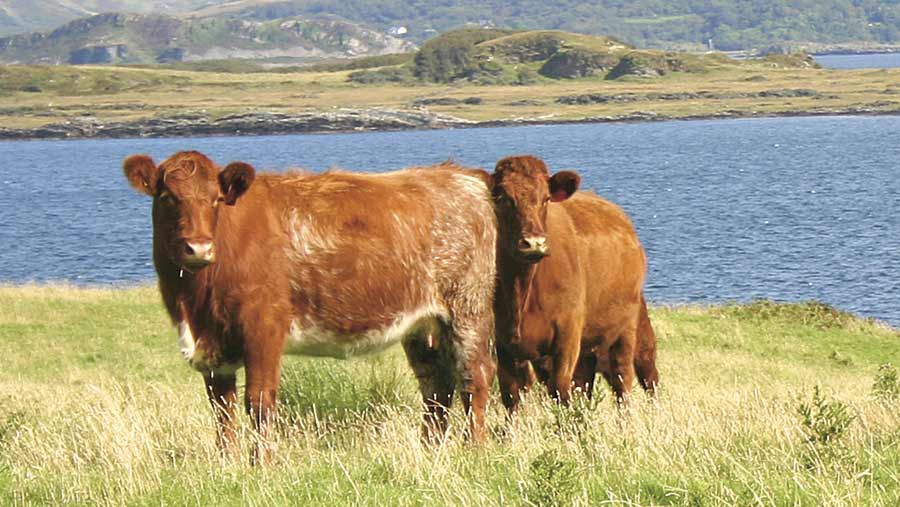 The resident farmer is Shane Cadzow, whose late father, also Shane, was the eldest of the three Cadzow brothers who founded the Luing breed on the island.

“With no government financial support, farms and stock in Australia and New Zealand have to pay their way, survive and thrive – otherwise they’re shipped out. No questions asked,” says Mr Ferguson.

Luing, with its steady and constant growth from grass and efficient, low-cost production, offers the very welcome opportunity to farm New Zealand-style in Scotland, he says.

Much of Luing has never been ploughed, with soils maintained in good heart with lime and phosphate.

The Luing cows run in six family groups on their own, unfenced, hefted, “hill” territory. Retained heifers stay on the hill of their birth.

There are currently 17 stock sires, with all but four home-bred. Bulls work in family teams, moving on after two crops.

Replacement heifers and potential stock bulls (for use and sale) are selected initially by eye, followed by assessment of their dam’s history for fertility, ease of calving, mothering ability, productivity, ease of management, temperament, hardiness, longevity, udder, legs and feet.

Selected young bulls, (13 from the 2017 crop as of 1 January 2018), are regularly reviewed, with reasons sought to cull, rather than keep.

Annually, just under 80 heifers are selected at weaning, with 48 bulled at 15 months, to calve at the two (2017 bulling – 44 scanned in calf). The remainder are sold as rising two-year-old bulling heifers at Luing Society sales or privately.

Cows and heifers are bulled to start calving in early February. Heifers run with the bull for nine weeks, cows for 12.

In-calf heifers stay on their hill until just before calving, when they are brought inside to calve, staying in until their calf is about a week old. They go out onto “in-bye”, better grazing, to avoid bullying from older cows.

After weaning, the first-calvers return to their family hill, where they stay for the rest of their productive lives.

This year, 204 cows and heifers are due to calve in the first four weeks, with a further 62 during the next four.

The earlier cows will calve on the hill, with little human intervention. Calves will be tagged at daily silage feeding. After five weeks, the remaining cows will be brought down closer at hand, returning to their hills as calves are tagged.

“The undulating terrain of the hills, giving cows good natural shelter, also enables them to hide away when calving,” adds Mr Ferguson. “So, when there’s just tens of cows left, instead of spending hours hunting over hills, it makes sense to have them more accessible for checking. Archie and Jack Cadzow are keen to do this by drone.”

Cows that do not scan in calf generally get a second chance.

These are usually cows that were under pressure at bulling, possibly following twins, or calved at the tail end of calving, says Mr Ferguson.

The only winter-housed stock are the bulls – stock sires and promising youngsters.

Cows and heifers receive daily silage with minerals from early December. Mid-January concentrates are added – cows receive a kilo a head/day, increasing in early March to two kilos, until bulling in early May.

All feeding is scheduled to end mid-May.

All females are pedigree and earn a premium, boosted by their health status, when sold to commercial and pedigree buyers, in ages ranging from weaned calves to groups of mature, in-calf cows.

“We have a premium market for breeding bulls and almost every female, all produced at a lower cost per head than most commercial herds.

“We’ll continue following the philosophy of the Cadzow brothers who developed the Luing breed – to always aim to improve standards by selecting for productive and easy management qualities.”