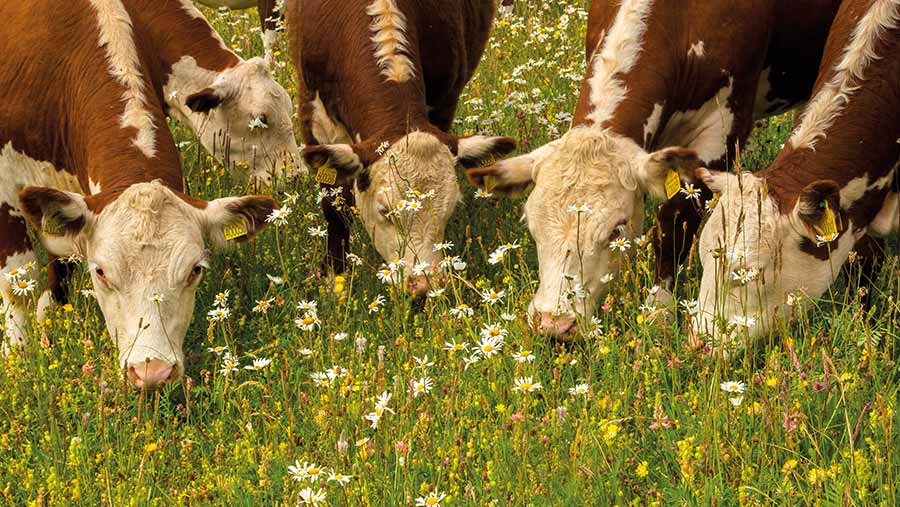 This has enabled him to tap into environmental schemes and extend the grazing season by a month on his mixed farm.

“Given the right motivation, you can create biodiverse grassland, whatever the starting point,” says Mr Boyd.

He had taken part in earlier environmental schemes, but the right motivation for him came with Organic Higher Level Stewardship (OHLS), which provided a financial alternative and an opportunity to “put things back in balance”. 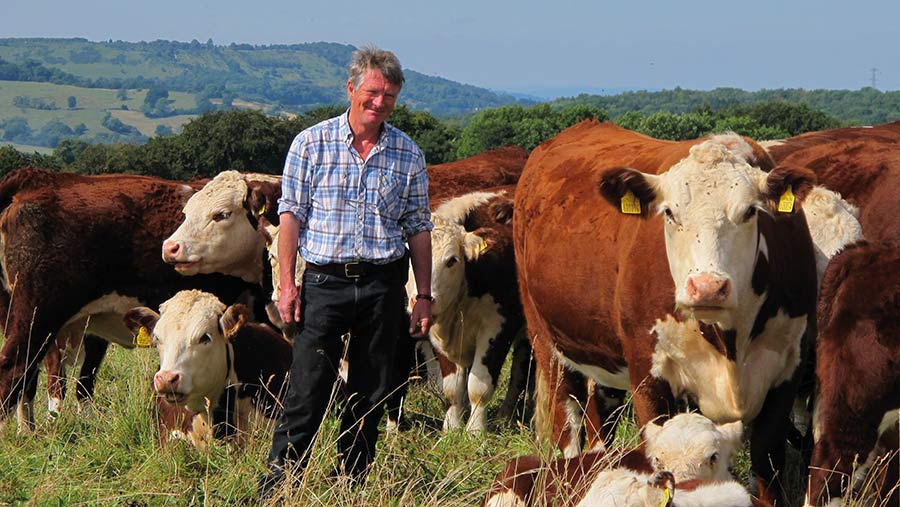 However, he is concerned the Environmental Land Management (ELM) scheme may inadvertently spell the end of mixed low-input farming – the very system he says can deliver all that the Environment Act seeks to achieve – because it won’t receive sufficient support.

“But such farms are not very profitable without these public goods being recognised and rewarded, which is what the Environment and Agriculture Acts are meant to be all about.”

The shallow Cotswold brash soils at Whittington Lodge Farm, near Cheltenham, where Mr Boyd farms 280ha (692 acres), are not very productive, and the creation of wildflower meadows was a logical move, he says.

“It started off as the right moral decision to make, but it can’t just be an indulgence, there has to be a financial case – and there was. But you don’t just make a decision and that’s it – it’s a journey, and we’ve been modifying and adapting ever since.

“And the more wildlife you see, the more you want to do.”

For 60 years, there was no livestock on the farm, but having grazing ruminants is critical to managing these habitats, says Mr Boyd: “You’re managing a transition habitat, and grazing, trampling and dunging are critical.”

A native suckler herd of Herefords was brought on to the farm in 2007.

Some of the wildflower meadows had previously been in arable production and set aside; now they have up to 45 different plant species.

This is substantially less than the amount received under OHLS.

While Defra has recently reversed its decision to close down OHLS – which means farmers with agreements can now roll over their contracts – the decision comes too late for Mr Boyd.

His scheme ended before the decision was made and he had to apply for CS instead, involving “a huge amount of work” and a substantial loss of income. 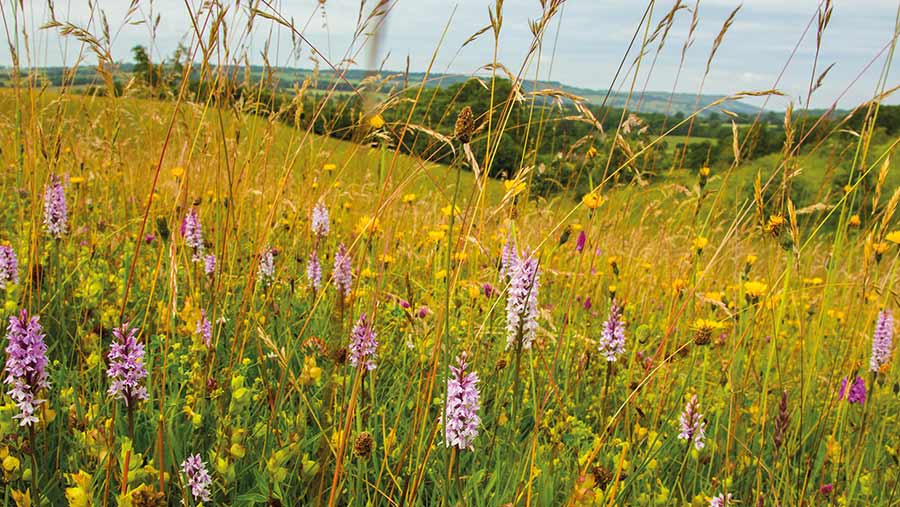 Although some of the OHLS payments Mr Boyd was getting for arable reversion to grassland reflected loss of earnings from arable production, and the focus of CS is established grassland, it’s still a big financial hit.

“We will lose £20,000 moving to CS, and it comes with a lot more restrictions that will limit our farming,” says Mr Boyd. “The farm is still providing multiple public goods, but for a lot less public money.”

Under CS, arable farmers continue to attract higher payments than their grassland counterparts.

“Arable options are rewarded in the profit foregone principle by roughly twice the rate that applies to grassland options,” he says.

“So my high-ecological-value wildflower meadows will reward us £300/ha, whereas wild bird seed crops attract £640/ha.

“These payments do not attract farmers to establish wildflower meadows.”

Under CS, the permanent pasture will be managed under options for organic improved grassland, very low inputs, and lenient grazing – where grass is managed to achieve swards of varying heights.

The taller grasses support invertebrates that in turn provide food for farmland birds, while shorter areas of grass offer areas from which the birds can access the food in the soil.

Herbal leys are a valuable component of the arable rotation, improving biodiversity and soil health. In addition, the use of deeper-rooted plants like chicory and sainfoin have proved “an absolute boon” in dry years.

“We have opted for half our area of herbal leys –  32ha at £115/ha, totalling £3,680. Mob-grazing would achieve all the aims of the organic herbal ley option without the overly bureaucratic restriction.”

The Herefords graze the leys on a tight rotation. The aim is to move them daily, for a maximum duration of three days, and with up to two months between each grazing period.

Located at around 250m above sea level precludes rapid spring growth, but using the herbal leys has extended the end of the grazing season from mid-October to mid-November.

The grazing system has had a transformative effect on the soil, says Mr Boyd.

“Soil organic matter (SOM) levels should double from a low arable base under such management.

We use proxy measurements of worm counts, slake test and visual examination of soil structure score, as well as laboratory SOM results – although that is complicated by the higher calcium carbonate content of our soils, which cooks as well in the loss on ignition test.”

“It answers so many of the problems we now have,” he says. “Surely, before long, cheaper beef from South America or the US will be here, and we will have to differentiate the products we sell.”

“You can’t fail but be net-zero – assuming methane is recognised as a short-lived gas, unlike the permanent effect of carbon dioxide and nitrous oxide.”

There has never been more interest in the provenance of food, he adds. But there are hurdles to overcome, not least recognition and reward through the ELM scheme.

Species-rich meadows form just 2% of the UK’s total grassland area, yet sustain the vast majority of grassland biodiversity and contain 58% of the conservation priority species of lowland farmland.

Prospects for improving grassland biodiversity depend more than ever on farmers and their ability to network with one another, says Lisa Norton of the Land Use Group at the Centre for Ecology and Hydrology, Lancaster.

“Innovative Farmers groups, Facilitation fund groups, Pasture-Fed Livestock Association – and all sorts of other networking groups like the mob-grazing WhatsApp group – are springing up and providing farmers with the confidence and knowledge to try new things,” says Dr Norton.

While the focus for a long time has been on one species in grassland – largely because it has been developed to respond well to nitrogen fertiliser and is high in sugars – it is singularly focused on helping to produce more meat or milk, she says.

“If we think of grassland in terms of its wider roles in the landscape – soil carbon, water regulation and so on – a diversity of grass species, as well as herbs and legumes, would be vastly preferable.”

This diversity is also likely to be more suitable in a permanent sward. Ryegrass in a sward decreases over time and has historically been ploughed and resown – which is itself a very damaging practice, not least for soil carbon and biota, she adds.

“Ryegrass is shallow-rooted, so it’s not great for soil carbon, drought or indeed flooding. Other grasses, like the fescues or cocksfoot, are much deeper rooted.”

Grasses differ in the time they are most productive and having a mix of species takes advantage of that. Herbs and legumes also have different micronutrients, rooting depths, pollinators, resilience to drought and flooding and so on, says Dr Norton.

Fitting the animal to the place is also very important, she adds. The large breeds that need consistently high-quality forage probably don’t suit what actually grows best in most parts of the country.

“I think transformation may finally be on its way. I see more farmers taking their own decisions, and many thinking about the long-term sustainability of production on their land and finding ways to best manage their land, rather than following a set way of doing things that is increasingly outdated.”

Lisa Norton and Ian Boyd spoke at a series of webinars on biodiversity in grasslands, organised by the British Society of Animal Science and Stapleton Trust, alongside the British Grassland Society.