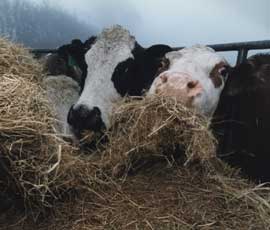 Beef farmers have been advised to double the manganese supplement and restrict silage intake to 75% of the total DM intake for pregnant cows to prevent calves from being born with Long Bone Deformity.

Long Bone Deformity causes calves to be born with shortened bones, often giving them a bow-legged appearance. Other signs include dished faces and domed heads and in severe cases calves have to be put down as they cannot stand to suckle.

Experts at Scotland’s Rural College have increased their recommendations of manganese supplementation after recent studies indicated a compound produced during the silage fermentation process could be binding with the essential element, making it unavailable for the cow to digest.

Results found hay to have the lowest levels of manganese, but cows on this diet had the highest blood manganese level and produced no deformed calves. The grass silage had more manganese but lower blood levels than the hay group and 28% of the calves born suffered from Long Bone Deformity.

Meanwhile, the red clover silage contained the most manganese, but gave the lowest blood level with 38% of the calves born deformed.

Basil Lowman of SAC Consulting says: “Although there is no hard scientific evidence that manganese is causing the problems, the target is a total intake of 1,000mg of manganese a cow a day.

“If calves are showing symptoms Dr Lowman suggests using a supplement containing around 7,000mg/kg of manganese. “It is well within the allowances and is relatively inexpensive,” he adds.

Plan for a healthy beef herd