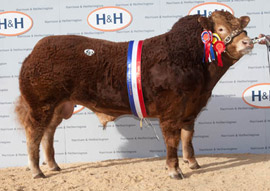 A 120,000gns bid for a Limousin bull at the weekend has smashed the breed world record and all UK breed record.

The previous record price paid for a bull in the UK was £105,000 for Limousin bull, Haltcliffe Vermount, back in 2006.

The record deal was secured at a Limousin sale in Carlisle at the weekend by Messrs Jenkinson of Whinfell Park, Penrith.

The bull, Dolcorsllweyn Fabio, is out of Dolcorsllwyn Awen, a Mas Du Clo daughter, and won junior and overall male champion at the show before breaking in to the world record books.

He has also notched up several awards including overall best home bred bull award in the north west Midlands and North Wales Limousin Club’s competition in 2011.

Speaking about his purchase, Whinfell Park Farm manager, Iain Scott told Farmers Weekly: “He’s an all round bull and he’s completely different to what we’ve got so we were determined to have him”.

Although no one expected such a high, record breaking price on the day, said show judge Gary Swindlehurst, he was correct and had a good top line, and was strong and well fleshed over the plates.

• Go to www.fwi.co.uk/takingstock for more news and pictures from the record breaking Limousin sale.