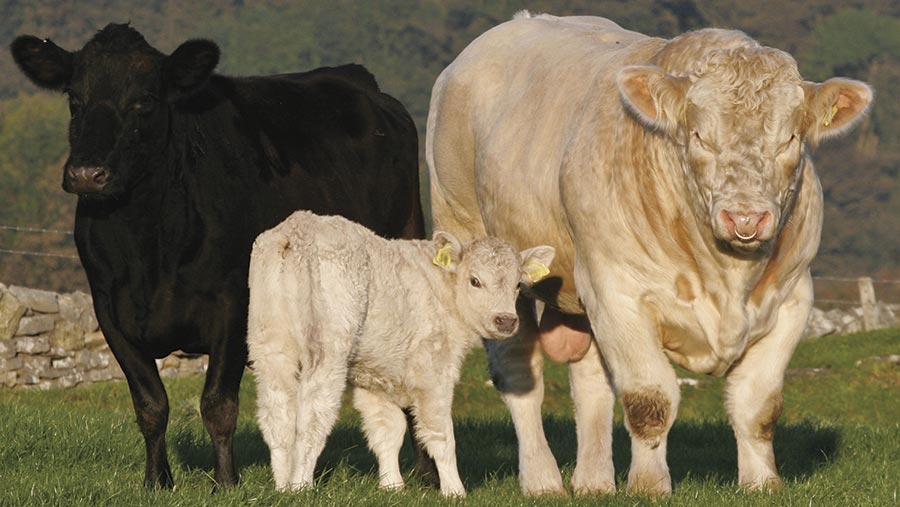 Beef industry leaders believe it’s getting tougher for breeders to get away with manipulating estimated breeding values (EBVs) to improve the value of cattle.

“The EBV system is a fantastic tool for breeders and commercial beef producers,” he says.

See also: Which EBV is most important to livestock farmers?

“Across five trials I have conducted to compare low versus high index bulls with decent accuracy figures, the results showed EBVs work.

In one study, which compared the progeny from a top 1% against a bottom 1% Limousin bull, the extra financial return per calf was a phenomenal £126.

“And the computer analysis underpinning EBVs has been improved, along with more rigorous policing. It means cheating and getting away with it in the long term is now all but impossible,” says Mr Marsh.

The EBV system was introduced in 1990 as a tool for cattle breeders to select animals on a predicted genetic ability.

It relies on huge quantities of data from individual animals, such as birthweights and calving ease, to allow performance traits to be compared and stated. Key information is recorded and supplied by producers.

There are two EBV systems in place in the UK – Signet and Breedplan. They are underpinned by computer analysis services run by Scotland’s Rural College (SRUC) for Signet, and the Agricultural Business Research Institute (ABRI) for Breedplan’s Pedigree Cattle Services.

But, Mr Marsh warns, there are still areas where the wrong data could be supplied either deliberately or as a genuine error.

These are fuelling criticisms and need further tightening, he says.

Mr Marsh identifies birthweight recording as one area prone to discrepancy. “Is it newborn when it’s weighed? Is it 24-hours old with a bellyful of colostrum? Has it been measured with scales or coronary band?” he says.

Mr Marsh highlights calving ease as another EBV measure with scope for variation.

Calving ease is measured on a scale of “one”, where no assistance is required, to “five”, where a vet has had to perform a caesarean delivery.

“I have seen farmers claim to have provided no assistance during calving but it later transpired the cow had a caesarean. Either they don’t understand what’s being asked or they’re attempting to falsify records,” he says.

“We need to educate people to dissuade them from trying to manipulate figures because ultimately they will be caught out by inspections and their businesses will suffer,” Mr Marsh says.

“Even if they are not exposed by the system, it will be apparent to a purchaser that, particularly with parameters such as calving ease, something is wrong. It will very quickly become known that the breeder’s figures are unreliable.

“The few herds where I have seen attempts to cheat have all subsequently lost a lot of business,” he adds.

Breedplan manager Barbara Webster says the current criticism levelled at EBVs is based on historical cases.

“About 10 years ago at a sale you would see stated average growth rates over 2kg a day,” Ms Webster says.

This was often because the animal’s age had been falsified and the calf was actually older than had been recorded, she suggests.

Currently, birthweights are where the most anomalies – either high or low figures – occur.

Any birthweight anomaly or claimed daily liveweight gain of 2kg is put under detailed investigation.

The first verification point is before data is entered on to the computer system, explains Ms Webster.

If it is not picked up initially, sophisticated software, using a complex mathematical equation, also identifies outlier results.

An on-farm inspection, to be carried out independently by National Milk Records (NMR) officials, is then arranged, Ms Webster says.

These inspections are bolstered by checks on every 50th or 100th calf registered, depending on breed society rules. Any late registrations also trigger an inspection.

The query animal and others born at the same time are weighed and DNA sampled.

Signet manager Sam Boon says DNA testing has been the biggest disincentive to falsify records emerging in the past 10 years.

“Breeders know that even if the bull isn’t DNA tested today, it will be in the future,” Mr Boon says.

“It is like having a stick in the background to ensure that sire recording is spot on.”

The potential punishments for misdemeanours are severe. The bull and all of its progeny could be deregistered and a breeder could face a major lawsuit, he says.

The other major change is the sophistication of the computer analysis for both Signet and Breedplan’s systems.

For example, Mr Boon says, if a breeder puts all of their calving ease scores as “one – no assistance”, the software will pick up on the lack of variation because it does not reflect a real-life situation. All of that data is thrown out of the evaluation.

“EBVs for calving ease for this breeder’s cattle are then derived from related cattle in other herds, where accurate data is supplied, ensuring a robust breeding value is produced.

“The breeder who is making errors or falsifying calving ease scores has shot himself in the foot because his own farm data is not used and can do nothing to arrest any potential fall in breeding values,” he explains.

These animals have to be separated out by the breeder so the genetic potential is not masked by the higher feed input, Mr Boon says.

“We sometimes find breeders who record all the animals as treated in the same way – often by accident.

“But if the feed regime groups are not separated, it will be obvious at 400-day weight checks, when the animals are subjected to ultrasound scanning for muscle depth and fat, that some have been pushed nutritionally,” Mr Boon says.

“It is this combination of technology and physical checks that is making it much more difficult to cheat the system,” he adds. 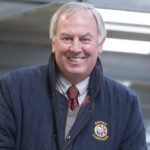 How EBVs have been made more robust

Breeders submit performance records and ultrasound data, which goes to Pedigree Cattle Services and then to ABRI. All breeders have up to 27 days to register a calf.

Every month, EBVs are updated based on the latest monthly registration and performance records. The data is analysed using a mathematical algorithm. The analysis throws up queries about animals that don’t appear normal.

It could be a genuinely outstanding animal or an error at registration, or it could be someone has tried to cheat the system. Whatever it is, we contact the breeder and arrange a visit by NMR inspectors, who weigh the calf and others born in the same batch.

If it is outside the parameters set by the benchmark on Charolais performance, from 300,000 records researched by the Institut de L’Elevage, the calf is deregistered.

The breeder is no longer given 27 days to register and is instead put on a tighter seven-day registration regime.

Any further checks we think are warranted are carried out at the breeder’s expense. There are also random checks made on every 100th calf registered.

Further checks are carried out at sales, where the sale weight is compared with the previous weight records. Birthweights, 200- and 400-day weights are examined and the ultrasound results scrutinised. Any anomalies that show up at sales prompt investigation and farm visits.

In 2015, the British Charolais Society carried out 173 herd checks, and there are currently seven breeders on seven-day notice.

On investigation, if a breeder is found to have a lot of errors, they may be asked to attend a disciplinary committee to explain.

Depending on the situation, the breeder may face censure, a fine of up to £1,000, suspension or even expulsion from the society. 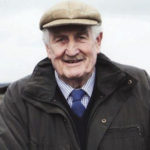 The benefit of EBVs

We started using EBVs from the beginning, 30 years ago, through Signet and then ABRI when the society adopted the new system.

Good, bad and indifferent cattle go through our system and are recorded accurately. We use the system primarily to choose the best replacement heifers.

Any false figure is counterproductive. Aside from the risk of being caught, if you cheat, you lose out in the long run.

There may be short-term gain with a better price. But once that bull gets used, its EBV figures drop, the breeder’s reputation has been undermined, and buyers will stop coming.

I can’t understand why anybody would want to cheat and potentially undermine the system. It is a wonderful scheme if you use it properly.

We use our highest-rated bull on slightly weaker cows to raise their EBVs.

We look for easy calving on the replacement side and a shorter gestation period, which is vital for a good productive system.

We also maintain the growth rates and food conversion efficiency.

Even with selecting for easy calving, we still have birthweights substantially higher than the breed average. Bull calves at Balthayock weighed 53kg on average, carrying their weight in their length.

Slaughterhouses are calling for deadweights of no more than 400kg and good intramuscular fat for flavour.

EBVs provide us with all of the information we need to work more quickly and accurately towards this. If they are undermined, we are working in the dark.