Low average birthweights of 25kg and easy-calving dam lines are key to running an expansive suckler operation profitably and keeping total fixed costs at around £377 a cow, including rent and finance.

This is according to Dominic Naylor, farm manager at the Lilburn Estate, Wooler, Northumberland, who finishes bulls at a 360kg carcass weight in 13 months.

Land is not a limiting factor for the 12,140ha Lilburn Estate. Rather than focusing on kg of output/ha, the drive is on labour efficiency and economies of scale. 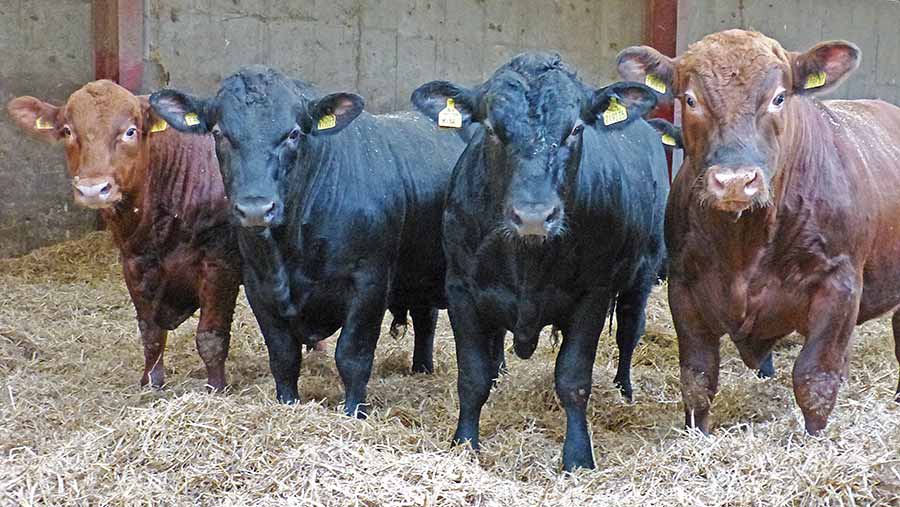 The system runs 400 cows to one labour unit running around 40-50 cows per bull, working on the mantra that “stock works for you, you don’t work for your stock”.

Cows are bred to be a moderate size at 600-650kg and calve outside unassisted; they spend the summer on heather hills and winter on stubbles to keep variable costs low.

“We run at least twice the number of cows per man compared with continental breeds as the main labour pinch point in a suckler herd, which is calving, is relatively easy for us,” explains Mr Naylor, who sees controlling fixed costs as a key factor in post-Brexit survival.

Cows are bulled via natural service in eight-week calving periods. Heifers are bulled in six weeks to maintain herd fertility, which is done at 15 months old to calve all heifers at two years of age. 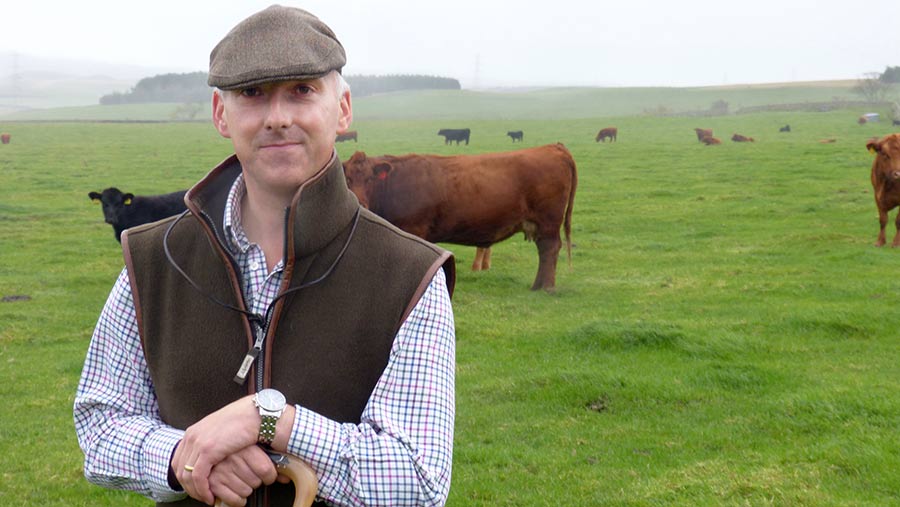 This year herd conception was at 95%. “We used to bull the cows in eight weeks but the extra 50 calves we get from a fortnight’s extra bulling is worth having,” explains Mr Naylor (pictured above).

Cattle managers are encouraged to only check on calving cows first thing in the morning and again before nightfall. Routine (bedding up and feeding bulls) and seasonal jobs (helping gather sheep, fertiliser, silaging) can be done through the day.

“We ranch the cows really,” says cattle steward Davy Heads (pictured below). “They are very easy-calving cattle. They move and graze in herds and even leave their calves in a safe crèche area of the field and go off to graze.” 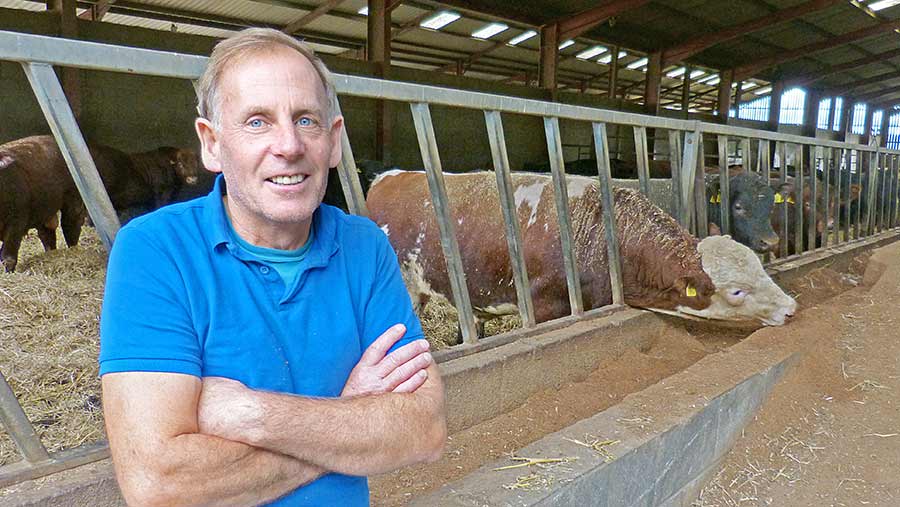 Pure-bred Stabiliser bulls are hitting market specification but a range of Angus, Charolais, Limousin and British Blue genetics are used on commercial cows to increase liveweight gain and conformation.

“I’m starting to experiment with artificially inseminating for an extra 40kg carcass weight,” says Mr Naylor. “We try and use curve benders like the Charolais bull Blelack Digger.

“I AI’d 30 and got 25 in-calf and put the cows on a moor to get on with it. We had 25 white calves pop their heads up above the heather. They’ve also calved the British Blue-crosses fine.

“Limousins and British Blues provide the extra 40kg and Angus so far has resulted in the same weights at around 330-360kg.”

The last pen of bulls were thirteen-and-a-half months old and killed out a 54.3% at a 659kg liveweight and a 358kg carcass.

Heifers are put through a store period on silage and straw and finished at an average of 21 months and 305kg deadweight.

Having doubled herd numbers since 2013 and added another 700 breeding females this year, the estate is now ready to reassess culling policy.

Stabiliser genetics bring prolific cows, with 4-5% having twins each year. This allows fostering on to bagged-up cows that have had calving problems. 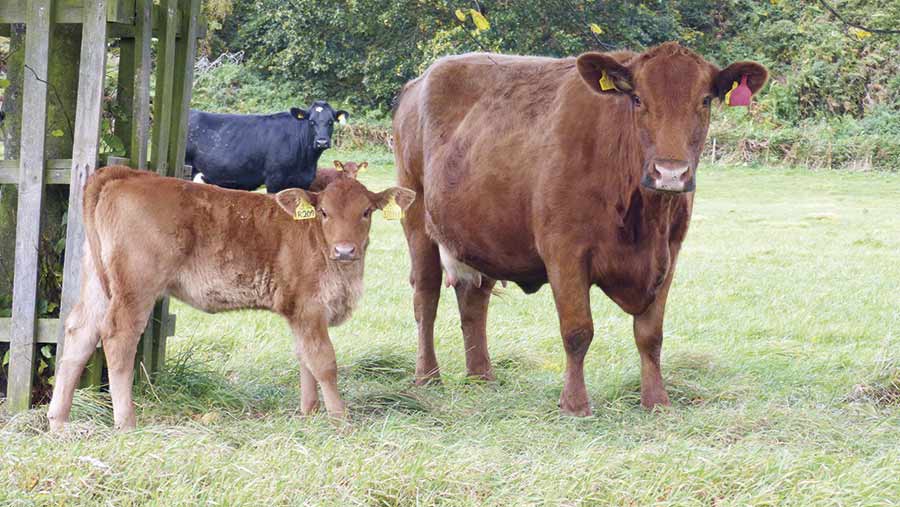 “There’s no issue with them fostering calves – you don’t have to skin them or use adopters like with sheep,” says Mr Naylor. “This is partly why we are rearing 93% as opposed to nearer 85%. We will look to cull out the cows that need to foster a twin as we go forward and increase culling pressure.”

Mastitis, temperament and caesareans have been the main culling faults up to now, but more focus will now be placed on stillborn and backwards calves.

“When I came here six years ago there were 1,000 cows, which was seriously understocked,” explains Mr Naylor. “It’s now a livestock estate with arable rather than the other way round.”

Yearling bulls are expected to bull 20-25 in their first year and then bull 50 cows a year after that for eight or nine years.

The estate periodically sells one or two bulls (£3,500-£5,000) and a couple of hundred breeding heifers each year.

Weaning efficiency is not a driving factor at Lilburn, where a human waste by-product ration is fed to bulls to grow them at 2kg a day to hit specification with ABP on a deadweight contract.

“Providing straw separately works for us,” says Mr Naylor. “We don’t chop and mix straw, we allow the finishing cattle to eat as much as they want as and when they need to.”

Bulls are weighed from around the 11-month mark to monitor weights and finishing times. The intensive finishing phase costing £275 a bull.

The beef operation is currently the most profitable enterprise on the estate and recently won the Glendale Agricultural Society large herd award for attention to detail on performance recording.

Feedlot manure is helping lift phosphate levels (along with burnt chicken manure), which has lifted soil phosphate indices from 0.4 to nearly 2 in the last five years. Lime and sulphur have lifted pH from 4.6 to 6-6.5 and are helping produce 15-16% crude protein grass silage.

Rapidly growing ryegrass (Westerwold) is drilled after spring forage pea silage in July, which is, in turn, grown in six to eight weeks and harvested at the end of September to then be followed with winter wheat.

Sandy, gravelly soils and light rainfall of 760-800mm/year allow lucerne to be grown as a break crop in the arable rotation to produce 19-21% crude protein silages with clovers.

Easy calving and maternal dam lines have served the beef operation well at Lilburn and the same approach is now being taken with the sheep, explains Mr Naylor.

Traditionally the estate has had hefted Lanark Blackface sheep at the top of a stratified sheep system but last year the farm bought Swaledales.

“I am trying to breed a hybrid by using Swaledale tups to increase the stretch, maternal ability and lambing ease of the hill sheep,” he adds.

“I’ve also bought shearling and one-crop Swaledale ewes from Alan Alderson. They are great sheep and I aim to develop a nucleus flock on some reclaimed moorland.

“Looking ahead, I think we need to control our costs and this means running more sheep and cattle to every labour unit. I believe that is the future of farming post Brexit.”