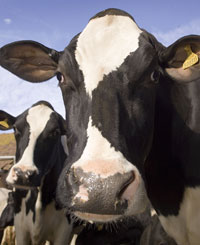 The number of fertility reports increased in October as the very poor summer came to its end. Much of the increase in reports was due to an increase in reports of non-detected oestrous which has been above the long-term average for the last six months

Another fertility problem which increased significantly in October was endometritis, which saw levels not seen since January 1997. Suggestions as to why this increase is so apparent would be greatly appreciated.

Monthly figures for endometritis reports by NADIS vets. Figures have been consistently above average since April.

The pattern for anoestrus has been similar to that for NDO, although overall the number of NDO reports so far this year has been around 13 times the number of anoestrus cases. Missed heat remains by far the most commonly reported reproductive problem, but the ratio of missed oestrus to anoestrus has fallen since its peak of over 16 in 2005 (see below). Interestingly this decrease has coincided with services such as the Heat time detection system discussed last month. Is this and similar services improving heat detection so that vets are less likely to be presented with normal cows with missed heats but still seeing those cows which are abnormal?

Vet 39 (N Yorkshire) reported two fertility problems in October. Firstly he described an ongoing problem with early embryonic loss, which has been going on since at least February. Several of the affected cows had recently been vaccinated against Bluetongue. On another farm he saw two heifers with segmental aplasia of the reproductive tract. Neither heifer had a cervix but both had two horns and two ovaries with secretion of mucus into the horns. The vet had already seen three heifers with immature vestigial reproductive tracts on the same farm earlier in the year these had been presented to him as not being seen in heat. Both of the October heifers were fathered by the same bought-in semen and he is going to check the pedigree of the other 3 heifers.

Overall, metabolic diseases remained well below average in October. The usual autumnal rise in cases of milk fever didn’t occur and the high level of hypomagnesaemia cases in September was followed by a fall in October – probably because October was cold and wet across the whole country. However there were still more outbreaks in October 2008 than in September and October of 2007.

The number of displaced abomasum reports increased slightly in October. As the graph below shows the pattern of reports for DAs has closely matched the average since 2002, except for the large delayed peak in May and a blip in August more data supporting the theory that high DA case numbers are here to stay.

Vet 06 (Lincolnshire) described an investigation of a farm with high incidence of acetonaemia and RDAs. Mid lactation cows were all OK as expected, while early lactation cows were slightly energy deficient. The main concern seems to be the dry cows were very energy deficient with severe acetonaemia and uraemia indicating that they are not being supplied with adequate energy. He commented that it is likely that, although the diet is okay on paper, competition for feed is the main problem

With most cows now housed, November is a good time to look back at lameness during the summer and assess how it’s been relative to previous years. Overall, adjusted for the changes in the NADIS reporting vets there have been fewer cases of lameness reported by NADIS vets this year than in all other years. The data certainly suggest that the long term trend in veterinary treatment of lameness is continuing to head downwards. Of the four main diseases it is digital dermatitis which is furthest away from the long-term average, both white line disease and sole ulcer relatively near their long-term average with foul actually being higher this year than last.

It is unlikely that these NADIS data reflect an actual reduction in lameness in the UK dairy cow recent research from the University of Bristol showed that even with a plan devised on our best understanding of lameness and the advice and support of experts it proved very difficult to reduce lameness because of poor farmer compliance with the plan. This study showed that perhaps the greatest barrier to improving lameness is not our knowledge of the disease but our ability to persuade people to follow suggestions. Perhaps that’s the area we should focus research on.

Footbathing is a commonly used method of lameness control however it’s not without its pitfalls. Vet 29 (Gloucester) visited a farm taking part in a lameness trial where cows went through a test footbath on the left feet only. Ten out of 180 cows had formalin burns even though the bath was only supposed to be 4% Formalin. If the levels were high enough to cause such problems it’s likely that they were also toxic to humans! Mixing up footbaths to the correct concentrations is not as easy as you may think as a recent Dutch study showed where 4% formalin ranged from 2 to 15%!

Vet 39 (N Yorkshire) reported an unusual problem in a group of about 40, 6-month old youngstock. This group had an outbreak of digital dermatitis and foul. One of the water troughs in their shed was leaking and there was a bog around it. The farm staff are going to turn the water off, lime around the other 2 water troughs, put extra straw down and footbath the heifers twice a week for the next fortnight and spray 6 or 8 of the worse affected ones next week

The number of toxic mastitis reports has now fallen for the fourth straight year. 2005 was the peak year but since then the number of reports has dropped by almost 50 cases per year. The question is why?!

Vet 39 (North Yorkshire) has a client who has had at least 8 cows fail the antibiotic residue test after calving. All of the cows had received a cloxacillin-based dry cow. Are there any other such problems out there at the moment?

Vet 46 (Yorkshire) has a herd using robotic milking that has been getting a lot of mastitis problems. The suggestion is that they have been getting a lot of transfer of infection via the clusters on the robots. A hot water and steam flush has now been installed so that each cluster is steam flushed after every cow. This does seem to be reducing the problem. The vet comments that it seems that the cold water flush works as long as you have a low level of infection but if problems build up then it doesn’t seem to cope very well. Hopefully the hot water and steam flush is going to keep on top of the job.

There has been some interesting discussion among the NADIS vets around downer cows. Vet 86 (Staffs), reported that he has noticed an increased number of downer cows in recent weeks, some but not all recently calved. Blood tests have been within the normal range and the only common factor he can identify is that the cows are on a lot of grass with clover. He asked whether other vets were seeing a similar increase in downer cows and if so what is causing it and how is it being treated

One vet in North-east England commented that he thinks that autumn is always the peak time of year for downer cows, because of the lack of control of the dry cow diet. However he had not seen anything similar to Vet 86’s description. The importance of autumn was also stressed by another vet from the North-east, who linked the increase in cases that he had seen to the long growing season producing grass with a relatively low mineral content, but again he had not seen anything similar to that described. In fact, none of the vets who reported seeing an increased number of downer cows also reported a high proportion of undiagnosed or non-responsive cases.

However we did get a similar though not identical report from North Wales. An 850 cow dairy herd where the dry cows were on a very lush pasture with a lot of clover had an exceptionally large number of milk fever cases, even though they were coming in twice a day to feed. A vet from Genus concluded that the small amount of grass the cows were getting could be tipping them into milk fever. The link between lush grass and hypocalcaemia is complex with high levels of calcium, low concentrations (and absorption) of magnesium, high intakes of potassium, and oxidative stress due to the high levels of polyunsaturates all playing a part.

Other pasture plants can also be linked to down cows. One NADIS vets reported that many years ago he saw high numbers of down cows (and sheep) due to chickweed in the field. This weed contains oxalate which binds calcium and just highlights how difficult milk fever control can be at pasture even if grass is only a relatively small part of the dry cow diet. However at present Vet 86’s problem does not seem to obviously be hypocalcaemia so further suggestions would be valuable.

Vet 82 (Thurso) reported seeing a lame steer with a swollen epiphysis that he suspects could be due to copper deficiency. Bony changes due to copper deficiency are much less commonly reported than ill-thrift or poor fertility, but in the individual animal can be catastrophic. In one herd under-feeding of copper in a group of pregnant heifers lead to pathological fractures of the humerus in the first two months after calving.

We continue to receive reports of clostridial disease in non-vaccinated stock. Vet 21 (Humberside) reported a case of bacillary haemoglobinuria in a Holstein bull that died suddenly. The rest of the bulls on this unit apart from 20 had all been vaccinated the affected bull had not been vaccinated as it was newly arrived onto the unit.

For enzootic pneumonia, October is usually the month where cases start to rise after the summer slump. However last month there was no such rise and outbreak numbers are still below where they were in May. This is reminiscent of the beginning of the year when levels were far below the expected winter peaks.

Comparison of reports of enzootic pneumonia in 2008 with long-term average showing that although reports in the summer were around average, reports at peak times have decreased markedly.

Vet 74 (Powys) did a caesarean on a Belgian Blue heifer here that the farmer had paid £6,500 for. The calf was born with contracted tendons in the hind legs, the with both back legs being hyper-extended at the fetlock. John has treated this surgically and wonders about the risk of this being hereditary.