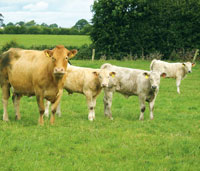 Signs which advise walkers what to do if they are walking with dogs near cattle have been unveiled by the NFU.

The signs, which have been produced by the union for its farmer members, give a clear reminder to walkers using public footpaths to keep dogs on leads but – importantly – to let them go if they’re being chased or feel threatened by cattle.

The yellow and black signs read: “Your dog can scare or harm farm animals – Keep it on a lead around livestock, but let go if chased by cattle.”

Over the past three months three people have been killed after walking in fields with stock.

In preparation for Bank Holiday the union has also joined forces with The Ramblers to remind people how they can enjoy the countryside safely.

“Farmers take care before placing livestock into fields, particularly those with a footpath, but equally the public should also be aware and must know what to do if cattle approach them,” said NFU Deputy President Meurig Raymond.

“That is why we support the advice of the Ramblers for walkers with dogs.”

The Ramblers has produced some simple advice that walkers can follow to minimise the risk of an accident happening.

Do
• Try not to get between cows and their calves
• Be prepared for cattle to react to your presence, especially if you have a dog with you
• Move quickly and quietly, and if possible walk around the herd
• Keep your dog close and under effective control on a lead
Don’t
• Don’t hang onto your dog. If you are threatened by cattle – let it go as the cattle will chase the dog.
• Don’t put yourself at risk. Find another way round the cattle and rejoin the footpath as soon as possible
• Don’t panic or run. Most cattle will stop before they reach you. If they follow just walk on quietly.

Tom Franklin, CEO of the Ramblers, said: “The British countryside is working land where animals graze in close proximity to walkers, which is why it’s such a pleasure to walk in. As with any working environment there are certain risks and it is untenable to remove all those risks from our surroundings.

“Incidents of people being attacked by cattle are few and far between, thankfully, and it would be counter to the interest of people who walk and farmers alike to see cattle closed off behind fences in fields. We urge people who walk not to let the very low risk of cattle attacks put them off enjoying the countryside when it is at its loveliest.”

NFU members can obtain their free dog warning sign by contacting their local group office or by ringing NFU CallFirst on 0870 854 8548.

Do you think this is a good idea? Are you happy with The Ramblers’ advice? Let us know.