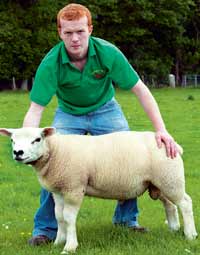 Like many other organic farmers, the Bennett family is trying to optimise the use of home-grown feeds on their Powys farm. When they started organic conversion at Upper Hall, Meifod, in the late 1990s the relationship between the cost of organic feed and milk price was favourable.

If the farm gate return had stayed at 35p/litre there would have been money to invest in herd expansion and a replacement for the dated 20:10 milking parlour, but in June this year it stood at 25p/litre.

At that time organic wheat was costing £180/t, in-conversion cereal £160/t and the partners were paying £578/t for organic soya.

“We will still have to go on buying organic protein, but this year for the first time we will harvest 28ha of cereals for crimping,” says Alan Bennett.

Wheat is also being grown to provide whole-crop silage to include in the total mixed ration fed to the 120 pedigree Holsteins in the family’s Plas Ucha herd.

Cows calve all year and the aim is to breed robust “middle of the road” replacements with the good legs and feet needed to exploit the farm’s excellent grazing potential, using a set-stocking system.

The herd average is 7000 litres a cow, which is produced from forage plus 1.3t of concentrate a head. “We have been surprised how well average yield has been maintained since organic conversion.”

Mr Bennett has also been surprised how well clover thrived as long as regular soil analysis was used to ensure phosphate and potash indexes were correct.

Effective sward management is important, as the family also sells organic lamb and breeding stock from a flock of 550 March and April-lambing registered Lleyn ewes. “Having tried most breeds we began keeping Lleyns in 1996. They last for years, are excellent foragers and their size means they have a low maintenance requirement.

“Ours usually scan at about 180%, there are few lambing problems and the ewes are first-class mothers.” About 30 rams were sold each year and the Plas Ucha flock had achieved a top price of 8500gns. At a Carlisle sale three rams averaged 5600gns a head. “We benefit because there are very few organic breeding animals reaching breed society sales.”

Mr Bennett, who farms in partnership with his wife Helen and his parents David and Audrey, says lambs not needed as replacements or not suitable for the breeding stock sales were finished and sold deadweight through Dunbia Organic Lamb. The sheep flock, beef cattle bred by putting a British Blue on the poorer dairy cows and dairy herd replacements grazed two units located four miles away, which were bought in 1983 and 1996, increasing the area of land farmed to 162ha.

When son Robert joined the business, and second son Hywel announced he wanted to join too when he left school, Alan Bennett decided extra income was must be generated.

One solution was to develop a 4ha organic vegetable enterprise producing potatoes, carrots, parsnips and beetroot for sale to local shops and through a company selling boxed vegetables.

“Helen, who has always worked on the farm, particularly at lambing, is now responsible for vegetable deliveries.” But the really large new enterprise invested in was an egg production unit, recently expanded to hold 30,000 birds, which cost between £20 and £25 a bird to establish.

The high cost of organic feed persuaded the partners not to go for organic eggs. Instead they produce premium-earning free-range brown eggs for Stonegate Farms in Wiltshire. Mr Bennett also has plans to co-operate with other egg producers to market branded eggs from Montgomeryshire and Denbighshire.