Obtaining pelvic measurements of heifers has alerted a Simmental and Charolais breeder to the potential dangers of the calving ease direct estimated breeding value (EBV).

The minimum requirement is for his 150-head commercial herd of Simmental cross Stabiliser cross South Devon cattle to calve a 37kg calf at two years old. He says he will be watching four of his commercial heifers and four of his Charolais heifers “very closely”. 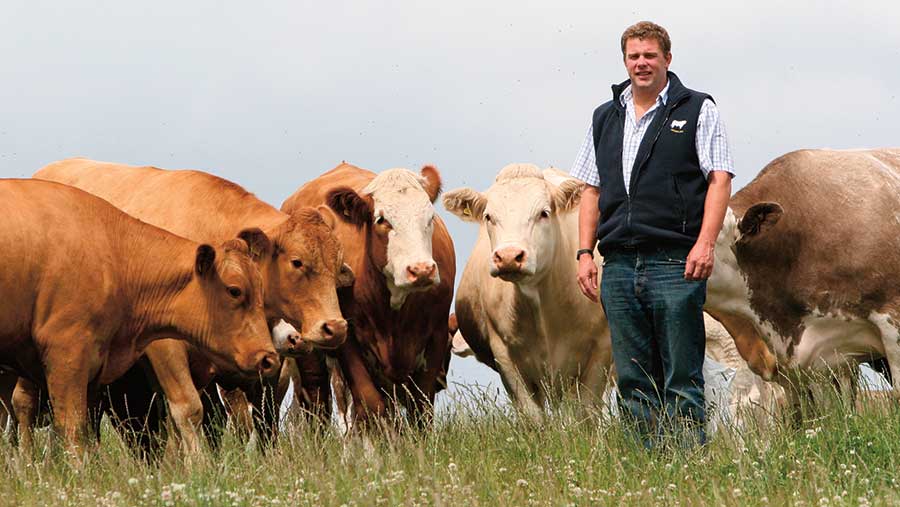 “I’m not as concerned about the pedigree animals with pelvises below 170 sq cm, as these calve at three years old,” explains Mr Ivory.

“These heifers have two or three generations of easy-calving sires in their lines and it is showing in their frame.

“I will still look at calving ease direct when making breeding decisions, but in a very different light.

“However, I didn’t cull anything on the back of the measurements, as I have nothing yet to benchmark against.”

Mr Ivory warns that while calving ease appears to be a helpful trait to aid bull selection on a terminal herd, systems aiming to use a closed herd or those with limited bull choice must be careful.

Along with new advice from Quality Meat Scotland, Mr Ivory warns that, while calving ease is suitable for terminal breeding, “continually selecting for easy-calving bulls could lead to smaller heifers being born that may not be easy calving themselves if used for breeding.” 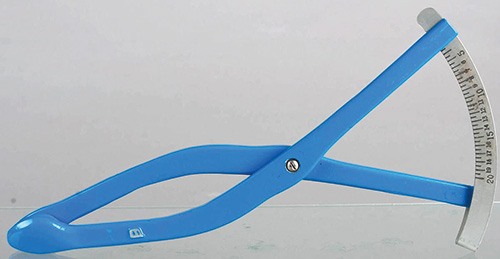 Furthermore, observations made while performing AI on young cows and heifers suggested pelvises were getting tighter. The suspected cause was breeding replacements from bulls rated positively for the calving ease direct EBV.

Once measurements were taken, dimensions of heifers were then cross-referenced back to the sire and calving-ease credentials were assessed.

This confirmed that, as far as breeding for replacements was concerned, calving ease direct was resulting in narrow heifers.

“If you are a purely using terminal bulls and heifers are fattened then this is no problem at all, but if you are keeping heifers for breeding, then I think you have to be aware,” stresses Mr Ivory, who requires 25 replacements heifers each year for his commercial herd.

A horizontal and vertical measure was obtained from yearling heifers in April this year.

Measuring took 20-30secs/heifer with the pelvimeter. Animals were restrained in a squeeze crush and averaged 500kg at the start of May.

The two dimensions were multiplied together and adjusted for a 365-day size to cater for growth from yearling to two years of age. Pelvimeter instructions advise 0.25sq cm/day.

Heifers age ranged from 397 days down to 337 days, with heifers selected born in the first eight weeks of a 10-week bulling period.

Size and shape of calves are two important factors that Mr Ivory knows play a big role in calving heifers, as well as the pelvic area of the dam.

He aims for a 40kg newborn calf, with the lighter end of the average being about 38kg, although he does very occasionally have cows calving 50kg calves.

However, Mr Ivory, along with veterinarians, stresses that calculations give a “ballpark figure” of future pelvic size, with the general advice being that pelvic measuring is a useful tool to minimise extremes.

“It is potentially a very useful technique that has been used in the US and elsewhere for many years.Over here some breeders are only just looking at its capabilities now,” explains Mr Richardson.

“Undertaken before breeding, the older the heifer can be before measuring, the more useful the measurement is as an indication of mature pelvic size.  The measuring is also less invasive for the heifer.”

He adds that pelvimeters are relatively simple to use and are available from veterinarians, although they may be replaced in the future with pelvic scanning and ultrasound.

Winter housing extends into the spring-calving block at Strathisla, where cows and calves can be monitored day and night. Easy calving is as much for cow productivity and the next calving as it is for labour.

“In my view it is the heifers or cows that don’t get back in calf that are often the ones that had something needed doing to them during or after calving – either a cleansing or a backwards calf.”

In terms of the “calving ease daughters” EBV, Mr Ivory does not pay much attention to this trait, instead looking at gestation length and calving ease on the maternal side. He also looks at fat depth, scrotal circumference and 400-day growth.

“I’m trying to keep things moderate and fairly consistent for breeding replacements,” he adds. “I am now looking to bull with a moderately positive direct easy calver one year and moderately negative one the following year, so calving ease stays around zero.”

A lack of labour – particularly skilled labour – on some beef units is making calving ease increasingly important, according to SAC beef and sheep specialist Gavin Hill.

He says the industry needs to be aware that how easy a cow will calve is about 75% down to management and 25% down to genetics.

Mr Hill recommends calving cows at a body condition score (BCS) of 2.5, or even slightly below, with there being scope to then build condition up to a score of about 3.

“I have seen a bull working away and calving quite easy for one farm’s spring-calving herd and then on a neighbour’s autumn-calving herd it can be more problematic,” explains Mr Hill.

“Autumn-calving herds with cows at plentiful summer pasture can become too fit as diets can’t be controlled in the same way as when cows are housed.”

And while he concedes small herds have to compromise with an “all-rounder”, AI can be used to access high-genetic-merit semen, open up options for breeding replacements and allow the stock bull to play a more terminal role.

“Average Scottish herd size is 52 cows, so a lot of people will have to pick an all-rounder. Something moderate is good and everybody is trying to find that curve-bender bull.”

Mr Hill notes many in the beef industry are becoming aware of the potential dangers of the calving ease direct EBV and that calving ease daughters is still “relatively new”.

“It is making for an interesting debate at the moment,” he adds. “A farm needs to decide for itself what is best and look for individual traits because, while an index or a beef value can rank animals, it is the individual traits that matters. Sifting through these and making decisions take time.”