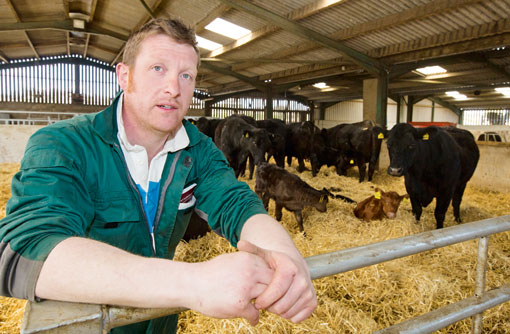 Breeding Aberdeen Angus cattle from a foundation of some of the world’s most renowned bloodlines is a far cry from large-scale commercial pig production.

However, Yorkshire farmer Ben Marsden, who sold his pig business last year to concentrate on breeding pedigree cattle, is already applying his wide experience of dealing with high-performance pig genetics to his new venture.

Last October, the Marsden family wound-up their pig business at Liley Farm, Penistone, near Sheffield. It was producing 22,000 weaners a year, but escalating production costs drove the decision to quit.

Every pig on the place was sold, but waiting in the wings was an expanding herd of pedigree Aberdeen Angus cattle. Other business options were considered, but the Aberdeen Angus enterprise was already being established and so it was time to go “full tilt” and develop a 100-cow herd based on cattle hand-picked from some of Scotland’s leading breeders.

“I’d been keeping pigs since I was a teenager, and the business had built up to 900 sows. But the constant increase in costs at every stage of production was unsustainable,” says Mr Marsden.

He admits that while getting out of pigs was a major decision, it was one that had been looming for some time, as pressure on profits mounted in all sectors of the industry.

Land the Marsdens had been renting out on their South Yorkshire upland farm was taken back in-hand, and in late 2010 the first seven Aberdeen Angus arrived.

“My grandfather was a dairy farmer and we’d had suckler cows, so it was good to get our own cattle back on the farm. But I’d decided it had to be a native breed,” says Mr Marsden. “Through the pigs I’d developed good business associations with several supermarkets, and I felt native-bred beef was an area of beef production that had a good future.”

But while a more commercially driven Aberdeen Angus venture may have been the original intention, the move out of pig production re-focussed the family’s involvement in their new enterprise and the decision was taken to make breeding pedigree Aberdeen Angus the main business, rather than producing finished cattle.

Mr Marsden set his sights high from the start and began establishing a pedigree herd based on the proven female lines that have underpinned the success of many of the greatest Scottish herds in the breed.

The new Liley herd will rely solely on breeding pedigree bulls and females for sale – both from home and from the prestigious breed sales at Stirling in February and October.

With the continued “wavering” of pig profits, Mr Marsden wasted no time in exploring the idea of developing a high-profile Aberdeen Angus herd, and his early enquiries took him to Scotland to meet the Elliot family who run the noted Rawburn herd near Kelso.

“John Elliot junior at Rawburn guided me and advised me, and we’ve founded the Liley herd on some of the great families that have been so successful at Rawburn,” he says. “By last autumn we’d expanded the herd to about 40 cows and we’d started a lot of ET work with embryos from America and Canada. So by the time we took the final decision to get out of pigs we were already moving forward with the cattle.”

But there has been rapid progress in recent months. This year should see the Liley herd calve 100 Aberdeen Angus cows – about 70 of which are pedigree. The ultimate aim is to build up to 100 pedigree cows to produce bulls and females for both the pedigree and commercial market.

“This is no hobby-herd. We’ve set this up as a business to replace the pigs and, while some may say the skills we need are different compared with commercial pig production, I actually believe we can bring a lot of what we learnt over the years with the pigs and apply it to the way we breed the cattle. And I’m convinced there’s a good opportunity for a top-flight Aberdeen Angus herd south of the border,” he says.

Mr Marsden believes the way he managed the pigs will play a big part in the performance priorities they set for the cattle.

“Using genetic values to influence breeding performance is something we’ve always been involved with, and we’re convinced we can use that experience to help us produce cattle with high-ranking terminal sire and maternal traits. Bull buyers make more of their decisions based on performance figures and breeding traits, and that’s a trend that will continue.”

Recording feed conversion ratios, growth rates and meticulous daily monitoring of inputs and performance is already an integral part of the management strategy within the Liley herd’s breeding programme.

“We intend to go the extra mile in terms of the performance data we collect. We already weigh all bulls every month, calculate daily liveweight gains, daily intakes and the cost of feeding each bull a day.

“If we want to sell bulls to commercial beef producers these are the hard facts on costs they want to know. In the pig sector we’ve been brought up with this attitude to costs and high performance and we want to apply it to the cattle.”

With this attitude to providing buyers with the most relevant performance data, Mr Marsden believes the Aberdeen Angus will widen its appeal even further.

“The breed has a reputation for its ability to grow and finish off grass, but I don’t think that should limit its market. There are finishers who want performance from a more intensive system and these cattle can do that.

“If we can show Aberdeen Angus cattle can match any of the continentals on feed conversion rates, the breed will see a big expansion in its market among the big producers relying on intensive finishing.”

And while high health status herds may be relatively new to the cattle sector, they have long been part and parcel of the pig industry. The Liley herd is determined to meet the most exacting standards on health.

“Biosecurity is also going to become evermore important to all livestock sectors, and that’s something we’ve always been strict about in the pig business and we’ll be applying the same standards to the cattle,” he says.

Mr Marsden is sure of one thing – he likes big cattle. “We want some power and scale, that’s the type of Aberdeen Angus cattle we like and that’s what we’re aiming to produce. I think there needs to be a common-sense approach to calving ease too; yes everyone wants a live, viable calf, but as a breed we’ve got to be careful that ease of calving doesn’t take us down the route of increasingly small calves.”

The Liley herd’s calving records over the past four years show only one caesarean and less than five assisted calvings.

Among the top cows at Liley is the 24,000gns Rawburn Edith K180 bought at Stirling. Sires used in the herd so far include Rawburn Elysium F547, Rawburn Double Oseven J985, Lockerley Legolas G850 and Oakchurch Field Marshall K143. The stock bull at Liley is Lockerley Kougar, a past winner of the breed championship at Perth.

Herd promotion is high on the agenda for the business, and this year will see the Liley show team in full sail attending all the major shows. But there is even greater expansion on the horizon that could see an additional 100-cow pedigree herd established to produce top-quality finished beef cattle.

“At the moment the priority is to develop the pedigree herd using the best genetics we can,” says Mr Marsden. “I’m still looking at herds with the intention of further strengthening our foundation with new bloodlines and families. But I’m a member of Beeflink and have a good relationship with ABP, so we may well decide to move into producing finished cattle at some stage in the future.”

Keep up to date with the latest on Livestock 2013