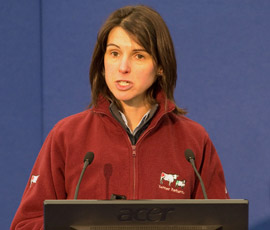 Beef producers failing to address fertility issues in their herds could be missing out on thousands.

This was as a result of the first herd having six additional calves to sell, with an increased weaning weight of 23kg, explained Dr Mary Vickers, senior beef and sheep scientist at EBLEX.

She added: “It’s a significant financial reward for better levels of fertility.”

“It gives females longer to recover before they go in with the bull again,” which she said “in itself” helped improved fertility rates.

Dr Vickers said farmers should be aiming for a bulling period of nine weeks for cows and six weeks for heifers.

She says the reason for a shorter bulling period for heifers is to ensure the heifers coming into the herd are very fertile.

Vet Colin Penny said ideally heifers should be growing at 0.90kg a day to meet the challenge calving at two years of age presents.

He said bull fertility was an integral part of a profitable herd and one area which is often neglected by farmers.

“Bulls can be the weak link in the chain. This is the bit that’s been neglected for a long time. It’s assumed they will just do the job, but there are a lot of bulls out there that are sub-fertile.

“Prevention is better than cure. You should be doing breed soundness checks and make sure you observe you bulls during the mating period.”