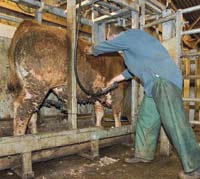 The NFU‘s livestock board has issued a survey looking at the extent to which members are putting themselves at risk by clipping themselves.

Board chairman Alistair Mackintosh said he was aware that the practice has resulted in some serious injuries. He called on farmers to help the NFU gather hard evidence.

“However, due to adverse weather conditions or a shortage of bedding materials, there are times when cattle need to be clipped.

“We know this is a serious problem for our members but we need to build some proper evidence if we are to tackle this issue.

“Ideally, we would like to see more abattoirs provide a postmortem clipping service. Not every animal will require clipping but when the need arises it would be much easier for an abattoir to do it after slaughter. This would also negate any health and safety issues associated with clipping on farm.”

A spokesman for NFU Scotland said the union had been asking members to fill out clipping injury reports since 1996.

About 60 or 70 had done so and some of the injuries they had reported were quite severe.

“We have been working hard to persuade abattoirs and the Food Standards Agency to move towards online clipping where the animal is clipped postmortem,” said the spokesman.

The union had visited plants in the US and Ireland where this happened and farmers were prepared to pay for the service.

“There has been a trial at ABP in Perth [and Shrewsbury] and we are hopeful that the online clipping will become a permanent part of that line,” he added.