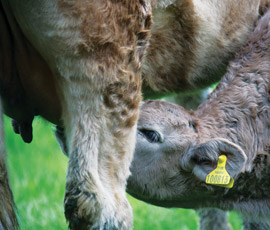 Plans to eradicate bovine viral diarrhoea (BVD) in Scotland with the launch of a database could save the Scottish cattle industry £50-80m over the next 10 years.

The database, which forms part of the ScotEID project allows farmers to view the BVD status results for their own herd and for each animal that has been tested. Eligible vets will also be able to change a herd status once control measures have been taken to eradicate BVD from affected cattle.

“BVD eradication can improve herd health and reduce vet bills and the database has an important role to play in this. Eradication of the disease could result in a saving of about £16,000 per annum to the average dairy farm and £2,000 to other cattle farms,” he said.

About 40% of Scottish herds now show signs of exposure to the disease, with about 1% of calves born in Scotland thought to be persistently infected (PI). The disease  can cause abortion, infertility, failure to thrive and often death.