DESPITE A concerted effort by exhibitors from both the south and across the Irish Sea, the Scots had it pretty much their own way at last week’s Highland show picking up all three interbreed tickets.

Among the beef cattle Limousin breeders and feeders were to the fore in every interbreed catergory, picking up the overall interbreed, the interbreed team title, the junior interbreed award and the commercial beef championship.

Leading the way for the breed was the imported French bull Samy from Robert Graham’s Bridge of Allan-based Grahams herd. Having picked up the breed award at last year’s Highland, Samy, led out by stockman Ian Anderson, went one better this year to take the overall title. 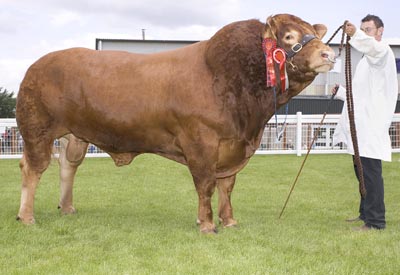 Samy, whose dam Nova is by Jersey, the sire of Mr Graham’s world record priced bull Samson, was described by judge Terry Coghill as exactly the sort of bull he’d like to take home to Orkney. “He has power, mobility and superb muscling, you could want no more from a bull.” 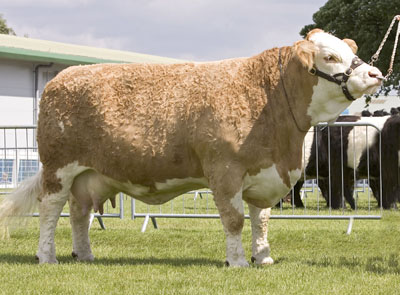 Simmental champion was Darshams Kit Kat from Paul Clements’ Darshams herd,
lead out by Jimmy McMillan Kit Kat was building on her
succesful show career with another breed championship.

Meanwhile, both the Charolais and Simmental breed championships were taken by members of the McMillan family. Jimmy McMillan senior brought out his homebred heifer Dunesk Unesta to take the Charolais title, while Jimmy McMillan junior took the Simmental title with the ever-successful cow Darshams Kit Kat from Paul Clements’ Stowmarket, Suffolk-based Darshams herd. 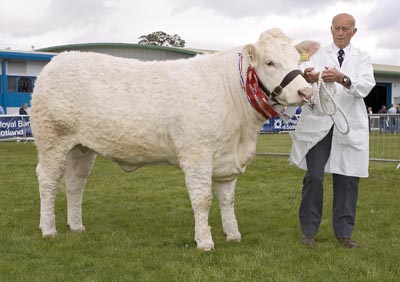 Charolais leader was this heifer from Jimmy McMillan senior.
This year’s show was Mr McMillan’s first time showing at the Highland
in his own name since his Young Farmer days.

Among the sheep lines it was a first interbreed win with a Texel for John Forsyth. Taking the ticket in the hands of Glenside flock shepherd Geoff Aiken was a homebred shearling ewe by the 120,000gns tup Loosebeare Imp and out of a ewe by Muiresk Glenfiddich. 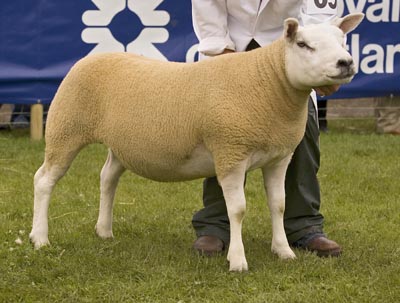 Reserve spot was claimed by Co Antrim-based Sam Smyth’s Rouge De L’Ouest shearling ram which was bought last year at Dungannon for 980gns from Jane Pollock. Interbreed judge Tom Laird described both sheep as tremendous examples of their breeds. “I can envisage progeny of both these animals hanging up in abattoirs and they would be exactly what the market wants.” 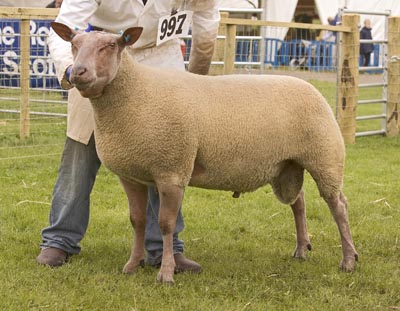 Reserve spot in the sheep lines went to the Rouge
champion from Co Antrim-based Sam Smyth.

The interbreed pairs championship was taken by the Suffolks of Anne Hutchon and John Sinnett, with the Blackface pair standing reserve.

In the dairy lines it was a win for Balfron, Glasgow-based Robert Steel with the imported Canadian fourth calver Altona Lee Rudolph Summer. Imported from Canada as a calf Summer gave 10,852 litres in her last lactation at 3.31% protein and 4.21% butterfat.

Meanwhile, both the junior interbreed and dairy team championships were also taken by the Holsteins, with Brian Yates’ cow Logan Outside Roxy taking the junior title ahead of Robert Hunter’s Jersey cow Clydevalley Jude Luita.