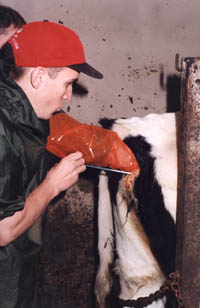 Sexed semen – it’s a phrase better associated with the dairy industry, but should it be? Sarah Trickett speaks to one Scottish suckler producer benefiting from this technology

Artificial insemination, let alone use of sexed semen, isn’t something widely practiced in the UK beef industry. But for Aberdeenshire suckler producer Neil Barclay a move to using sexed semen was brought about as part of a drive for genetic progress.

Prior to using sexed semen two years ago, Mr Barclay was buying replacement heifers from various markets – which, he says, was slowing down progress and costing money.

“With replacement premium heifers costing up to £1400 each, we didn’t think it was viable. And because quality was so variable it was costing us money and time having to attend various sales to obtain the quality animals we required as, in many cases, we often returned empty handed.”

For this reason, Mr Barclay took the decision to look at breeding his own replacements.

“We decided to invest money and buy two of the best bulls possible to breed from: the Simmental bull Samark Superman, which cost us 10,000gns; and what we believe to be one of the best Saler bulls, Whitebog Convener, at 7500gns.”

Mr Barclay says he selected the bulls not only on visual inspection but also EBVs, with milk and calving ease two of the most important traits selected for.

“By having our own bulls it means we have selected the traits we most wish to carry through our herd. The top 50% of cows are also selected for milking and breeding ability.”

And by using female sexed semen on the top 50% of breeding cows, which consists of a mix of Simmental, Angus, Limousin and Belgian Blue he is able to produce premium heifer replacements at a lower cost. “By using female sexed semen we are producing a larger number of quality heifers in a shorter period which also speeds up genetic progress. In future we also plan to start selling extra heifers, which will bring in an additional income,” he says.

The one drawback many beef producers may think sexed semen has is heat detection and the ability to get cows in calf. However, as Mr Barclay explains, it is relatively simple and can bring additional benefits.

“Heat detection isn’t a problem as we synchronise the top 50% of cows we wish to breed from using a PRID {a progesterone-releasing intravaginal device]. Cows then come on heat at the same time and are all AI’d using female sexed semen on the same day. We have found no difference in conception rates either,” he says.

By doing this, Mr Barclay says, he is able to produce more even batches of calves at the same age, with the calving period also tightening up with cows now calving within seven to 10 days. “This allows us to focus our efforts on the time of calving and also makes feeding easier as all cows and calves are at the same stage.”

And with UK bull stud Cogent sexing the semen from Samark Superman and Whitebog Convener, Mr Barclay is able to generate yet another additional income. “We are now selling sexed semen from both bulls as well as using it in our herd.”

However, with just two bulls on farm, the gene pool for replacements is naturally limited. “We are already looking at what bulls to breed from in the future and have already bought another young Simmental bull in Ireland,” says Mr Barclay. “We are regularly on the look out for bulls with traits we require.

He adds: “Using female sexed semen is definitely cost effective because we are producing a larger number of premium females in a shorter timescale. This is the fastest and cheapest way to improve our breeding herd.”