When a new owner took on the Linley estate and announced that he wanted to go organic, Shropshire beef farmer James Evans admits he was filled with trepidation.

His main concern initially was that he would be forced to dramatically destock to meet the conditions of his contract farming agreement.

Fast-forward three years and he is fully embracing the challenge of transforming his 180-spring calving unit at Partridge Farm, near Bishops Castle.

In fact, the fortuitous timing could not have been more opportune with Brexit looming, he concedes.

“I had my system and I thought it was working quite well,” the Farmers Weekly 2012 Beef farmer of the year explains.

“But once the decision to move to organic had been made, it concentrated the mind to look at things differently.” 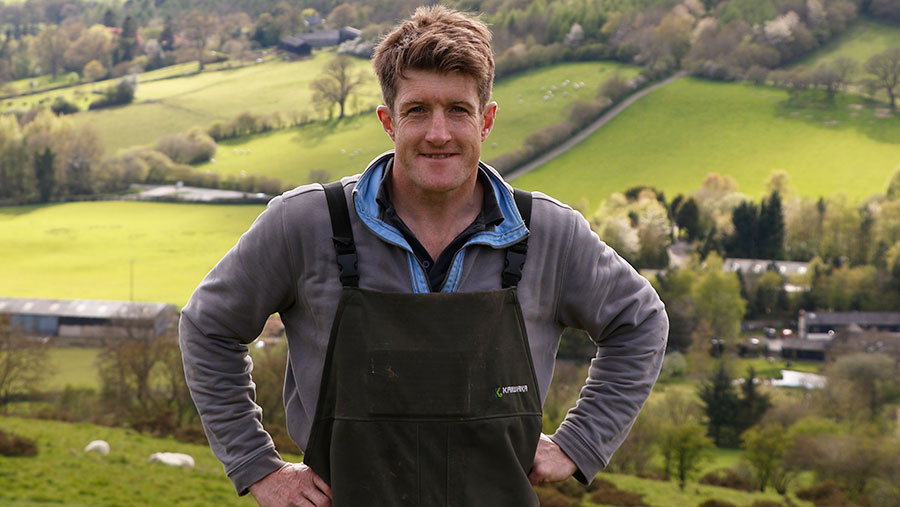 The transition to organic has so far seen ewe numbers reduced from 1,000 to 500 to give the new system some “breathing space” and enable Mr Evans to test the farm’s grass growth capabilities without fertiliser.

To facilitate the conversion, a 28ha arable block has been re-seeded with herbal leys and white clover to provide a new rotational grazing platform, leaving just 40ha of arable for growing winter wheat, oats and wholecrop if winter forage stocks run low.

The farm originally had only 34 defined fields, which would have severely limited grazing management, but the new platform has boosted the number of paddocks to 77 to help overcome this.

Field boundaries have been formed on the grazing platform with two-wire electric fences, and mobile water troughs have been installed above ground, with design and installation carried out by Precision Grazing.

Temporary electric fences are used to create paddocks, which provides the flexibility to adjust paddock sizes or the time animals spend in a paddock. 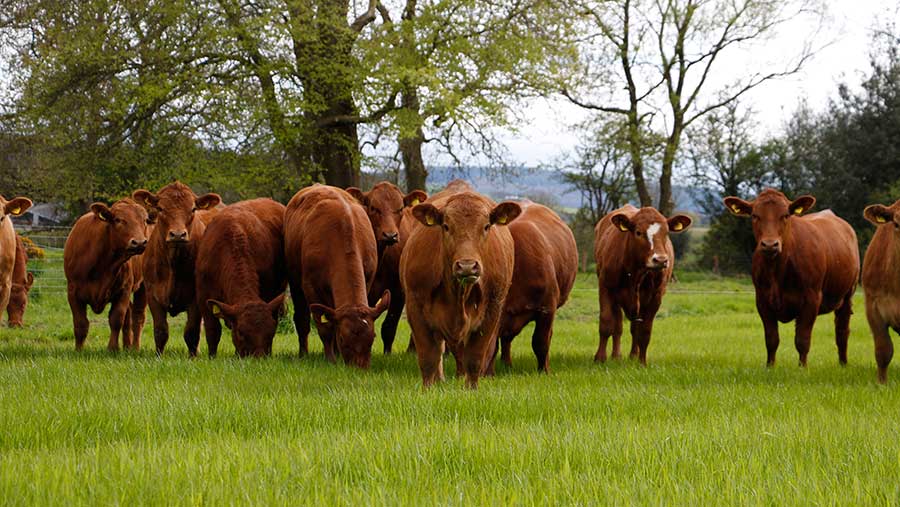 Flexibility is key to the system, says Mr Evans, who explains that grazing beef can be more complex in comparison to dairy because of the number of groups that need to be run.

“The big difference with grazing beef cattle is that you are limited to the number of bulling groups; 40-45 is pretty much one bulling group.”

The testing terrain of some of the land, with the farm also in HSL agreement, means only 162ha are effective to graze. This exacerbates grazing complexity so Mr Evans is having to maximise output by using high stocking densities and more regular shifts of 2-3 days on the productive areas.

James Daniel from Precision Grazing, who has been advising Mr Evans, adds: “This year our focus is on pasture measurement to establish a base level of output under this improved grazing management. This will enable us to set a five-year plan for the business.”

Due to the spring conditions, average farm cover was well below target of 2,000kg DM/ha in March and April, recording 1,651-1,842kg DM/ha, respectively.

To bridge the feed deficit, silage was fed to ewes, cows remained housed and only 40 out of 80 yearling heifers were turned out. These went on to fields with the highest covers, moving every 1-2 days to minimise ground damage.

If ever there was a time to test the system, it has been this year, says Mr Evans.

“The weather has been awful. You question your own sanity: ‘It’s wet, cows should be inside; what am I doing?’”

However, he concedes it has made him realise just how resilient grass is, and he says he now values permanent pasture much more when turning cattle out early because of its ability to repair itself.

“We had cattle out on the 14 March and it rained and rained. By the time we got to the fourth paddock the field was like a mud bath. I questioned the system, but one month later that paddock had recovered and was ready to graze again.

“It’s been an eye opener and you have to be brave. Grazed grass grows grass. It is a weird concept.”

But with farm cover now on target and growth above demand, 55ha is being removed from the farm’s total grazing area for silage.

All stock has been turned out to grass and split into 14 groups. Cattle make eight of these, and are stocked in groups of up to 50 head, with ewes and lambs making up the rest.

The aim now is to target the best pasture on the platform to priority stock such as first-calved heifers and ewes and lambs.

Mixed aged cows in good condition are being grazed up on improved hill ground and permanent pasture, which climbs to 1,250ft.

Calving usually starts on 1 April but Mr Evans plans to bring this forward by 1-2 weeks to best match demand with grass growth. This should help to maximise calf growth and stocking density on the platform.

The plan is for cows to be transitioned on to grass prior to calving and then moved into groups with their calves post-calving.

But the biggest change to Mr Evan’s enterprise will see him move away from intensively finishing bulls at 12 months.

“That’s going to cease because 70% of the diet has to be forage and I want to reduce concentrate usage so a steer system would be better suited.”

Instead, bulls not kept for breeding will be castrated and finished off grass between 16-18 months of age.

Mr Evans currently sells bulls direct to Woodheads but he is going to try to develop new markets selling direct to restaurants and butchers to add value.

A large part of business is generated selling breeding bulls and heifers within the top 10-20% of the herd and this will continue. In fact, Mr Evans believes he can capitalise on the forage-fed-only story.

“Our whole ethos is to produce Stabiliser breeding stock so if we can produce stock that has been bred purely off forage it will benefit us and our customers.

“This will grow bulls more naturally which will benefit them from a fertility point of view and structurally.”

To increase profitability Mr Evans says he is going to reduce mature cow size from 646kg to 600kg by weighing stock and selecting bulls and heifers that have a lower mature weight.

The grazing infrastructure and support has cost about £15,000 but that will pay for itself in less than two years, Mr Evans reckons.

Obviously breeding stock fetches a premium above this and therefore the payback should be quicker, he adds.

Mr Evans is quietly confident this move will set the business up for the unpredictable territory that lies ahead.

And contrary to his worries of having to decrease production, by sub-dividing fields to mitigate the loss of fertiliser, Mr Evans believes he will be able to lift stocking rates in the near future.

“Hopefully we will get the best of both worlds. It will enhance my business and my farm. It’s got to stack up in every way. There are people that chose to go organic as a lifestyle choice but this is a business choice as well.

“If we can reduce our fixed costs there’s actually a good margin to be made out of beef.

“I want to try and achieve a highly profitable farming model, farming organically and sustainably, that keeps all parties of our farming agreement happy and I think it can be done.”

James Evans is one of three host farmers at the National Beef Association’s Beef Expo farm tours on Thursday 24 May ahead of the Beef Expo.

The Beef Expo will take place the next day (25 May) at Halls Auction Mart, Shrewsbury, where the National Commercial Cattle Show will kick off the show season. There will also be 120 trade stands, demonstrations and technical seminars and debates.