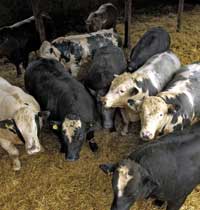 Beef farmers finishing suckler-bred bulls on ad-lib concentrate diets with low levels of silage could greatly cut costs without hindering growth rates or carcass quality, by replacing up to half of concentrate inputs with high-quality grass silage.

Research by Francis Lively at the Agri-Food and Biosciences Institute, Hillsborough, Northern Ireland, found that Continental bred bulls fed a ration of 50% concentrate and 50% high quality grass silage were £70/head cheaper to finish.

“Bulls fed the 50:50 ration had an increased margin over feed of £54/head compared to their ad-lib fed counterparts and diet type had no effect on meat quality attributes when assessed by lean colour or tenderness,” said Dr Lively.

But, while bulls fed ad-lib concentrate had improved carcass weights, they only yielded an average of 7kg/carcass more than their 50:50 fed counterparts, says Dr Lively. “Replacing 50% of a high concentrate diet with high quality grass silage is a viable option to reduce production costs and increase margin over feed costs when finishing suckler bred bulls.”

The same study also compared the effects of increasing carcass weights of bulls and found that taking bulls to 800kg liveweight resulted in no reduction in daily live weight gain, although feed conversion did slip from 8.9kg:1 to 9.6kg:1. “But even at the heavier weight this is an excellent feed conversion rate and clearly illustrates that these suckler bred bulls can be taken to heavier weights efficiently.

“Additionally, increasing slaughter weight from 500kg to 800kg resulted in an improvement in carcass grade by 0.5 of a grade on average and more bulls classified at fat class 3 rather than fat class 2. However, there was a tendency for some bulls grading in fat class 4H at the heavier weight.”

Overall, while the heavier bulls required increased feed due to the longer finishing period and poorer feed conversion, they also produced better conformed carcasses leading to higher carcass values. “This resulted in a £68 higher margin over feed costs for the 800kg bulls. But no penalty for heavy carcasses was included in these figures and producers should ensure they have a market for heavy bulls before considering a change of production,” adds Dr Lively.

“Dark cutting beef is generally caused by stress around time of slaughter, with mixing of unfamiliar animals leading to fighting and mounting behaviour, possibly exacerbated by the fatigue of transport.”

To prevent problems, Dr Matthews says it is crucial to minimise mixing of bulls from different groups in the two weeks before slaughter. “Where possible bulls should be reared in large groups of 40 or more to ensure there are sufficient animals in a group to be drafted for slaughter with the least possible need for mixed consignments.

“When regrouping becomes necessary, this should be done at least two weeks prior to slaughter and when an individual bull has to be removed from a pen and separated for a time they should never be returned to the original group. Instead put these bulls into a group of younger, smaller animals where the size difference will prevent bullying of the single bull,” he adds.