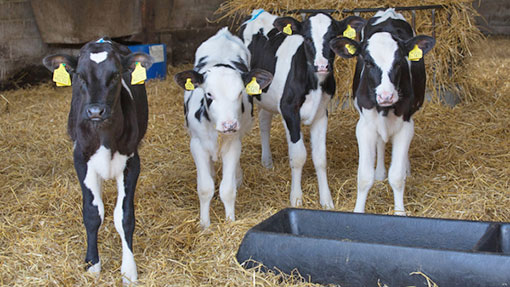 As winter approaches, getting youngstock housing right is essential to prevent growth checks and increased risk of respiratory disease.

Farmers preparing calf accommodation in the coming weeks should focus on animal health and productivity to maximise margins.

Jamie Robertson, honorary research fellow with the School of Biological Science at the University of Aberdeen, says he cannot understand why dairy calves not are not treated as well as dairy cows.

“This is the only production system where the young are not looked after. We know what a calf needs, we can put numbers to these things, but we need to start from day one,” he says.

1. Temperature – Pay attention to it

“If you don’t, you’re missing a trick; it’s money in your pocket,” says Mr Robertson.

2. Housing – Designs won’t cost the earth but need to be intelligent

“If hygiene is the most important thing for a young animal, why do we put calves into buildings that aren’t cleanable?” asks Mr Robertson.

“You won’t beat calf pneumonia until you get better control of moisture. It’s not difficult – bugs like moisture,” says Mr Robertson.

“A building must ventilate even when the wind isn’t blowing,” says Mr Robertson.

“The calf house is the coldest as they produce the least heat. I am highly critical of high-volume buildings, put them in a small, well-ventilated box,” says Mr Robertson.

6. Energy conservation or addition – know your climate and their needs

“There are 10,000 calf jackets out there, I’m confident there’ll be another 20,000 this winter. It’s a little thing, but it helps conserve energy,” said Mr Robertson.

“Let’s be precise, get the knowledge, know you’re environment and be like everyone else,” he concluded.