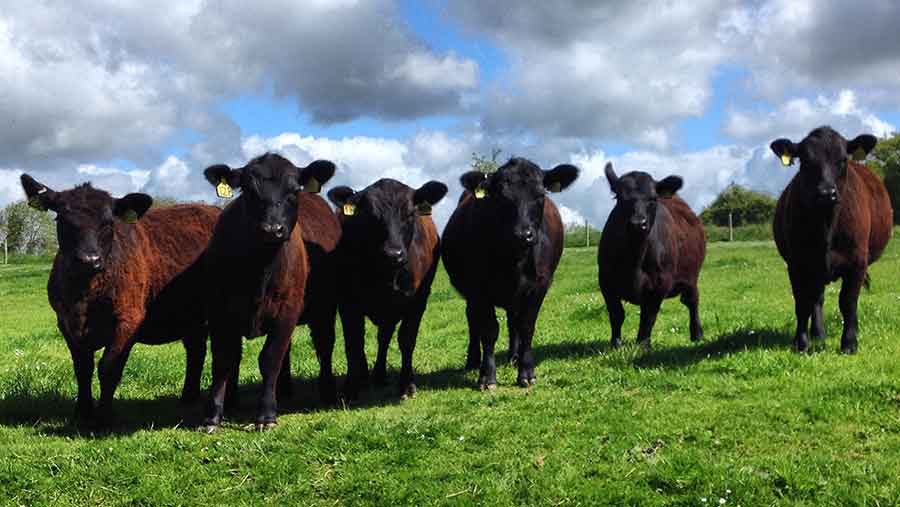 Thinking smaller is unusual in farming, but a livestock business in Dorset has done just that by developing one of the smallest beef breeds to Britain.

Farm manager David Maughan has worked with most of the large continental and traditional beef breeds over the last 36 years and has seen cattle size increase dramatically.

He believes beef cattle breeds are getting larger and becoming more dependent on costly concentrates for finishing.

“It raises the question, is it sustainable to keep breeding larger animals which are more reliant on cereal-based finishing diets?” he says.

Farm owner Geoff Roper started the herd with animals from Edmonton, Canada, in 2010.

While the breed is uncommon in the UK, Mr Maughan is quick to point out it is not a “rare breed”.

Numbers may be low, but they are increasing, he says.

“Lowlines are a modern, commercial beef breed developed for high muscle-to-bone ratio from a much smaller carcass. They are not a ‘miniature’ breed and do not carry the dwarfism gene.”

He believes the breed could eventually play a substantial role in making beef production more sustainable and less exposed to volatile prices for cereal-based feeds when used as a terminal sire.

“I have seen pure-bred cows from conventional breeds with liveweights of 980kg. The feed and energy that is required to sustain that animal is expensive and difficult to justify,” says Mr Maughan. 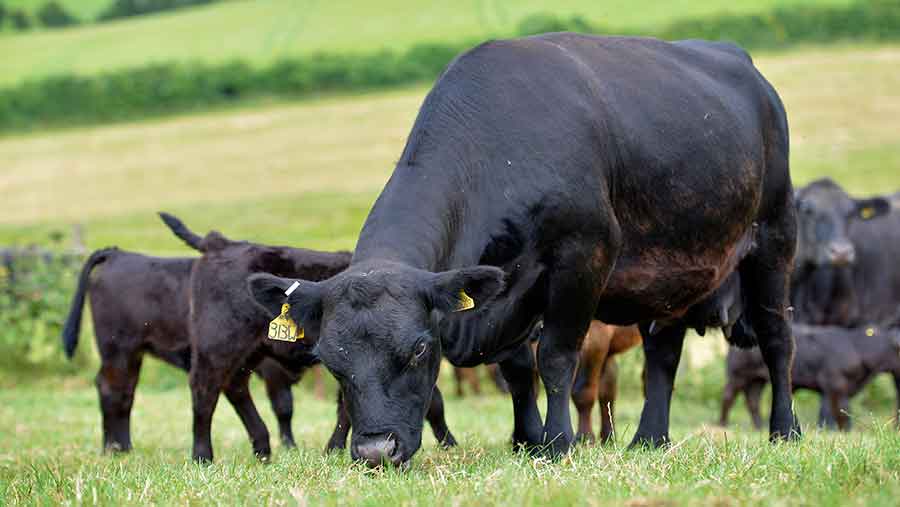 But it is the muscle-to-bone ratio that allows the Lowline to stack up commercially against its larger counterparts.

“Our meat to bone ratio is 72-77% and killing out percentage up to 67%. The stocking rates are also much higher for Lowline cattle,” he says.

“While larger breeds of cattle will almost always resort to using concentrates we can finish off grass so the cost of producing the beef is also far lower.”

Grassland is intensively managed under a New Zealand-style paddock grazing system stocking at 6.7/head plus calves a ha.

What is a Lowline?

The breed is 100% Aberdeen Angus developed by the Australian Trangie research station which compared feed intakes and muscle-to-bone ratio in large and small cattle.

They began a trial in 1974 and referred to the large animals as the high-line group and the small animals as low lines.

Fifteen years later the low-line group had been bred 30% smaller. The results showed that it was possible to stock the smaller animals at higher rates and, with a superior killing out percentage, yield more beef per acre.

A group of farmers persuaded the research station to release the genetics and the Australian Lowline Cattle Association was formed in 1992.

“Stock are kept on the grass until it is eaten down. Then we move them on, harrow and top the field to get it going again,” Mr Maughan explains.

The breed is very hardy and the cattle will happily outwinter.

“Lowlines were developed in Australia but have become popular in Canada where they can live outside in extremely cold temperatures,” he adds.

See also: Why the Luing breed is a hit with beef farmers

“In North America, they have been trying to cut back on cattle size and are putting Lowlines to larger stock such as Aberdeen Angus.

“The result is the offspring are a third smaller. The genetic trait for size is so strong in the Lowline that this can be done in a single cross,” he says.

“Our own programme is based on pure breeding and we select for length, muscle depth conformation, locomotion and calving ease. We also feel that it’s important that our cattle hold an elite health status and as such they are accredited for IBR, BVD, Lepto, Neospora and Johne’s grade 1.”

Calving ease is helped further at the farm, which uses low birth weight bulls on younger heifers. For the older cows, larger and more mature bulls are selected. 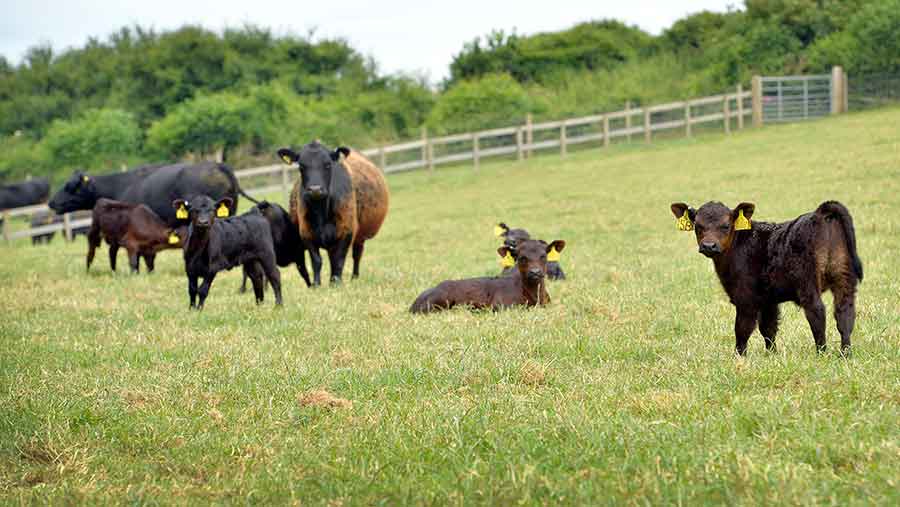 Bulls are sold – at any stage from weaned through to mature – for breeding to make way for replacement male lines to keep genetics fresh.

The bulls are still maturing at five years so final weights can exceed 660kg and 116cm height.

The herd contains genetics from Australia, Canada and America, but with the breed still in its early days in the UK, the farm holds semen straws from top bloodlines in Australia to introduce fresh genetics.

This has resulted in extremely high fertility performance at 90% conception rate at first service. Bulling heifers are synchronised at 14 months and put to the bull in July.

“If something misses the first time around we get her on the second cycle and our calving percentage is 97%.”

The main calving period is in March to early April and is usually stress-free.

“I have only had to intervene twice for a couple of breaches in the past three years,” he says.

The knock on benefit of stress-free, injury-free calving is the cows come back into bulling very quickly. The breed also has another desirable trait which makes it a useful option as a dairy cross – its gestation period is 271 days, 10-14 days shorter than most beef breeds.

“That adds up to a lot of extra milk for each cow so we are taking a lot of calls from interested milk producers.

“For beef production we have found the calves are vigorous growers,” he says, with birth weights at between 18-25kg and weaned calves at 210 days averaging 180kg.

“We are very selective in what we keep for breeding and anything we feel doesn’t make the grade for breeding will go for beef.

“The target is not to push the beef animals. They finish naturally, rearing them to 450kg liveweight at just under 30 months.”

The business’s main aim is to sell stock within Europe where it has already found customers and has a number of serious inquiries. It sells starter herds and has exported to several countries. The popularity is growing fast.

“We promote the breed on the show circuit and the interest is strong,” Mr Maughan says.