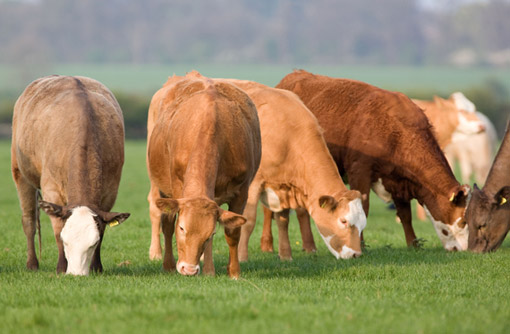 With farmers increasingly having to cope with all extremes of weather in a year, Tim Kerridge from DLF Trifolium said festulolium grasses could have a valuable role to play on farm.

Although they were originally marketed as drought-tolerant varieties when a lack of rain caused issues for farmers a few years ago, Mr Kerridge said they were better viewed as “stress tolerant”.

“More farmers should look at festulolium,” he said. “They are deep rooted and will perform well in any extreme of weather.”

Festulolium are a cross between a fescue and ryegrass and can have different characteristics depending on the variety type.

“If I was a farmer, my mission would be to produce as much home-grown forage as possible and grow a complete diet.”
David Randhian, DLF Trifolium

Some festulolium acts like tall fescues and have extreme weather tolerance, but low quality and reduced palatability. Others act like an Italian ryegrass, giving a similar feed quality, but with improved stress tolerance.

“The big advantage of the Italian type is increased persistency,” explained Mr Kerridge as part of a forage and feeding seminar. “They will last two-three years rather than one-two years with a straight Italian ryegrass.”

He suggests incorporating Italian type festulolium into a mix with conventional Italian ryegrass or red clover, and strip grazing or cutting fields.

“The most important festulolium is an advanced hybrid. These act like a hybrid ryegrass and can last up to six years,” explained Mr Kerridge. “I believe hybrid and Italian festulolium could take 25% of the short term Italian and hybrid market in the future.”

However, in the meantime farmers facing a forage shortage thanks to months of weather extremes, should consider turning to brassicas to fill a feed hole.

David Randhian, expert in alternative crops and forage for DLF Trifolium, said now was an ideal time to turn to stubble turnips or kale.

“You’ve still got another six weeks or so to sow kale,” he said. This would then be ready to feed after 10-12 weeks.

“Normally, when producers are desperate for feed they may choose to cut wheat as whole-crop instead. However, this year they don’t have the options as it’s not in the ground,” he said. Instead he explained stubble turnips could be planted now until August.

Mr Randhian said an unpredictable year such as this showed the importance of being flexible and growing a number of different crops.

“It’s better to have a number of horses in the race,” he stressed. “If I was a farmer, my mission would be to produce as much home-grown forage as possible and grow a complete diet.”

He suggested grass, maize, some root crops, such as fodder beet and a protein crop.

“Having crops that are harvested at different times spreads the risk and man hours,” he explained.