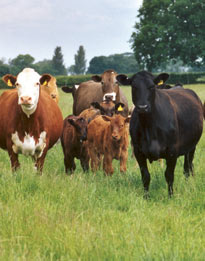 Generating sufficient returns from suckler cows to cover production costs and give a reasonable return on capital represents a significant challenge even for the best managed herds, according to SAC consultant, Douglas Bell.

Improved technical performance coupled with a reduction in fixed costs per cow would continue to be the benchmarks for success, Mr Bell told 300 beef farmers attending an SAC open day on the 3000 acre hill farm of Auchorachan, Glenlivet, Banffshire.

“At a time of strong finished and store cattle prices, it seems incongruous to discuss an industry in decline,” said Mr Bell. “However, despite strong consumer demand for beef and increased returns, the Scottish suckler herd, often described as the engine room of the sector, is facing continuous contraction.”

Beef cow numbers in Scotland have fallen by 13%, or 70,000 head, over the past 10 years and this trend is likely to continue as a result of the culling of pre-1996 born cows, the decoupling of support and fewer calves being born to beef sires.

“Underlying this trend and critical to the future of the Scottish beef industry, is the low level of core profitability associated with suckler enterprises,” said Mr Bell.

“It seems clear that in the absence of further significant price increases, some form of support system will be required to underpin the industry.”

Without some confidence in future support payments, significant re-investment represented too great a risk for many producers. Lack of confidence also led to “bird-in-the-hand” decision making, such as cashing in replacement heifers which exacerbated the downward trend.

“I can’t see any upturn in the suckler herd until 2011 at the earliest,” Mr Bell added. “Much will depend on the support system which replaces the Single Farm Payment after 2013.”

But beef specialists, Gavin Hill and Dr Jimmy Hyslop, pointed to a range of management factors which could help improve the profitability of suckler herds – or reduce losses.

Achieving a high calving percentage, Mr Hill emphasised, was more important to profitability than getting the highest price at market.

“Farmers like to get a high price for their calves at auction but if you are selling 6% to 7% fewer calves because of a low calving percentage, which herd is the most profitable?” Mr Hill asked. “The aim should be 96 calves for each 100 cows put to the bull.”

Profitability should be increasing as a result of the increase in cull cow values which effectively reduced the net cost of replacements and feeding home-grown barley this winter might be more economic than feeding blends or compounds.

“Reducing cow numbers is not the answer as it simply increases costs per cow,” Mr Hill pointed out. “The only way to reduce fixed costs is to spread labour and machinery costs over more cows.”

The solution on most farms was to “tighten the screws” and improve management, not change the system.

Dr Hyslop pointed to the efficient use of feed, with quality forage production and the exploitation of local feed resources, as key components of profitability.

Cheap grass should be used in the summer to lay down body condition. These fat reserves can then be mobilised in the winter to minimise feed costs and reduce the environmental footprint by reducing winter feed requirements.

Calving heifers at two years of age also helped to spread the cost of rearing heifers over more calves during the cow’s lifetime. The aim should be to grow heifers to achieve 65% of mature weight at first mating at 15 months.