Rather than always reaching for the plough, targeted direct-drilling could help grassland farmers reduce costs, get the grass back into rotation quicker and meet environmental targets.

In the document The Path to Sustainable Farming (PDF), released last year, the government specifically outlined its plans to reward farmers for improvements in soil health and water quality, together with reductions in carbon emissions.

With that in mind, livestock farmers are going to have to think differently when it comes to grassland reseeding.

Ploughing, particularly on wet soils, can increase subsoil compaction and rates of denitrification. It can also raise the risk of run-off and release sequestered carbon into the atmosphere.

Ploughing will always have a role in some fields to help address poor soil structure, and increase porosity and water infiltration.

However, where conditions are right, direct-drilling new grass into existing swards can be beneficial.

Some farmers are put off direct-drilling after experiencing mixed results. However, Rhys Owen, forage specialist for ProCam and Field Options, says success comes down to planning and management.

“The emphasis for success is really on getting the structure and nutrition of soils right,” he explains. Get that right and it is a strategy that will suit all grass mixes, including herb species.

He advises thinking about the following when considering direct-drilling:

1. Identify if the ground is suitable

Ploughing will be needed if the ground is uneven. If there is a level surface, a direct drill can be used. Whatever the strategy used, compaction should be addressed before reseeding.

Soils should be tested and any deficiencies in phosphate, potash, or pH addressed ahead of reseeding.

2. How will it fit in your grassland rotation?

Grass can be direct-drilled at different times of the year, depending on rotations and when you want to use it. Options include:

3. Spray off the old ley with glyphosate

The existing sward must be sprayed off with glyphosate so the new seedlings are not outcompeted by existing grasses.

When using a wide drill with spacings over 10-12cm, cross-drilling will be required to avoid gaps that can cause weeds to ingress. Roll afterwards.

The decaying grass material can acidify the surface of the soil, so applying 1t/ha of ground limestone after drilling is recommended. Alternatively, use a granular product.

Direct drilling tends to reduce the need for weed control after drilling, as the soil is not being disturbed.

Any required weed control should be carried out in the first five to six weeks after drilling.

Speak to an agronomist about an appropriate strategy.

Slugs are a particular issue on direct-drilled leys due to the lack of soil disturbance.

This underlines the importance of removing the previous vegetation and applying slug pellets.

New leys should be grazed after passing “the pull test” (see case study, below).

This will encourage the grass to tiller and establish well. 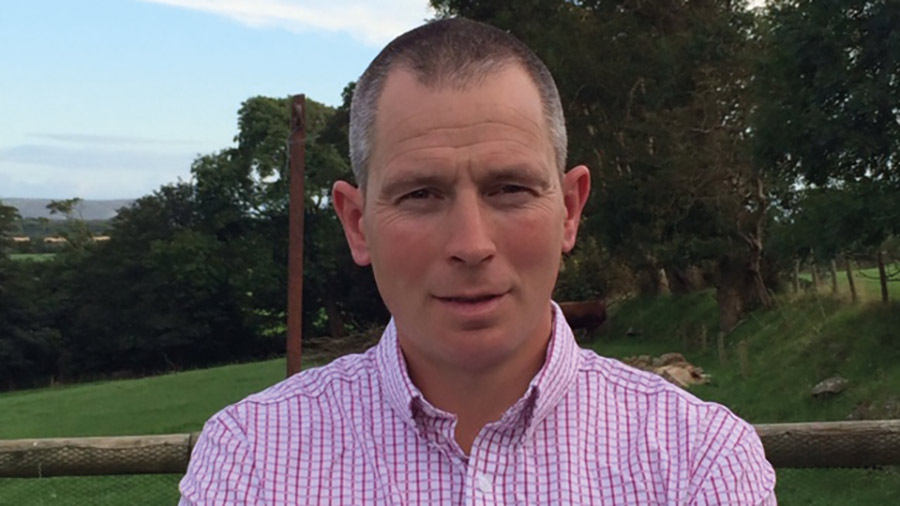 Rhys Williams has been direct-drilling grass reseeds for more than 15 years and uses the method on 90% of the grazing ground across five dairy units in north Wales.

He believes it is the right step to take from both a financial, environmental, and time point of view and believes all farmers should consider fitting it into their management system.

“When you plough a field, the goodness of the soil is in the top 10cm, and you are turning it over.

“It has taken years for that to establish and you’re turning its world upside down, so it has to start again. Plus, you are releasing a lot of carbon – and do you need to do it?” he asks.

Cost-wise, Mr Williams estimates a 39% saving when direct-drilling versus a full plough.

Direct-drilling on the milking platform also means the ground can go back into the grazing rotation after five to six weeks (in good conditions), compared with about eight to nine weeks when ploughing.

Mr Williams has five dairy units on Anglesey and the Llyn Peninsular. This includes one owned and four rented or in share-farming arrangements. All are spring block-calving systems focused on maximising milk from grazed grass using Jersey-cross cows.

Ploughing is still viewed as an important tool, particularly when reseeding newly rented ground or grassland on new units that may have been managed poorly or have “thick, matty grass” that is unsuitable for direct-drilling. However, Mr Williams will always avoid it where possible.

Graze hard or cut before you direct-drill

Avoid drilling into too much grass. Once a grazing paddock has been identified for reseeding, ensure the field is grazed to 1,500kg dry matter (DM)/ha and direct-drill the same afternoon or within 48 hours.

The drill operator is crucial. They will know how deep to go and will be able to decide when not to drill – for example, if the ground is too hard.
“I rely quite heavily on our contractor, Esmor Hughes,” says Mr Williams.

Mr Williams applies glyphosate about three days after drilling, rather than the conventional strategy of spraying before drilling. He believes this helps with moisture retention.

“By direct drilling into fresh grass, you are drilling in a 100% moisture bed. It gives those new, fresh seedlings a head start,” he explains.
(Note: speak to an agronomist before going down this route.)

Grazing management in the first six months is key

Introduce cows for a couple of hours the first time, then graze them on the ley roughly every 10-15 days through the season. Leave a residual of 1,500kg DM/ha DM. “Give it a real kicking and it wakes up and goes like hell,” Mr Williams advises.

A Scottish trial found that 1t/ha of carbon was lost into the atmosphere in the month after ploughing.

The trial was carried out by The Centre for Ecology and Hydrology and SRUC, and looked at nitrous oxide, methane, and carbon dioxide emissions released from two fields in south-east Scotland, which were ploughed two years apart.

Considering the soil can store about 50-100t/ha of carbon, Professor Bob Rees, head of the Carbon Management Centre at SRUC, says the losses weren’t that big.

It also seemed to be a temporary loss as improvements in grassland performance following a reseed meant a lot of that carbon was regained.

However, he believes direct drilling still has its merits: “If you can reseed without ploughing, and can get an establishment of a good sward, for a start it saves a lot of fuel and you might save a bit of carbon too,” he says.